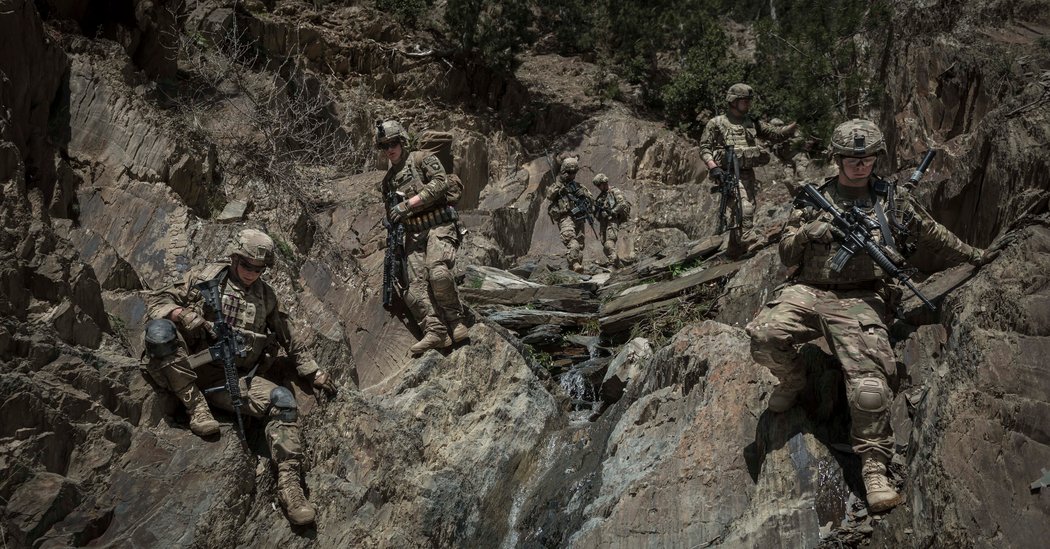 DOHA, Qatar — The United States signed a deal with the Taliban on Saturday that sets the stage to end America’s longest war — the nearly two-decade-old conflict in Afghanistan that began after the Sept. 11 attacks, killed tens of thousands of people, vexed three White House administrations and left mistrust and uncertainty on all sides.

The agreement lays out a timetable for the final withdrawal of United States troops from Afghanistan, the impoverished Central Asian country once unfamiliar to many Americans that now symbolizes endless conflict, foreign entanglements and an incubator of terrorist plots.

The war in Afghanistan in some ways echoes the American experience in Vietnam. In both, a superpower bet heavily on brute strength and the lives of its young, then walked away with seemingly little to show.

American efforts to instill a democratic system in the country, and to improve opportunities for women and minorities, are at risk if the Taliban, which banned girls from schools and women from public life, become dominant again. Corruption is still rampant, the country’s institutions are feeble, and the economy is heavily dependent on American and other international aid.

The agreement signed in Doha, Qatar, which followed more than a year of stop-and-start negotiations and conspicuously excluded the American-backed Afghanistan government, is not a final peace deal, is filled with ambiguity, and could still unravel.

But it is seen as a step toward negotiating a more sweeping agreement that some hope could eventually end the insurgency of the Taliban, the militant movement that once ruled Afghanistan under a severe Islamic code.

The war cost $2 trillion and took the lives of more than 3,500 American and coalition troops and tens of thousands of Afghans since the U.S. invasion in aftermath of the Sept. 11 attacks, which were plotted by Al Qaeda leaders under the protection of the Taliban.

The withdrawal of American troops — about 12,000 are still in Afghanistan — is dependent on the Taliban’s fulfillment of major commitments that have been obstacles for years, including its severance of ties with international terrorist groups such as Al Qaeda.

The agreement also hinges on more difficult negotiations to come between the Taliban and the Afghan government over the country’s future. Officials hope those talks will produce a power-sharing arrangement and lasting cease-fire, but both ideas have been anathema to the Taliban in the past.

“I really believe the Taliban wants to do something to show that we’re not all wasting time,” President Trump said in Washington hours after the agreement had been signed. “If bad things happen, we’ll go back.”

In rambling remarks on Afghanistan at a news conference on the coronavirus epidemic, Mr. Trump also seemed to suggest that the Taliban might be America’s newfound allies.

Secretary of State Mike Pompeo, who was in Doha for the signing ceremony, seemed more cautious in his assessment of the Taliban’s future behavior.

“The agreement will mean nothing — and today’s good feelings will not last — if we don’t take concrete action on commitments stated and promises made,” Mr. Pompeo said.

The Trump administration has framed the deal as the long-awaited promise made to war-weary Americans, for whom the Afghan war has defined a generation of loss and trauma but has yielded no victory.

At the height of the war, more than 100,000 American troops occupied Afghanistan, as did tens of thousands from about 40 nations in the United States-led NATO coalition.

The war has gone on so long — the first allied warplane and cruise missiles struck on Oct. 7, 2001, and American boots hit the ground in numbers on Oct. 19 — that many young Afghan soldiers and their coalition partners have no memory of its onset.

Retaliation against Al Qaeda and its allies among the Taliban was the catalyst that drove the American invasion. But it has been a dawning sense of futility, perhaps best demonstrated in the American acceptance of relatively small concessions from Taliban in the agreement, that has driven efforts of successive administrations to find a way out.

Even in the description of Al Qaeda in the agreement, the Taliban refused to accept the word “terrorist.” The language focuses on the Taliban’s commitment to prevent future attacks, rather than any regrets over the past.

From the start of the talks, late in 2018, Afghan officials were troubled that the Taliban had blocked them from participating. They worried that Mr. Trump would abruptly withdraw troops without securing conditions they saw as crucial, including a reduction in violence and a Taliban promise to negotiate in good faith with the government.

The chief American envoy, Zalmay Khalilzad, signed on behalf of the United States. Mullah Abdul Ghani Baradar, a current Taliban deputy and a figure from the original Taliban government, signed for the Taliban. The two shook hands as the room erupted in cheers.

Some Taliban members in attendance chanted “Allahu akbar,” or “God is great,” a cry of victory.

More than 1,200 miles away during the signing, another senior American official, Defense Secretary Mark T. Esper, was with Afghan officials in Kabul to ease the Afghan government’s concerns. Joined by NATO Secretary General Jens Stoltenberg, they issued a declaration asserting the United States’ commitment to helping sustain the Afghan military.

Mr. Esper emphasized that if the Taliban violated pledges, “the United States would not hesitate to nullify the agreement.”

President Ashraf Ghani of Afghanistan called for a moment of silence for war’s victims and said, “Today can be a day of overcoming the past.”

The best-case prospect laid out by the deal signed on Saturday could go far beyond America’s disengagement. It raised the hope of ending a conflict that began more than 20 years before the United States invasion, when the Soviet Union’s forces invaded the country and the United States began supporting the guerrilla resistance against them.

But behind the hope lies a web of contradictions, and a large degree of ambiguity that has Afghans worried.

The United States, which struggled to help secure better rights for women and minorities and instill a democratic system and institutions in Afghanistan, has struck a deal with an insurgency that has never clearly renounced its desire for a government and justice system rooted in a severe interpretation of Islam.

Though the Taliban get their primary wish under this agreement — the withdrawal of American troops — they have remained vague in commitments to protect the civil rights that they had brutally repressed when in power.

Among the Taliban, bringing the world’s strongest military power to the humbling point of withdrawal has widely been seen as a victory. A day before the signing ceremony at the Doha Sheraton hotel, the Taliban’s multimedia chief described it as a historic landmark for proclaiming “the defeat of the arrogance of the White House in the face of the white turban.”

But at the signing ceremony, Mr. Pompeo warned the Taliban to moderate their celebration.

“I know there will be a temptation to declare victory,” he said. “But victory for Afghans can only be achieved if they can live in peace and prosper.”

The deal’s conditional schedule for the withdrawal of the remaining American troops specifies that in the first phase, nearly 5,000 are to leave Afghanistan in 135 days. The withdrawal of the rest, to be completed within 14 months of the signing, will depend on the Taliban keeping its end of the bargain.

The insurgents pledged to keep international terrorist networks such as Al Qaeda from using Afghanistan as a base for attacks. And the United States pledged to work toward the gradual removal of Taliban leaders from both American and United Nations sanctions blacklists.

But the deal leaves an awkward reality for the Trump administration: It has signed an agreement with a movement in which an officially listed terrorist group, the Haqqani Network, known for its campaign of suicide bombings, is integral to the leadership. The network’s leader, Sirajuddin Haqqani, is the Taliban’s deputy leader and military commander.

The United States also committed to seek the release of 5,000 Taliban prisoners, held by the Afghan government, and 1,000 members of government security forces from the Taliban side by March 10 — less than two weeks away — before the Afghan and Taliban sides are expected to start direct negotiations.

While American diplomats had pushed for a cease-fire, they settled for what they called a “reduction in violence” and tested it over seven days before the signing. Officials said attacks had dropped by as much as 80 percent.

With the signing of the deal, the U.S. and Taliban sides clearly stated their commitment to not attack each other. Just how much the Taliban will hold fire on Afghan security forces before a cease-fire is reached in Afghan negotiations remains a point of uncertainty and worry.

In recent years, the brunt of fighting has been borne by Afghan soldiers and police officers, many of them American-trained. But even some of them came to see U.S. troops as invaders, turning their guns on their American and NATO partners. More than 150 American and NATO troops have been killed in such “green-on-blue” attacks, including two American service members gunned down this month.

Mr. Khalilzad, the veteran diplomat leading the American peace efforts and himself a native of Afghanistan, long insisted that the United States was not seeking a withdrawal agreement, but “a peace agreement that enables withdrawal.”

The Taliban’s willingness to enter negotiations with other Afghans, including the government, over a political settlement has offered both hope and fear to the Afghan people.

The hope is that some kind of lasting peace can be reached. The fear is that the most difficult work lies ahead, and that the Taliban will be emboldened by the American withdrawal announcement to challenge a bitterly divided government in Kabul.

Much of the peace negotiations happened in a year of record violence from both sides. In just the last quarter of 2019, the Taliban carried out 8,204 attacks, the highest for that period over the past decade. The United States dropped 7,423 bombs and missiles during the year, a record since the Air Force began recording the data in 2006.

In the past five years, more than 50,000 members of the Afghan security forces have been killed, and tens of thousands wounded. The Taliban’s losses are harder to verify, but their casualty rate is believed to be comparable. Out of about 3,550 NATO coalition deaths in Afghanistan, nearly 2,400 have been Americans.