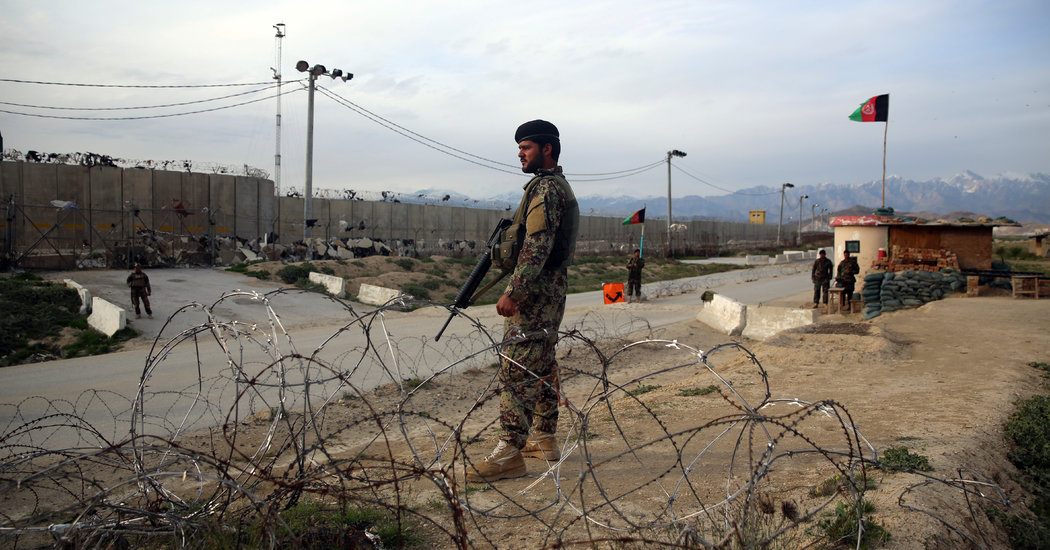 KABUL, Afghanistan — The Taliban have returned to an all-out offensive on the battlefield, killing dozens of Afghan security forces each day, officials say, even as American officials try to keep alive a scuttled peace deal to end the long war in Afghanistan.

The insurgents have ignored appeals for a cease-fire on humanitarian grounds as the fast-spreading coronavirus threatens to overwhelm the country’s feeble health system and wreck an economy already dependent on foreign donations. They accuse the United States of not upholding its end of the deal signed in February, which promised the release of up to 5,000 Taliban prisoners held by the Afghan government in a matter of 10 days, as a prelude to direct talks between the two Afghan sides on a cease-fire and power-sharing.

President Trump spoke over the phone on Wednesday with the emir of Qatar, where the Taliban’s negotiating team is based, about “the importance of the Taliban reducing violence and continuing discussions on prisoner releases,” the White House said. Mr. Trump’s peace envoy, Zalmay Khalilzad, and Gen. Austin S. Miller, the commander in charge of the American and NATO forces in Afghanistan, also traveled to Qatar this month for meetings with the Taliban.

There was no statement from the U.S. side about what was discussed, but the Taliban said the talks had focused on the “complete implementation of the agreement as well as delay in the release of the prisoners.” In the past, violence levels have been a major part of the discussion when the American military commander has participated.

With the peace deal seemingly stuck, the insurgents have continued to wield their main leverage, ratcheting up attacks across the country. Concern is growing that if the urgency of a pandemic cannot bring the two Afghan sides closer, the small momentum created for peace could evaporate, and the country could be thrown further into bloodshed, with the United States continuing to withdraw its troops and cut funding.

The country had just 1,330 confirmed coronavirus cases as of Friday, and 40 deaths. But disarray and a lack of widespread testing — just over 7,000 have been conducted, according to the country’s health ministry — mean that the true number could be far higher.

In that period, an average of 25 to 40 Afghan forces have been killed each day, according to two Afghan security officials. Government reports also show high casualties to the Taliban — on some days higher than the death toll of the Afghan security forces — but those figures could not be verified independently.

The one change in Taliban tactics seems to be that the insurgents are not currently publicizing each attack as vigorously across their robust social media and online platforms. They have also stayed away from any major bombings inside cities.

In one of the latest gruesome attacks in western Badghis Province, Taliban fighters began an assault late Thursday as an Afghan government militia unit was preparing food for a meal before fasting for the holy month of Ramadan. That attack killed at least 13 members of the militia, known as Public Uprisings, which is funded and supplied by the Afghan government.

“We didn’t think the Taliban would attack on the eve of the first day of Ramadan,” said Mubarak Shah Azizi, the unit’s commander. “The food we had prepared was left like that. We are busy with the burials today.”

The agreement between the Taliban and the United States, seen as a significant step toward ending the war in a more comprehensive peace deal, hit roadblocks as soon as it was signed.

President Ashraf Ghani, stuck in an election dispute that the United States was holding over his head by not recognizing his victory, opposed the prisoner releases that the U.S. had signed off on his behalf. Mr. Ghani eventually agreed to releases, in a phased manner and on his terms, only after U.S. officials attended his second-term inauguration.

The decree, which Mr. Ghani signed on March 10, said that 1,500 Taliban prisoners would be released as a “good will gesture” in batches of 100 a day, while the rest would be released in groups of 500 every two weeks if the insurgents reduced the levels of violence.

Now, more than a month later, and even as Afghan officials acknowledge concerns that a coronavirus outbreak will arise in the country’s prisons, only a third of the initial 1,500 prisoners Mr. Ghani said would be released have been set free.

There was a brief period of hope for getting the peace process back on track when a Taliban delegation visited Kabul this month for detailed talks with Afghan officials on the prisoner release. But the insurgents pulled their delegation out a week later, arguing that the Afghan government was not serious about making progress.

Afghan officials said the Taliban were demanding the release of 15 senior commanders who had been behind large attacks — something that the officials said they would consider later in the process but could not do at a time when the Taliban’s true intentions were clouded by the group’s daily violence.

Mr. Ghani, in his message on Thursday for the start of Ramadan, reiterated a call for a cease-fire.

“The wish of the Afghan people and government from the Taliban group is that in the current circumstances, where coronavirus has spread all over the country, accept our call for a cease-fire and peace in honor of the holy month,” he said.

The Taliban, who question Mr. Ghani’s honesty in the peace efforts, are reluctant to let go of violence as their main lever of pressure on the government.

“In a time that the lives of thousands of prisoners are being put into danger due to the coronavirus and hurdles are created in the way of the peace process and complete implementation of the agreement,” said Suhail Shaheen, a spokesman for the group’s negotiating team, “asking for cease-fire is not rational and convincing.”