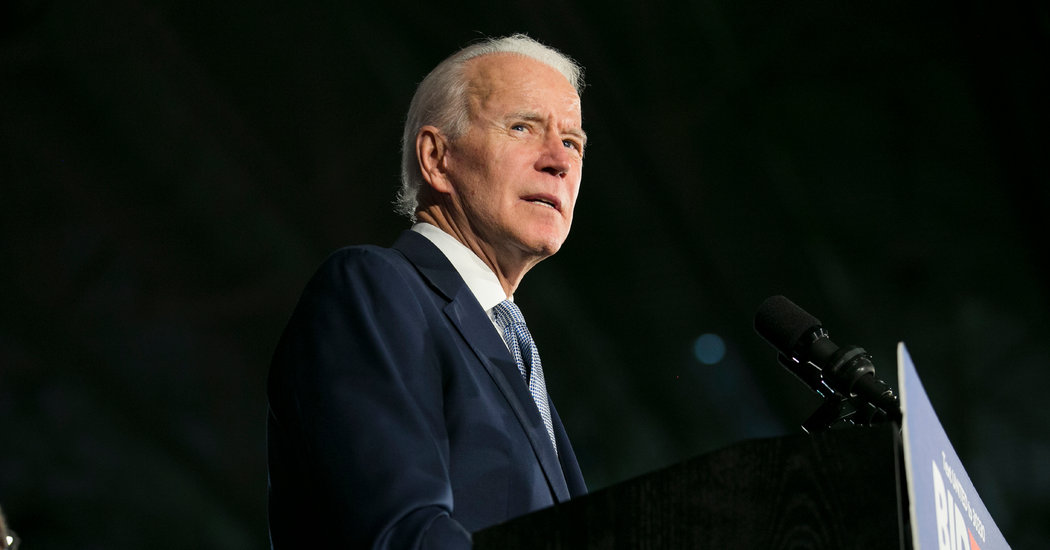 He may not have been their first choice.

They might have endorsed Elizabeth Warren or Bernie Sanders. They remembered, all too well, how he treated Anita Hill. They didn’t love what he called his “tactile” political style — the hugging, the touching — or that he seemed to laugh it off when confronted about it.

But he had championed the Violence Against Women Act. He had made progress on fighting campus sexual assault.

And — most importantly — he seemed to be the best bet to beat Donald Trump in November.

So, one by one, Democratic and progressive women diligently threw their weight behind Joseph R. Biden Jr. for president.

Then, with Mr. Biden the all-but-certain Democratic nominee, came Tara Reade. A former employee who had worked in Mr. Biden’s Senate office, Ms. Reade gave a podcast interview in late March, accusing him of sexually assaulting her in a Senate hallway in 1993.

On Friday, Mr. Biden, the former vice president, directly addressed the matter for the first time, forcefully denying that the incident took place. He did so in a conversation with Mika Brzezinski on the MSNBC show “Morning Joe,” though Ms. Brzezinski’s husband and co-host, Joe Scarborough, would sit this one out until the discussion moved on from Ms. Reade to the other news of the day. “It’s just going to be you and me,” Ms. Brzezinski told Mr. Biden.

It was 17 minutes of a cable television interview, and it was also a microcosm for the way this saga has played out: Women have been expected to discuss the allegation against Mr. Biden. Their male colleagues have not.

The particulars of Ms. Reade’s account, and Mr. Biden’s denial, have pushed the #MeToo movement — and the politicians who supported it, like Mr. Biden himself — into uncomfortable territory.

After three years of calling on elected officials, journalists and corporations to “believe women,” the movement faces a case where the truth seems especially difficult, if not impossible, to establish. National news outlets, including The New York Times, have investigated Ms. Reade’s allegation, and this past week, two additional women came forward to corroborate parts of her story. Yet there is no formal organization tasked with examining Ms. Reade’s claim. No eyewitnesses to the encounter. And with nearly three decades passed, memories of staff members from that time have grown hazy.

The debate over how to assess claims about decades-old behavior is not new, but it rarely takes place in the context of a high-stakes presidential race — in this case a heated and viciously personal contest, in the midst of a pandemic, in which discussion of sexual misconduct is likely to be a constant backdrop. If liberal Democratic voters abandon Mr. Biden, it may strengthen the re-election chances of President Trump, who himself has been accused of sexual assault at least a dozen times — though he is rarely asked about it.

“That’s what makes this so difficult,” said Lucy Flores, a former Nevada state assemblywoman who wrote last spring about her discomfort with how Mr. Biden had kissed and touched her during a 2014 campaign event. “We acknowledge that this is a position of impossibility for so many women, and yet so many of us are willing to do the right thing — as in, we will vote for him despite this.”

And so, the burden has been placed on women to defend Mr. Biden, and to face accusations of hypocrisy from some on the right, that progressive men have not had to endure.

In the weeks that passed between Ms. Reade’s podcast interview and Mr. Biden’s response, she has spoken publicly to a handful of journalists, and was in discussions to go on Fox News on Sunday morning; she ultimately decided not to, fearing retaliation after receiving emails and viewing some online posts she considered threatening. For Mr. Biden’s part, it was mostly Democratic women who were prompted to speak on his behalf — at times using the Biden campaign’s own talking points.

“I believe Joe Biden,” Stacey Abrams said. He’s a person of “great integrity,” Speaker Nancy Pelosi said. Hillary Clinton offered her endorsement in a town-hall-style event, though the allegation was not addressed. Women’s rights organizations, from Emily’s List to Planned Parenthood to Time’s Up, were largely silent as many tried to privately pressure Mr. Biden into making a public statement. When Mr. Biden did make a statement, on Friday, several groups noted that he addressed the issue, crediting him for speaking out.

“My chief concern is watching all of these powerful, important women leaders staking their credibility to Biden when the fact is there’s been no real investigation,” said Michele Dauber, a law professor at Stanford and Democratic fund-raiser, who helped write the sexual misconduct policies for the California Democratic Party. (She also led the charge to remove the judge who presided over the Brock Turner sexual assault case, the first judge to be recalled in more than 80 years.)

The political action committee Professor Dauber chairs, the Enough is Enough Voter Project, has called for an independent investigation into the claims.

“If this is true, and there is no investigation, his candidacy or his presidency could implode over it” — and, she noted, could take #MeToo down with it.

In a statement to The Times late Friday, Anita Hill, whose 1991 testimony in the confirmation hearings for Justice Clarence Thomas was overseen by Mr. Biden, echoed that call for a neutral investigation.

“Joe Biden has denied Tara Reade’s sexual assault allegations, but that should not be the end of the inquiry,” said Ms. Hill, a professor of law at Brandeis University. Given the significance of this moment, she said, the allegations against both Mr. Biden and Mr. Trump should be investigated, with results that are “made available to the public.”

“Without these essential elements, uncertainty about who to believe and whether it matters will continue,” she said. “How we proceed comes down to whether we take allegations of sexual violations seriously enough to insist that public institutions have fair procedures in place that protect individuals’ rights to come forward, and the rights of those who are accused to defend themselves.”

As many conservatives have noted, the response to Ms. Reade has appeared in stark contrast to the way that Democrats rallied around Christine Blasey Ford during the 2018 confirmation hearings of Justice Brett M. Kavanaugh, with Mr. Biden himself saying he believed that Dr. Blasey “should be given the benefit of the doubt.” The 2017 push for Al Franken to resign in the wake of sexual harassment allegations — an effort that divided Democrats — makes the moment even more fraught.

“Can we be anti-Kavanaugh and anti-Franken and then turn our heads?” said Samantha Ettus, co-founder of the Los Angeles Women’s Collective, which supports women running for office. (She said she was not speaking on behalf of her organization.) “I don’t think we can be selectively interested in #MeToo.”

Ms. Flores said the complex situation that women’s rights groups are facing today should ultimately lead to progress. “I do think that this will force an expanded conversation on what it means to ‘believe women’ given that the hypocrisy of that stance by Democratic and even some feminist leaders is on full display,” she added. This is a good thing, she said, because it “should have never been a catch phrase and, instead, been a full conversation of what it means to be a woman living in a fully male-dominated society.”

With Mr. Trump in the White House, and a country that is learning — very slowly — to reconsider the form that harassment and assault can take, Democrats have staked their political brand on the idea that all allegations should be taken seriously and that every woman has a right to be heard. But that doesn’t mean every woman is right when she speaks.

“I feel very trapped,” said Ana Maria Archila, the co-executive director of the progressive Center for Popular Democracy, of having to support Mr. Biden if he is the nominee. She was one of the two women whose confrontation of Jeff Flake, then a Republican member of the Senate Judiciary Committee, over how he would vote on Judge Kavanaugh’s confirmation went viral.

“What motivated me to join the fight against Kavanaugh was the threat that he represented to my country,” Ms. Archila said. Now, she added, “I feel like we’re in this situation where in order to protect ourselves, we have to do something that might feel morally incoherent — which is to vote for someone who was accused of sexual assault.”

Ms. Archila, whose organization endorsed Mr. Sanders in the primary, said she would vote for Mr. Biden if he was the Democratic nominee.

Tina Tchen, the head of Times Up Now, an organization dedicated to combating workplace harassment, drew a distinction between Dr. Blasey’s allegation and those of Ms. Reade’s. The Republican-controlled Senate had the power to investigate Judge Kavanaugh and instead, she argued, chose to rush him to confirmation. With Mr. Biden several years out of office, there’s no investigative body officially charged with looking into Ms. Reade’s claim.

“There’s not an employer — he’s not in the Senate where the ethics committee might do it,” she said. “At the end of the day, the employer is essentially the American people so that’s why we are stuck. For American people, this is frustrating. It’s painful.”

Adding to the frustration was Mr. Biden waiting weeks to address the allegation — instead relying on top female Democratic leaders, from Ms. Pelosi to potential vice-presidential prospects like Senator Kamala Harris of California, to answer questions on his behalf.

“Joe Biden needs to speak for himself — not through surrogates or statements,” Tarana Burke, the founder of the #MeToo movement, wrote as part of a thread on Twitter.

Mr. Biden, who had done a mix of local and cable news appearances, was not asked on camera about the allegation until Friday.

In the interview with Ms. Brzezinski, Mr. Biden responded to the allegation with a clear denial — and by noting how long ago it supposedly took place.

“I don’t know why after 27 years all of a sudden this gets raised,” he said in the MSNBC interview. “I don’t understand it.”

Three years after #MeToo gave the country a crash course in sexual misconduct, the women being asked to defend Mr. Biden might be less confused by that gap in time.

But they are confounded by the choice — or lack of choice, they say — they will face in November, between Mr. Biden and Mr. Trump, whose own allegations of sexual misconduct and history of derogatory language about women have not been a significant liability for him with his Republican base, even as female voters flocked to Democrats in the midterms.

Women “know the polar difference between Biden and Trump, who brags about assaulting women in his private life and whose public policies endanger women’s health and safety,” Gloria Steinem said.

If the 2020 presidential election were an ethics class, it might be what Kate Manne, an associate professor of philosophy at Cornell University, describes to her undergraduates as a question of choosing a lesser of two evils. Do progressive voters put aside an accusation they may believe is credible for the sake of what they believe to be the greater good of the country?

“I myself would vote for Biden in the spirit of voting against Trump, even though I do think there’s a degree of complicity there,” said Professor Manne, the author of the forthcoming book, “Entitled: How Male Privilege Hurts Women.” She noted that, as a permanent resident, she is not in fact able to vote, so the question is hypothetical. “But sometimes we do have to get our hands dirty in order to achieve something that seems vital at this point for the sake of the wider world.”

Still, she added, the circumstances are “maximally depressing.”