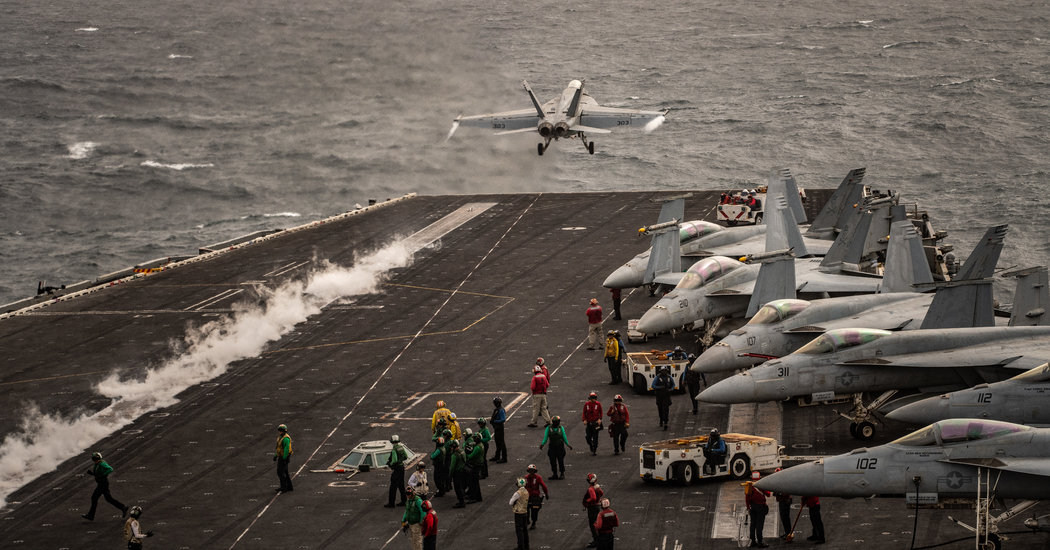 WASHINGTON — Iran successfully put into orbit what it called its first “military satellite” on Wednesday, after a string of previous failures, just hours before President Trump declared he had instructed the Navy to sink any Iranian fast boats that “harass our ships at sea.” The order, if followed, could sharply escalate the confrontations between the two nations.

While Iran was vague about the military capabilities of the satellite, the launch was notable in part because it originated from a mobile launch vehicle, similar to the kind the North Koreans are using to demonstrate they have the ability to roll out a missile and send it into space before the United States or its allies have time to respond. Secretary of State Mike Pompeo immediately condemned the launch as a violation of a United Nations Security Council resolution and declared that Iran would be “held accountable,” but did not specify what that meant.

As the C.I.A. director, Mr. Pompeo ordered an acceleration of a secret American program to sabotage Iranian launches. But after a string of major failures, the launch on Wednesday marked an unusual success, one Iranian television hailed with pictures of officers from the Islamic Revolutionary Guards Corps, many wearing masks, in a celebration in a control room.

The president’s abrupt tweet authorizing a far looser standard for the Navy to fire on Iranian fast boats seemed to take the Pentagon by surprise. Under the Navy’s rules of engagement, lethal force can be used only if American ships or personnel are put at risk — for example, by trying to ram a U.S. warship or place explosives near its hull. But blaring loudspeakers and weaving in the ship’s path, all part of the standard harassment techniques used by swarms of Iranian small boats, are not considered legally sufficient to open a salvo that could escalate into war.

Last week the Pentagon accused Iran of sending 11 fast boats to conduct “dangerous and harassing approaches” to six American warships in the Persian Gulf, and that appeared to be what led to the president’s warning “to shoot down and destroy any and all Iranian gunboats if they harass our ships at sea.”

The statement came after Mr. Trump’s former national security adviser, John R. Bolton, tweeted last week that the United States had “been too lenient in responding” to Iranian provocations. As a presidential candidate, Mr. Trump declared that when the Iranians “circle our beautiful destroyers with their little boats” they would be “shot out of the water.”

Taken together, the satellite launch and the warning to Iran suggest the two countries are escalating their episodic confrontations, even as both nations are fighting the coronavirus. And they may both have reasons: At home, the Iranian government and Mr. Trump’s administration have been criticized for mismanaging the response to the virus, and leaders in both nations may calculate that there is an advantage to reigniting confrontations with old adversaries.

While the swarming of small boats is a striking visual sign of those confrontations, the missile launch may well prove the more significant action. Iran’s civilian and military space programs — which American officials contend are closely related — have been plagued by mysterious explosions, failed launches and satellites that never deployed correctly. Roughly two-thirds of their orbital launches have failed, though it has never been clear how much of that has been a result of bad luck or technical incompetence, and how much has been caused by active American and Israeli sabotage programs.

Mr. Trump even tweeted out last summer a classified American satellite image of the burned remnants of a failed space launch, taunting the Iranians by declaring that “I wish Iran best wishes and good luck in determining what happened.”

But on Wednesday, what happened appeared to be a rare Iranian success — one Tehran said was the inauguration of its equivalent of the Pentagon’s new Space Force. That seemed a vast overstatement: It is unclear that the new satellite is transmitting images, or even how good they are compared with what is available on Google Earth and commercial satellite services.

Still, Mr. Pompeo confirmed the launch and noted that the government in Tehran had always claimed its satellite launches were only for commercial purposes and had no military use. That all reversed on Wednesday.

“I think today’s launch proves what we’ve been saying all along here in the United States,” Mr. Pompeo told reporters at the State Department. “I think Iran needs to be held accountable for what it’s done.”

Because the lofting of a satellite into orbit mimics some of the flight path of a nuclear warhead, such launches have long been considered akin to practice runs. The United Nations resolution Mr. Pompeo referred to does not explicitly prohibit such launches; instead, watered-down language agreed to as part of the 2015 Iran nuclear deal says that Iran is “called upon” to refrain from work on ballistic missiles designed to deliver nuclear weapons, for up to eight years. Iran insists it is not working on a nuclear weapon, and thus none of its missiles are designed to be “nuclear capable.”

The appearance of the mobile launcher struck both American and Israeli officials as a major advance. Previously Iran has launched its satellites from fixed sites, which are easy to strike before a launch. But the photos and video of this launch showed a mobile launcher similar to what the North Koreans have increasingly used. The system reduces warning time, and thus makes it harder to pre-empt a launch.

For the Revolutionary Guards, the launch has other symbolic value. The force had overall responsibility for the Iranian nuclear program, and some elements of the group have pressed for Iran to completely withdraw from the agreement — as Mr. Trump has — and to speed the restoration of its program. But so far the Iranian government has been proceeding methodically, hoping to split the European nations, China and Russia from the United States.

A year ago the Trump administration designated the Revolutionary Guards as a foreign terrorist organization, the first time the United States named part of another nation’s government as that type of official threat. In early January, American drones killed Maj. Gen. Qassim Suleimani, who headed the Quds Force, an elite unit of the Revolutionary Guards, drastically escalating tensions between Washington and Tehran.

Since then, however, tensions have de-escalated, and there was a theory that the coronavirus would distract Iran’s attentions, and its budgets. But there is little evidence that is the case.

Mr. Pompeo, speaking at the State Department, dismissed the importance of Mr. Trump’s tweet about sinking Iranian fast boats for harassing U.S. naval ships, noting that the president had previously given senior American officials authority to “take whatever action is necessary to make sure you can defend and keep our people safe.”

But a tweet does not constitute a military order, and a Defense Department official said the Navy had not received any formal policy directive from Mr. Trump ordering it to change its criteria for opening fire on Iranian gunboats. A U.S. military official said there had been no further incidents with the Iranians, fast boats or otherwise, since the one last week, when the Pentagon said Iranian boats “repeatedly crossed the bows and sterns” of Navy ships at high speeds, at one point coming within about 10 yards.

Speaking to reporters Wednesday, David L. Norquist, the deputy defense secretary, said Mr. Trump’s statement on Twitter was more of a warning to the Iranians than a change to the current rules of engagement.

Standing alongside Mr. Norquist, Gen. John E. Hyten, the vice chairman of the Joint Chiefs of Staff, said he liked “that the president warned an adversary.”

Mr. Trump has a history of Twitter announcements that seem at odds with traditional policy, including that involving the military and its rules and operations. Liberal critics of the president have suggested that, facing low approval ratings for his handling of the coronavirus response, Mr. Trump is searching for other ways to change the subject, demonstrate leadership and energize his conservative base.

American military units on the ground and at sea abide by strict rules on “escalation of force,” a ladder that includes audible warnings, flares and maneuvers before a shot is fired, often as a last measure.

Mr. Trump’s directive, in many ways, discounts this entire process and could lead to injury and death on an already crowded, and often confusing, waterway such as the Persian Gulf.

“Commanders are well aware and already have sufficient guidance to deal with these types of events,” said Vice Adm. John W. Miller, a retired commander of the Fifth Fleet, based in Bahrain.

The Trump administration has continued to impose its “maximum pressure” campaign of economic sanctions against Iran after the United States withdrew from the nuclear agreement. Tehran, for its part, has launched proxy attacks against American troops, interests and allies in the region.

The Revolutionary Guards Corps, which commands the fast boats, is a paramilitary organization, separate from Iran’s conventional military. The organization carries out operations across the Middle East, trains Arab Shiite militias and oversees businesses in Iran.