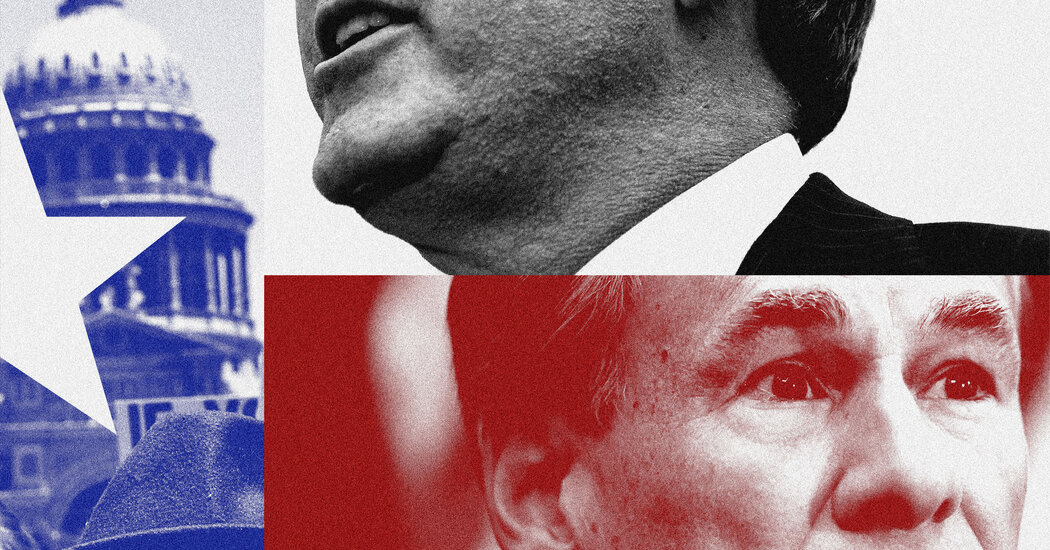 Gov. Greg Abbott of Texas has been going through a bumpy stretch of late. Last year he irked many of his conservative brethren by imposing a mask mandate and other public safety measures aimed at slowing the spread of the coronavirus — suspiciously non-MAGA moves that prompted some Republican state lawmakers to discuss trimming his executive authority. Then there was the state’s pathetic handling of this year’s winter storm, which left at least 150 (and possibly hundreds more) Texans dead and millions shivering in the dark without power. The governor’s initial stab at damage control — falsely blaming the outages on green energy sources — prompted pushback from those more concerned with facts than partisan palaver.

These are not the sort of stumbles the governor wants voters pondering as he prepares for his 2022 re-election fight. Already he is facing a primary challenge from the right by Don Huffines, a former state senator. And there is chatter about a possible run by the right-wing bomb thrower Allen West, an ex-congressman from Florida who migrated to Texas and won election as chairman of the state G.O.P. last year. A loud critic of the governor’s pandemic leadership, Mr. West stepped down as chairman this month to ponder his next political move.

How is an ambitious guy like Mr. Abbott navigating this turbulence? Simple. He’s borrowing a political play long favored by foreign adversaries who find themselves in sticky situations: Attack the U.S. government as a way to distract from one’s troubles and rally the public against an external foe.

Thus the governor has been making much ado about his big plans to deal with the influx of migrants across his state’s border with Mexico. Accusing the Biden administration of abdicating its national security duties, Mr. Abbott has announced that Texas is — wait for it — going to build a wall. The governor is using $250 million in general revenues as a down payment. For the rest of the cost, he is turning to online crowdfunding. If anyone wants to donate land along the border, he thinks that would be swell, too.

Mr. Abbott is not yet prepared to address some of the logistical nitty-gritty — like what to do about the land near the border that people aren’t inclined to donate or that the federal government owns. Those are quibbles for another day. For political purposes, what matters is that he has found an issue that resonates with conservatives and, with a little luck, gets them riled up enough at the feds that they forgive, or even forget, his bumbling.

Vilifying Washington is a time-honored tradition among state and local leaders — especially Republicans, for whom big government is an enduring boogeyman. This play works all the better in Texas, where state pride runs hot and on any given day some political clique is agitating to return the state to its glory days as an independent republic. The unofficial state motto — Don’t mess with Texas! — applies double to busybody federal authorities. (Unless they’re doling out disaster aid, of course.)

Texas’ attorney general, Ken Paxton, is another master of this two-step. He was elected in 2014 and quickly drew national attention as a conservative warrior. He led the legal crusade to dismantle Obamacare and opposed various environmental regulations and immigration policies that he considered a liberal assault on Texas.

During this time, Mr. Paxton was jowl deep in his own legal drama. His first year in office, he was indicted by a grand jury on charges of securities fraud and failing to register with the state securities board. He managed to win re-election in 2018, albeit narrowly, and the case has continued to drag out. He maintains his innocence and (surprise!) suggests the charges are politically motivated.

Last fall, Mr. Paxton’s legal troubles exploded. Seven members of his staff, including top aides, announced that they had asked federal authorities to investigate him for “violating federal and/or state law, including prohibitions related to improper influence, abuse of office, bribery and other potential criminal offenses.” The F.B.I. is reportedly looking into whether he inappropriately did favors for a wealthy political donor who hired a woman with whom the attorney general, who is married, was said to have had an affair. Mr. Paxton has denied all wrongdoing and claims the accusations are intended to derail an ongoing inquiry into other officials.

Many leaders would be cowed by such a development. Not Mr. Paxton. After the presidential election, he became a high-profile peddler of former President Donald Trump’s lies about election fraud. In December, Mr. Paxton filed a long-shot suit against four states that had helped give Joe Biden the win, effectively asking the U.S. Supreme Court to set aside the states’ election results (which had already been certified). The court rejected the case like the cheap PR stunt it was.

As weak as Mr. Paxton’s suit was — so weak that the Texas state bar is looking into whether it constituted professional misconduct — it delighted at least one person: Mr. Trump. Some political observers even speculated that Mr. Paxton was angling for a pre-emptive presidential pardon for whatever federal charges he might be facing.

A pardon didn’t materialize, but the question of the attorney general’s political future remains. He is up for re-election next year, and his personal legal controversies could prove problematic. His fund-raising late last year was looking pitiful until his election suit. “In the days after mounting the unsuccessful legal bid, Paxton raked in nearly $150,000 — roughly half of his entire campaign haul in the last six months of 2020,” reported The Dallas Morning News.

The more Mr. Paxton plays up his role as a dauntless MAGA fighter, the better his chance of persuading pro-Trump Texans to stick with him. He may stand accused of multiple crimes, but at least he’s not going to let the courts or the Biden administration or any deep state sympathizers boss him around. It’s not a perfect campaign message, but it may be his best option.