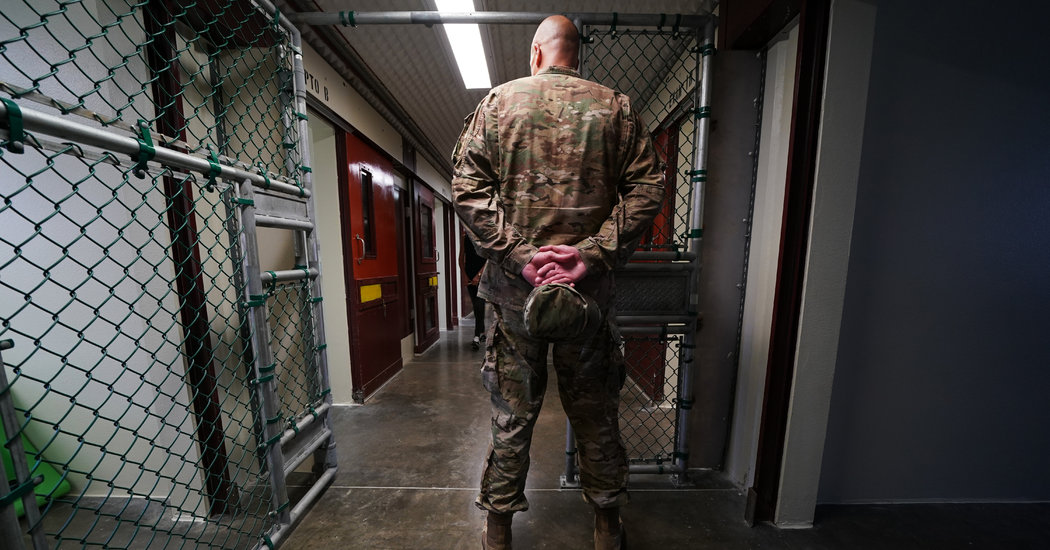 This article was produced in partnership with the Pulitzer Center on Crisis Reporting.

WASHINGTON — Next year is the 20th anniversary of the Sept. 11, 2001, hijackings that killed 2,976 people in New York, at the Pentagon and in a Pennsylvania field. For much of those two decades, the United States has been holding five men accused of helping plot the attacks.

But they have yet to come to trial. The military’s legal proceedings at Guantánamo Bay, Cuba, have lurched from setback to setback, disappointing the families of the victims who have watched in frustration and dismay. Then over the summer, a military judge finally set a timetable toward a trial that envisioned a start date early next year.

Now, that schedule has suffered a one-two punch that promises more delay. First, the coronavirus crisis has cut off most access to Guantánamo Bay, complicating the work of the prosecutors, defense teams, judiciary and support staff who shuttle between the base and the mainland. Then the judge abruptly announced last month that he was retiring from the Air Force and would leave the case next week.

Most pretrial work, including legal meetings, is on hold. The prison at Guantánamo does not allow the five defendants to meet with their lawyers by telephone or video link.

The departing judge, Col. W. Shane Cohen, has postponed his plan to begin the trial on Jan. 11, 2021, by at least two months. But it will be up to the next judge — who, when chosen, will be the fourth since 2012 — to work out when to start what is envisioned to be a yearlong trial.

The events of the last month are only the latest obstacles. Here are 10 key reasons it has taken so long.

The prisoners were held out of reach of the courts for years in the belief that they might have information that could stop another attack, help disrupt the Qaeda terrorist network and lead them to Osama bin Laden. Rather than take the defendants to New York to trial after their captures in Pakistan in 2002 and 2003, the United States dispatched them to a secret network of prisons run overseas by the C.I.A.

“C.I.A. was never interested in prosecuting,” one of the architects of the interrogation program, James E. Mitchell, testified this year at Guantánamo.

“That, I think was the core conflict between the C.I.A. and F.B.I.” in the black sites where defendants were held, Dr. Mitchell said. “The C.I.A. was not going to let them set off another catastrophic attack in the United States. They were going to walk right up to the line of what was legal, put their toes on it, and lean forward.”

It was not until September 2006 that President George W. Bush had the defendants transferred to Guantánamo for trial.

The Legacy of Torture

The years the defendants spent in C.I.A. custody complicated — some say contaminated — everything that would follow. During that period, Khalid Shaikh Mohammed, accused of being the architect of the attacks, was waterboarded 183 times. All five defendants were brutalized, isolated and kept incommunicado.

What they told their interrogators was inadmissible in court. So, to prosecute Mr. Mohammed and the others, the Justice Department had F.B.I. agents question them again at Guantánamo in 2007 in an effort to obtain confessions untainted by torture.

Defense lawyers have been challenging those F.B.I. interrogations in lengthy court proceedings, essentially a minitrial before a jury is chosen. The lawyers argue that the prisoners had been conditioned by the C.I.A. to tell future interrogators what they wanted to hear and want the judge to exclude their statements to the F.B.I.

Before the prisoners could be charged at Guantánamo, Congress had to approve new military commissions to replace a format the Supreme Court had shut down as unconstitutional. To normalize their detentions, the Pentagon gave each defendant a status hearing and first International Red Cross visit. Even then, years into their custody, the defendants were denied lawyers.

The five defendants were formally charged for the first time at Guantánamo in June 2008, more than five years after their capture. The death penalty case drew swift criticism as sacrificing due process for national security interests.

Then questions arose about the mental competence of one defendant and whether a manifesto attributed to all five — claiming responsibility for the attacks — could be the basis of a guilty plea. In a capital case, the rules of the war court required a military jury to hear evidence and then deliberate a punishment in a two-step process.

President Barack Obama, who had come to office promising to close Guantánamo, suspended the military trials for a period of review. One part of the administration revamped the military commissions with Congress while, on a separate track, Attorney General Eric H. Holder Jr. concluded that the Sept. 11 case should be tried in New York. The plan met with fierce resistance.

The case started anew on May 5, 2012, with new charges and a new law that gave war crimes defendants protections similar to those offered in national security trials in federal court.

A prosecution decision to try the five men together in a capital punishment case added layers of complexity and lengthened the process.

By law, each defendant gets a qualified death penalty defender, known as a learned counsel, who is paid by the Pentagon. These seasoned criminal defense lawyers demanded experts, consultants, more lawyers and information that might help them argue against the death penalty, known as mitigation evidence.

In a joint trial, a setback in one defense team slows progress for all. In 2014, the first judge split off the case of one defendant when an ethical issue arose over the F.B.I. turning a defense team member into a confidential informant. But the prosecutors insisted on reuniting the cases, adding months to the litigation.

The C.I.A. and prosecutors, invoking national security protections, have refused to turn over trial preparation materials to the defense lawyers or were slow to do so.

Initially, the lawyers said, the prosecutors provided the same evidence that they had prepared for the lower standard Bush administration-era trials. Lengthy pretrial proceedings — discovery requests, motions, hearings — ensued, with defense lawyers demanding, and the judges sometimes agreeing, that they get access to the kind of evidence they would see in a federal case.

As they did, the defense teams began complaining of government intrusions into their work, including the mysterious appearance of a former C.I.A. contract interpreter on a defense team and the discovery of eavesdropping equipment in their meeting rooms. The developments forced the trial judges to take testimony to try to resolve a series of ethical issues confounding fair trial rights.

Prosecutors declared last Nov. 1 that they had given the defense lawyers all the pretrial evidence they were entitled to see. But in the months that followed, they continued to turn over hundreds of documents, in part because of changing classification rules.

Years before, the chief prosecutor predicted that a White House decision to declassify a Senate Intelligence Committee study on the C.I.A. black site program would provide the defense lawyers with the information they needed for a fair trial. It did not. The 500-page, partly redacted summary that was released in December 2014 served as a road map for what information defense lawyers would seek to prepare for trial. Litigation continues on access to evidence.

Transcripts of public hearings are released to the public with portions blacked out, suggesting that something said aloud in court has been retroactively classified.

The years the men spent in C.I.A. custody raised questions about admissibility of evidence with no real precedent in American jurisprudence. The military judge’s job includes balancing what the government contends are the national security secrets of the case against the right of the men to a fair trial, a complex juggling act.

Because it is a national security case, a judge cannot order the government or its intelligence agencies to disclose information. Instead, the judge has the option of suspending a trial until they do — or dismissing the case.

Pretrial hearings and appeals courts have also had to address some basic legal questions confronting the hybrid federal-military court — like the definition of a war crime and how much international law applies to when the war on terrorism began. Prosecution and defense lawyers have been calling witnesses, making legal arguments and filing multiple briefs on these issues.

The crude court compound the Pentagon built at Guantánamo as a temporary outpost of the war on terrorism turned out to be expensive and inadequate.

Everyone but the men accused of the crime commute to Guantánamo from Washington, and points beyond for one- to three-week hearing sessions that have been plagued by flight delays, cancellations, mold-damaged offices and communications failures.

Two of the three military officers who presided as judges in the case chose to retire from service and leave the case; the third left the bench for a prestigious position in the Marine Corps.

Military defense lawyers typically spend two or three years on the case and then go back to the legal offices within their respective services to advance their careers, and earn promotions. Some court contractors find the pace of travel and crude conditions at Guantánamo too difficult and move on.

A 75-year-old capital defense lawyer who had been on the case for eight years is leaving for health reasons. His successor needs a security clearance, to meet the prisoner and time to read and absorb eight years of litigation, all hindered by restrictions stemming from the coronavirus.