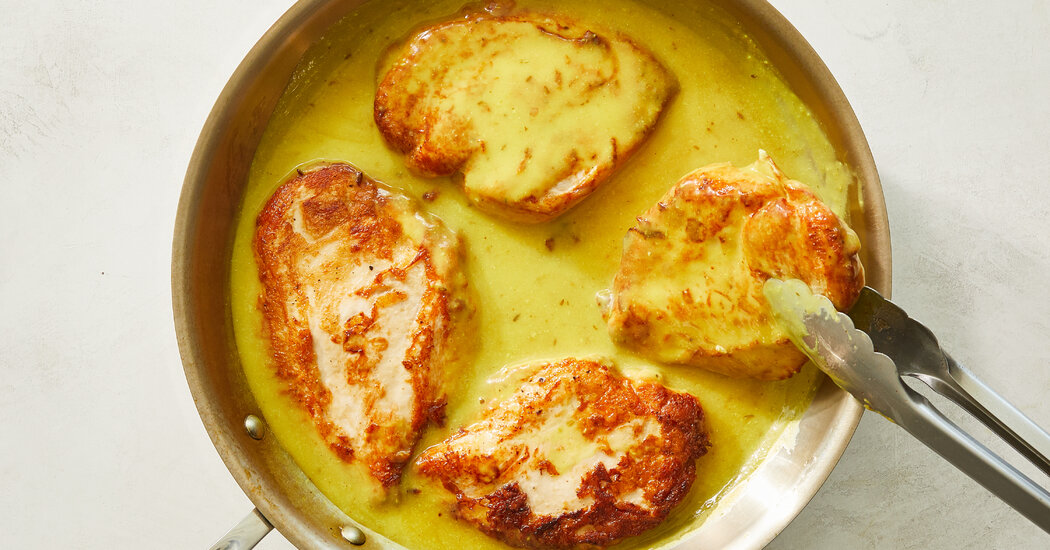 The joys of eating fried chicken are universal, writes Yotam Ottolenghi, and his spin on lemon chicken is sure to satisfy.

It’s easy to understand why. Chicken is, for those who eat meat, accessible and approachable to cook and consume in a way that red meat isn’t always. It’s uncomplicated, often quick and, crucially, ticks the “What will everyone around the table eat?” box. And that’s all before it’s even fried.

In the world of things that can be marinated, coated and fried, chicken is hard to beat. Once crispy and tender, chicken is the dish holding so many events together. Whether it’s a plate passed around a small family supper or a platter slid across the pass of a restaurant chain chances are there’s chicken on it.

Behind every fried or crispy chicken recipe is a story. Books are dedicated to tracing the roots and politics of Southern fried chicken, the role slavery played in its history and the racist stereotypes that accompanied it.

The name of a chicken dish can change and, in so doing, say much about the time it came from. That was the case with gong bao ji ding, the Chinese chicken dish with peanuts, named after the late-19th century governor of Sichuan, Ding Baozhen, whose official title was Gongbao. His association with the dish led Cultural Revolution radicals to change the name of the dish to hong bao ji ding — fast-fried chicken cubes. It stayed that way until the 1980s.

Or the story can be one of movement, the journey a dish goes on within just one family, where the same secret recipe is guarded and passed down from one generation to the next. History and politics, time and place: These are all big stories in which fried chicken plays a small but real role.

Rather prosaically, the story also can be of what is on the shelf and in the cupboards that needs eating on a weeknight. This is certainly the case for me when I cook crispy chicken at home. Central European immigrants who came to Israel during the 20th century turned the chicken schnitzel into a standard weeknight fare in most Israeli homes. The schnitzel (and an almost mandatory chopped salad and bowl of fries) that was served nearly every time I stayed for dinner at a friend’s house is what springs to mind when I open the fridge and cupboard in preparation for supper.

And then there are the stories and memories of fried chicken eaten with friends and strangers on my travels through Asia and back home in London — including the westernized Chinese lemon chicken I often loosely base my own version on.

Along with those memories, I have the ingredients that take up permanent residence on my shelves, which I reach for whenever I cook: fresh and preserved lemon, cumin seeds and cilantro, butter and broth, soy sauce and eggs. The result is a fast-food supper with a long, rich history: delicious enough to keep my kids at the table for long enough that I might actually get around to telling them some of the stories.

With this recipe’s obvious resemblance to chicken schnitzel, I thought of the usual accompaniments to schnitzel dishes in Austria: grüner veltliner or dry riesling. The grüner will most likely be Austrian, though I’ve had a few good versions from California. The dry riesling could come from anywhere. A rich Wachau from Austria would be excellent, as would a grosses gewächs from Germany or a grand cru from Alsace. While you’re at it, check out some of the better bottles from the Finger Lakes or Australia. Other options? A richer Sancerre would be great. So would a Chablis, maybe a Soave from the Veneto region of Italy or an assyrtiko from Santorini. I would not choose a red with this dish, but I would not hesitate to open a bottle of Champagne. ERIC ASIMOV