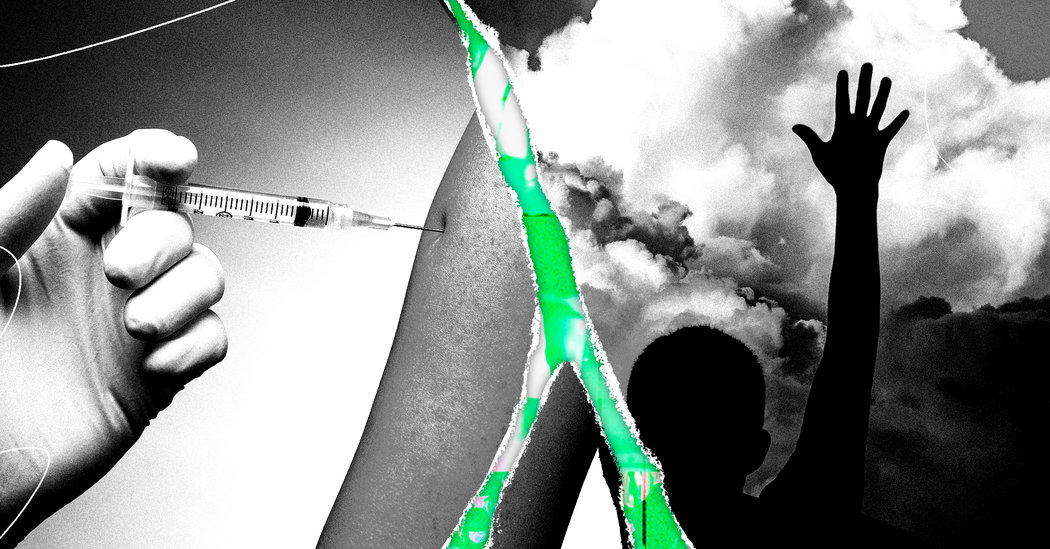 Scientists at Oxford University’s Jenner Institute raised hopes this week when they announced plans to expand testing for a potential coronavirus vaccine that if proven effective could be ready for emergency use as soon as September. But as my colleague Stuart Thompson explains, that’s an enormous if: Most vaccines take a decade or longer to make, and none has ever been developed in less than four years.

Cutting that record down to 12 or even 18 months would already require moving at “pandemic speed.” But last week, 35 members of Congress proposed an extraordinary practice that some scientists think could compress the timeline even further: deliberately infecting volunteers. Here’s what people are saying about the idea, known as human challenge.

Why would we intentionally infect people?

As it happens, the Jenner Institute is named for Edward Jenner, who invented the world’s first vaccine by doing just this. In 1796, more than a century before anyone even knew what a virus was, Mr. Jenner suspected that cowpox, a mild disease that milkmaids sometimes contracted, might confer immunity against the far more deadly smallpox. To test his theory, he inoculated an 8-year-old boy with the first virus (courtesy of a Gloucester cow named Blossom) and then deliberately infected — or “challenged” — him with the second.

Mr. Jenner’s theory proved correct — “vaccine” derives from “vacca,” the Latin word for cow — but his method has always been ethically fraught. Today, human-challenge studies are subject to strict oversight and authorized only for diseases that have treatments, like malaria or the flu. Any potential vaccine now also has to undergo three phases of clinical trials. Efficacy is tested in the third phase, where instead of being deliberately infected, participants simply go about their daily lives and researchers see whether those who received the vaccine prove less likely to contract the disease than those who received a placebo.

But the pandemic has raised two concerns with the process:

As a result, some experts have called for replacing conventional Phase III testing with human-challenge trials. In The Journal of Infectious Diseases last month, the bioethicist Nir Eyal and the epidemiologists Marc Lipsitch and Peter Smith argued that the idea, while risky, could shave months off the process. “Every week that vaccine rollout is delayed will be accompanied by many thousands of deaths globally,” they wrote. “If the use of human challenge helped to make the vaccine available before the epidemic has completely passed, the savings in human lives could be in the thousands or conceivably millions.”

Debatable: Agree to disagree, or disagree better? Broaden your perspective with sharp arguments on the most pressing issues of the week.

How would it work?

In the authors’ proposed design, the study would rely entirely on young, healthy volunteers who fully understand the risks of participating. (To the authors, “young” might mean 20 to 45; to others, 18 to 30 or even 18 to 25.) Conventional Phase III trials typically require thousands of volunteers, but a human-challenge trial might need only 100. All participants would remain isolated in comfortable state-of-the-art facilities, with access to “excellent” health care.

Who in the world would volunteer to get infected?

Actually, a lot of people, according to Josh Morrison and Sophie Rose, the co-founders of an organization called 1DaySooner, which has gathered signatures from over 8,000 potential volunteers. In The Washington Post, Mr. Morrison and Ms. Rose argue that the idea is not as radical as it sounds: According to one study, the coronavirus’s fatality rate for 20- to 29-year-olds in China was 3 in 10,000 — the same as that of kidney donation surgery and roughly twice that of childbirth in the United States.

“We and many others are willing to take on what we see as an acceptable individual risk to serve the public and the people we care about,” they write. “As willing and well-informed volunteers, whose autonomy ought to be respected, we feel challenge trials are justified if they mean a vaccine arrives even one day sooner.”

Would it be ethical?

We already allow people to risk their lives for the collective good, Dr. Lipsitch, Dr. Eyal and Dr. Smith say. Firefighters, for example, are routinely called upon to rush into burning buildings. (And today, of course, delivery drivers and grocery clerks are being asked to accept a level of risk they did not sign up for.) The question, then, is whether the study’s potential cost would be low enough to warrant its potential benefit. Besides recruiting only healthy, young volunteers and guaranteeing them the best care, the authors delineate four ways in which the study would minimize net risk:

But many researchers and bioethicists balk at the idea of coronavirus human-challenge trials, Jon Cohen writes in Science magazine. For one thing, the risks are hard to gauge, since the virus is so new that we don’t know how often people get seriously ill or what its long-term complications are. “Where you’re going to give somebody a virus on purpose, you really want to understand the disease so that you know that what you’re doing is a reasonable risk,” Matthew Memoli, an immunologist who stages human-challenge studies of influenza, told Mr. Cohen.

There are also thorny ethical questions beyond risks and benefits, according to Seema Shah, a medical ethics professor at Northwestern University. “Justice considerations also matter, such as whether the risks are fairly distributed,” she told Vox. “There are also other criteria: community engagement, fair selection of participants, robust informed consent, and payment that compensates for time and inconveniences.” And there lies another point of contention: Dr. Eyal advises against using high payments, which he says could take advantage of the poor.

Would it be worth it?

It’s possible that human-challenge trials wouldn’t actually speed up the process, according to Myrone Levine, a vaccine researcher at the University of Maryland who has conducted challenge trials since the 1970s. Infections are still climbing rapidly in many places, so conventional trials could reveal a vaccine’s efficacy on the same timeline. “I cannot imagine that this would be ethical and would really speed up what we have to do,” Dr. Levine told Mr. Cohen.

The benefit would also hinge on getting a lot of administrative ducks in a row, Dr. Shah said. For example, researchers would need to coordinate globally to ensure consistency across trials and to ascertain whether the Food and Drug Administration would even accept the results. And as Dr. Lipsitch, Dr. Eyal and Dr. Smith acknowledged, even if all goes well, more studies might be needed to prove the vaccine is safe and effective for older populations.

“We’re all looking for a Hail Mary, and it’s easy to see challenge studies as exciting and having a lot of promise,” Dr. Shah said. “But a lot of things need to fall into place to achieve that promise.”

“People Are Willing to Risk Their Lives for a COVID Vaccine. Should We Let Them?” [Vice]

“A coronavirus challenge trial is an ethical imperative” [The Atlantic]

Here’s what readers had to say about the last edition: Biden’s vice-presidential pick

John C. Kornblum, a former U.S. ambassador to Germany, from Berlin: “What about Val Demings, representative from Florida? She is experienced, well spoken and did very well during impeachment hearings. Demographically, who could be against a black, female former police chief from FLORIDA.” (Tom Coleman, a former Republican congressman, also wrote in to recommend Ms. Demings.)

Alma from New Mexico: “You did not mention Michelle Lujan Grisham, governor of New Mexico and former chair of the congressional Hispanic caucus. She has received national accolades for her handling of Covid-19. She is popular with both progressives and moderates.”

Bruce from Hong Kong: “I can’t understand why no one is mentioning Susan Rice, who should be the front-runner. Highly intelligent and effective and demographically appropriate, Rice would be the perfect foil for Biden.”

Deb from Minnesota: “What prior experience did Trump have to qualify him?”