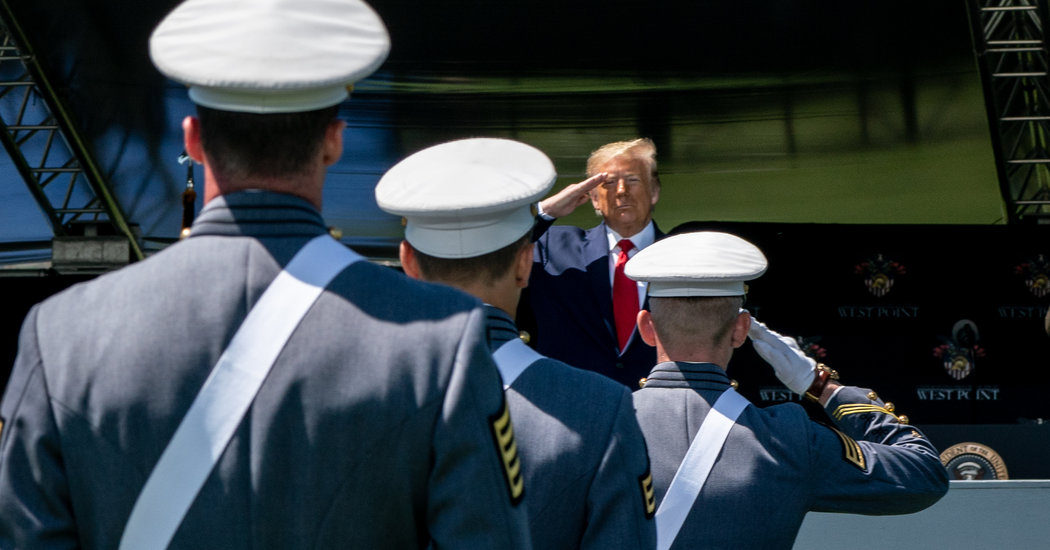 The first time I saw President Trump referred to as “Cadet Bone Spurs” I laughed, the second time I smiled and the third time I cringed. It’s an apt slur, but it lumps him together with all the other politicians whose military huzzahs contradict their personal histories and whose insult to our men and women in uniform can be reduced to dodging the draft.

Trump’s twisted and utterly transactional relationship with America’s armed forces is a bigger insult than that. For all his lip service to military service, his actions reveal a crude take on those who perform it.

And they have led now to a remarkable and remarkably public reappraisal — even repudiation — of him by people in the armed services, their leaders and veterans.

Some are finally coming around to a cleareyed view of a corrupt president. Others are venting a distaste for Trump that they’d previously downplayed or kept to themselves.

Even the most dutiful soldier has a breaking point, and even a culture of deference finds its moment of defiance.

Late last week Army Gen. Mark Milley, the chairman of the Joint Chiefs of Staff, issued an extraordinary apology for his participation in that awful presidential photo op made possible by the use of tear gas against peaceful protesters. But as Helene Cooper noted in a story in The Times, that’s just one example of an intensifying friction between the president and military leaders. Many of them don’t share his opposition to renaming bases that honor Confederate officers and disagreed with his push to have armed forces quell demonstrations.

“Trump’s Actions Rattle the Military World” was the headline on a separate story in The Times by Jennifer Steinhauer. Her conversations with members of the military, their families and veterans made clear that they might not back Trump to the extent that they did in 2016.

Then there are the generals and admirals, silent by custom but silent no more. What we’ve seen and heard from them over the past two weeks is unprecedented in my adult lifetime, a jolting departure from their norm of mutely supporting a sitting president, no matter their differences with him.

Trump has been upbraided by Navy Adm. Mike Mullen and Air Force Gen. Richard Myers, each of whom served as the chairman of the Joint Chiefs of Staff under President George W. Bush. “I’m glad I don’t have to advise this president,” Myers said in a CNN interview.

Together these admonishments amount to a metaphoric court-martial of the commander in chief.

Trump campaigned by arguing that presidents before him had abused the military by deploying troops to places — Iraq, Afghanistan — where the justification was suspect, the mission ill-fated and the end point invisible. He promised to avoid such costly entanglements while nonetheless spending more on military equipment. He wanted lots of it and he wanted it to gleam, just like his casinos. He told members of the armed forces that they’d never known a friend like him in the White House.

But what a nasty tongue and temper this friend has. At the start of his candidacy, he grossly mocked John McCain, who had been tortured for years in North Vietnam, by saying that he preferred war heroes who didn’t get captured.

He praised generals, sure, but only to assert his superiority to them. “I know more about ISIS than the generals do — believe me,” he said at one point in his candidacy, a cockamamie coda to his earlier boast that “there’s nobody bigger or better at the military than I am.”

He attacked Gold Star families, rage-tweeting against the father of Army Capt. Humayun Khan, who was killed in Iraq, and the widow of Army Sgt. La David Johnson, who was killed in Niger. They had dared to criticize him, and he put his vanity over their grief.

There’s no reverence in Trump, only convenience and expedience. Nearly two years and a hell of a lot of golf passed between his inauguration and the first time he could rouse himself to visit troops in a foreign combat zone.

During an earlier trip abroad in late 2018, he abruptly canceled his participation in an event at an American cemetery and World War I memorial in France when rain meant that he’d have to drive instead of taking a quicker helicopter flight.

The following year, again in France, he used the commemoration of the 75th anniversary of the D-Day invasion in Normandy as the backdrop for an interview in which he called Robert Mueller “a fool” and Nancy Pelosi “a disaster.” Everything to Trump is show business, and the graves of warriors are fitting props for a tirade on Fox News.

Trump approaches and appraises the military as he does all else: What’s in it for me? He needlessly sent troops to our southern border in the fall of 2018 because it advanced a narrative, which he contrived to help the Republican Party in the midterms, that America was being threatened by an invasion of migrants.

“My military,” he has said, and it’s no slip of the tongue. He sees the military as a vessel for his own glorification, to which end he openly yearned for a military parade in Washington, a titanic tribute to all the metal and munitions under his control.

“My generals,” he has also said, referring to the bevy of them — Mattis, his first defense secretary; Kelly, his second chief of staff; Army Lt. Gen. Michael Flynn, his first national security adviser; Army Lt. Gen. H.R. McMaster, his second — with which he stocked his administration. The phrase is the giveaway that, to him, they were trophies, their stars and medals merely ornaments on his ego.

And they were meant to defer, lest there be doubt of his own dominance. So he lied not only about firing Mattis, who in fact resigned, but also about having given him the nickname “Mad Dog.”

For Trump the military is a commercial enterprise and commodity. His complaints about N.A.T.O. boil down to balance sheets, focusing on the financial disparity between the United States’s military contribution and other countries’, as if our servicemen and servicewomen are service providers.

They rightly see themselves as more than that — and as more than the brutes of Trump’s childish imagination. Last November he cleared three members of the armed forces who had been accused or convicted of war crimes. He did so against the wishes of Defense Secretary Mark Esper and Army Secretary Ryan McCarthy, who worried about the military code of justice being undermined.

Code? Justice? Trump thinks and speaks in the language of wins, losses, brawn and bloodshed. He only pantomimes principle. His supposed reluctance to send troops into foreign lands gave way over recent weeks to his readiness to have them occupy our own land and engage in combat with their fellow Americans.

That he didn’t expect them to push back proves how little he understands them and how far short he sells them. They bring more than muscle to what they do. They bring heart, soul and intellect. Which is more than can be said for their commander in chief.

Listen to “The Argument” podcast every Thursday morning, with Ross Douthat, Michelle Goldberg and me.