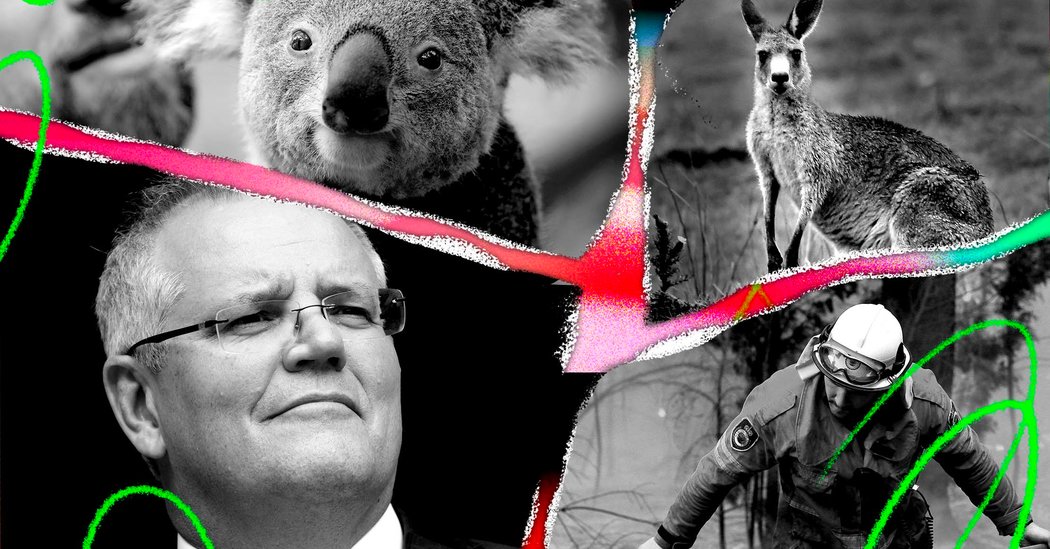 “An atomic bomb” is how one transport minister in Australia described the bush fires that continue to ravage the country. Having burned through an area larger than Switzerland and bloodied the sky as far as New Zealand, the fires have killed at least 25 people and hundreds of millions of animals, by some estimates. Here’s how people are making sense of the devastation, who’s to blame and how to help.

Like California, Australia is naturally primed to burn. But global warming has worsened the problem by turning greenery into kindling. (Average highs in Australia hit a record 107.4 degrees Fahrenheit in December, the start of the Southern Hemisphere’s summer, following the driest spring on record.)

This year, in what has become “the iconic representation of climate change impacts,” undeniable trends and unpredictable weather created “a horrific convergence of events,” according to Chris Field, the director of Stanford’s environmental institute.

As the Times columnist Paul Krugman has explained, it’s not really possible to say whether global warming “caused” a given extreme weather event, since weather can have several causes. But the influence of climate change on extreme weather in general, from fires to floods, is clear, and increasingly so.

“The question that we need to ask is, ‘How much worse are we willing to let this get?’” said an Australian National University climate scientist, Nerilie Abram. If this is what global warming of just over 1 degree Celsius looks like, Ms. Abram says, do we really want to see the impacts of 3 degrees or more? Because that, she adds, “is the trajectory we are on.”

One of the many heads of state leading the world down that trajectory is Australia’s prime minister, Scott Morrison. A member of the right-wing Liberal Party, he has proved hostile to calls for more robust climate action and pledged to outlaw forms of environmental protest.

But in some ways, Mr. Morrison has simply picked up where previous Australian leaders left off, writes the Australian novelist Richard Flanagan in The Times: Since 1996, successive conservative governments have subverted international agreements on climate change.

“Incredibly,” Mr. Flanagan writes, “the response of Australia’s leaders to this unprecedented national crisis has been not to defend their country but to defend the fossil fuel industry, a big donor to both major parties.”

The upshot is that “Australia will lose to climate change,” writes The Atlantic’s Robinson Meyer. Among wealthy nations, Australia is perhaps the most endangered by the changing climate, which is already locked into at least another half degree of warming.

This is a global problem, and it still isn’t being taken seriously

“Morrison is right about one thing — the only solution is global action,” writes Ross Gittins, the economics editor of The Sydney Morning Herald, Australia’s oldest newspaper. While Mr. Morrison certainly deserves blame, Mr. Gittins says, nothing Australia could have done by itself would have prevented the current devastation, since the country accounts for only 1.3 percent of global emissions.

“If in the past year (or the past decade) the world began to understand how dangerous climate change is, it certainly didn’t act like it,” Elizabeth Kolbert, the Pulitzer Prize-winning author of “The Sixth Extinction,” writes in The New Yorker. In the past 10 years, she says, more carbon dioxide was emitted than in all of human history up to the election of John F. Kennedy.

“Really waking up, and not just dreaming to ourselves that things will be O.K., has become urgent — beyond urgent,” she writes. She paraphrases fire officials in the Australian state of Victoria: “The world is in danger, and we need to act immediately to survive.”

[Related: “This apocalyptic Australian summer is our Sandy Hook moment.”]

Cutting carbon emissions is no longer enough, according to David Bowman, a professor of fire science at the University of Tasmania. “We still have to decarbonize but now we also have to adapt,” he writes in The Conversation.

California could learn something from Australia’s fire warning system, writes Diana Leonard in The Washington Post. After the disastrous Black Saturday fires of 2009, which killed 173 people, the country developed a more sophisticated, national warning protocol, which the chief executive of the Bushfire and Natural Hazards Cooperative Research Center in Melbourne believes has saved lives.

The National Weather Service provides something of a similar function for tornadoes and severe thunderstorms in the United States, but in California fire evacuation orders are issued by local law enforcement, a system that hasn’t always kept pace with the most extreme blazes. “A more centralized system, like the one in Australia, could allow the public to access information about the location and spread of a dangerous fire in real time,” Ms. Leonard writes.

‘Climate change is not the only man-made reason’

Australia has an arson problem, writes Paul Read in The Australian Financial Review. A senior lecturer at the School of Psychological Sciences at Monash University, Mr. Read notes that as much as 50 percent of Australia’s wildfires are potentially set deliberately. The New South Wales Police Force announced on Monday that it had charged 24 people in connection with bush fire arson.

“If we are to prevent bush fires and save lives, property and wildlife, we will also need to find solutions for the other more complex human dimensions of the causes of conflagrations like the ones we are now witnessing,” he writes.

HOW PEOPLE ARE HELPING

More than a million people have donated upward of $20 million to a Facebook fund-raising page started by the Australian comedian Celeste Barber, the largest ever such effort on the platform. The money will reportedly be distributed to the country’s firefighting services. Another Facebook fund-raising page has raised more than $4 million for WIRES, Australia’s largest wildlife rescue organization.

“Not all heroes wear capes.” An Instagram model named Kaylen Ward (alias the Naked Philanthropist) says she has raised $500,000 by direct messaging her nude photos to followers in exchange for proof of a charitable donation, reports Kim Bellware in The Washington Post. Instagram shut down her account, but she’s still active on Twitter, where other people have followed her lead.

MORE INFORMATION ON THE FIRES

The wildfires in pictures. [The New York Times]

“Why the Fires in Australia Are So Bad.” [The New York Times]

Here’s what readers had to say about the last edition: convincing climate change skeptics.

Ana from Australia: “Unfortunately, to our own peril, we still elect mediocre representatives with draconian beliefs … comfort over change is still the preferred way. Australia is a case in point. We could lead the way on climate change adaptation and innovation yet we choose mediocrity. It dumbfounds.”

Jane from California: “I often read or hear that climate change believers are ‘elite’ and look down on upon nonbelievers. My experience has been just the opposite. When the subject comes up, I find those on the right of the issue give me a knowing and condescending look, as if I’ve been hoodwinked.”

Eugene from New York: “I agree the earth’s climate has always changed and that coast lines and life-forms come and go. I am a climate denier only because I oppose most government reactionary policies that seek to hold back evolution. Let it change.”