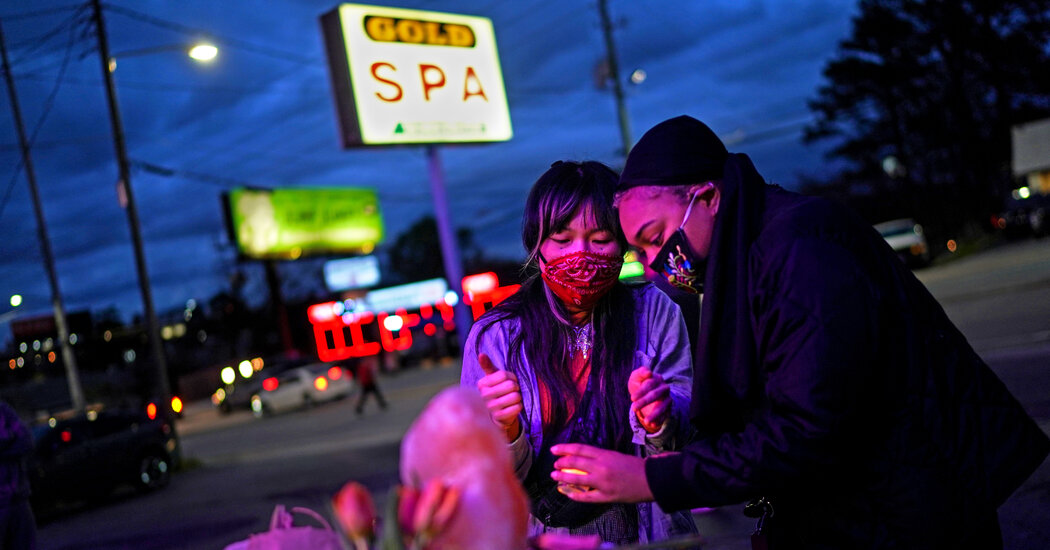 The victims lived at the nexus of race, gender and class.

Among the first things I did upon learning about the shootings at three massage parlors in the Atlanta area was to check in with a former massage parlor worker I met in 2019. At the time, I was reporting an article about a prostitution raid at a Florida massage parlor.

Unable to work during the pandemic, she was home alone when we spoke; the news from Atlanta hadn’t reached her yet. “Too frightening,” she said, when I sent her an article about what had happened. Robert Aaron Long, 21, who has been charged with the murder of eight people in Atlanta and nearby Acworth, six of them Asian women, had been arrested on his way to Florida — where she was — and where he planned on killing more, according to what he told the police. She worried for her colleagues. “Do you think someone will kill them? Am I in danger too?”

I didn’t know how to respond, in part because I knew so little about those killed in Georgia: Hyun Jung Grant, 51; Suncha Kim, 69; Soon Chung Park, 74; Yong Ae Yu, 63. (Daoyou Feng, 44; Xiaojie Tan, 49; Paul Andre Michels, 54; and Delaina Ashley Yaun, 33, were victims identified earlier.) In some massage parlors, women, often Asian, may sometimes perform sexual services. But I did not know whether those who died this week would have identified themselves as sex workers.

I have spent the past few years researching the various ways sex work intersects with race, class and gender, routinely amazed by how it connects to such disparate issues as criminal justice, gentrification, poverty, immigration and trans rights. I have come to understand sex work rights as an overlooked civil rights issue that deserves study. I soon found myself placing the Atlanta killings within the context of a horrific history.

In 1974, a soldier, Park Estep, 25, was convicted of a crime against two women at the Suezy Oriental Massage Parlor near Fort Carson in Colorado. According to court documents, he slashed the throat of Yon Cha Ye Lee, 32, an employee at the parlor, and stabbed her in the back. He then raped 36-year-old Sun Ok Cousin, the spa’s owner, before shooting her in the right temple, killing her and then setting her on fire. In 1993, Kenneth Markle III, 20, a medic at a U.S. military base in South Korea, was convicted of murdering Yun Kum-i, a 26-year-old sex worker. Her sexually-abused corpse was found near the base.

Since the terrible events this past Tuesday, much effort has been devoted to understanding Mr. Long — an earnest inquiry that betrays a particular kind of American naïveté. He claimed to have been driven by “sexual addiction”; investigators have not yet ruled out race as a factor. For now, we do not know whether the massage parlor workers who were killed would have considered themselves sex workers, and we may never know. But the answer is less relevant to their deaths than their murderer’s answer: Does it matter how one identifies oneself if a mass killer conflates any Asian woman in a massage parlor with a sex worker?

The stereotype of the Asian woman as simultaneously hypersexualized and submissive is borne of centuries of Western imperialism. An early documented instance of Asian fetishization can be found in “Madame Chrysantheme,” a thinly fictionalized account of a French naval officer’s time visiting 19th-century Japan. “Madame Chrysantheme” was wildly popular when it was published, and went on to create a subgenre of Orientalizing prose. The women in such accounts were, as Edward Said wrote in “Orientalism,” “creatures of a male power-fantasy. They express unlimited sensuality, they are more or less stupid, and above all they are willing.”

Later, an untold number of American servicemen in Korea and Vietnam had their first sexual encounter with Asian women. The U.S. military tacitly endorsed prostitution, considering it good for morale, and at times even explicitly encouraged troops to explore the local sex industry. According to the book “Sex Among Allies” by Katharine Moon, an assistant professor of political science at Wellesley College, an ad in Stars and Stripes, the main military newspaper, read: “Picture having three or four of the loveliest creatures God ever created hovering around you, singing, dancing, feeding you, washing what they feed you down with rice wine or beer, all saying at once, ‘You are the greatest.’ This is the Orient you heard about and came to find.”

These women, the first thousand or so, likely met their servicemen husbands in base towns across South Korea that sprang up during the Korean War, and the American occupation that followed.

In 1986 when the Immigration and Naturalization Service created the Korean Organized Crime Task Force to fight the scourge of its time, Korean prostitution, the authorities estimated that some 90 percent of massage parlor workers in the United States had come to the country as G.I. brides. These women followed their husbands to military bases. Once settled, some opened massage parlors, among the few opportunities for employment and financial autonomy available to immigrant women.

But beyond this specific history, structural violence against Asians in the United States has long been institutionalized. The racist, sexist nature of American society is hardly some aberrant, recent phenomenon that can be fixed through minor reform.

In 1882, the Chinese Exclusion Act became the first and only major federal law to exclude a specific ethnic group from entering the United States. It codified in federal law the xenophobia that had been building since the economic depression after the Civil War, in which Chinese laborers were blamed for taking jobs away from white people. The 19th and early 20th centuries saw horrific violence against Asian communities, including the 1887 Hells Canyon massacre, in which as many as 34 Chinese miners were killed, and the 1907 Bellingham riots, which drove out the entire South Asian population within three days.

Predating the Chinese Exclusion Act was the lesser-known Page Law of 1875, which was mostly applied to Chinese immigrants and allowed the barring of entry to those deemed to have agreed to services with “lewd and immoral purposes.” Immigration officials asked every female applicant, “Are you a virtuous woman?” They “apparently operated on the premise that every Chinese woman was seeking admission on false pretenses, and that each was a potential prostitute until proven otherwise,” according to “Unbound Feet” by Judy Yung, a historian and emerita professor of American studies at the University of California, Santa Cruz.

In this way, the Asian woman became an object of hatred, and lust, a thing to loathe, then desire, the distance between yellow peril and yellow fever measured in flashes.

It is hard to know what motivates a person. Early reporting has pointed to the tension between Mr. Long’s religious beliefs and sexual behavior he saw as compulsive, and the way this tension may have warped him. But Mr. Long is also a white man born in 21st-century America, a country with a rich history of violence against Asians. A place where the previous president was among the first to call Covid-19 the “Kung Flu,” and the “China virus,” possibly sowing the seeds for the nearly 3,800 acts of violence against Asians — mostly women — that followed. Did this history allow Mr. Long to see murder as a way of eliminating “temptation,” as he has said — a way of viewing Asians as expendable?

The events were also informed by class: These women, some of whom were working class, almost certainly died because they were at work. As working women of color, they existed at the terrible nexus of race, gender and class. It is, of course, often women who don’t speak English or are undocumented who are locked out of traditional labor markets, or are otherwise marginalized.

Many have framed the Atlanta spa shootings as a hate crime against the Asian community. Hate crime is a legal designation that serves to justify more policing. Despite being seen as a candidate supporting decriminalization of sex work, the New York City mayoral candidate Andrew Yang took the occasion to call for more funding of the New York Police Department’s Asian Hate Crime Task Force. The Atlanta police deployed additional patrols across the city, as did the N.Y.P.D., despite the fact that the police are the sources of instability in the massage-parlor-worker community. The irony is, of course, that had the women in Atlanta not been killed, they would have probably run the risk of being arrested by the very same law enforcement officers.

It is the instinct of the living to commemorate the dead, to make their passing not be in vain. I, too, am vulnerable to such impulses, and so I end by saying Georgia reminds us — I hope — that anti-Asian violence is also anti-women violence, anti-poor violence, and anti-sex-work violence, that our fates are entwined, that fighting oppression means fighting oppression not just in one’s own narrowly defined community, but also everywhere.

May Jeong is a writer at Vanity Fair and an Alicia Patterson fellow. She is at work on a book about sex work.