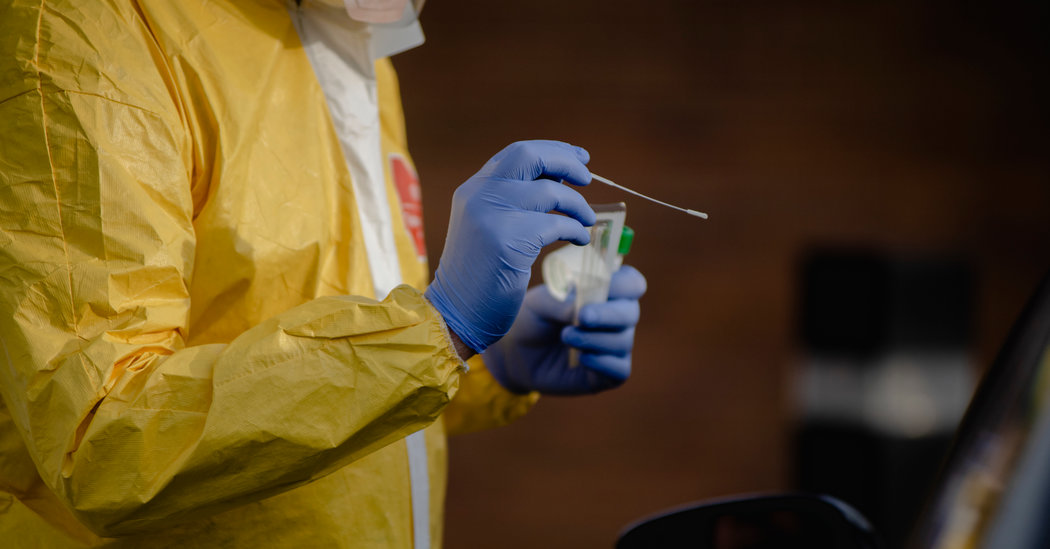 The World Health Organization, for weeks now, has been making an emphatic plea to countries around the world: Social distancing is crucial to stopping the spread of coronavirus, but it is only half of the equation. To suppress and control a pandemic of this magnitude, countries also must find and isolate every person infected with Covid-19 — including those with mild cases of the disease who don’t turn up in doctor’s offices or hospitals.

For just as long, however, officials in the United States have said something very different: If you suspect you’re infected, stay home. Even those who live in close quarters with someone who faces a higher risk of becoming severely ill or dying from the infection, have been discouraged from seeking testing unless they are having difficulty breathing.

There are valid if dismaying reasons for this guidance. A string of failures at the White House, the Centers for Disease Control and Prevention and the Food and Drug Administration have led to intractable delays in making diagnostic tests for coronavirus widely available in the United States. The same failures have sown confusion about where and how to get tests and have forced clinicians to make tough choices about how to ration the tests that are available.

But there is no question that the W.H.O.’s approach works better. Every region that has managed to get a coronavirus outbreak under control has succeeded thanks to a combination of social distancing and aggressive efforts to test as many people as possible. South Korea, for example, has tested some 274,000 people since February. The United States has tested just 82,000, the vast majority of them in the past few weeks.

Epidemiological testing — where the contacts of infected people are identified, tested in turn and isolated as needed — is the only way to fully break the chains of transmission, says Adhanom Ghebreyesus Tedros, head of the W.H.O. Without it, the virus will come roaring back as soon as social distancing guidelines are relaxed.

American officials have not absorbed that lesson. Even as some cities and states enter a phase of exponential spread, with the number of confirmed cases doubling every few days or so, social distancing is not being paired with the basic epidemiology that’s needed. Contact tracing — the practice of identifying and testing every person that an infected person came into contact with after they themselves contracted the virus — has not been prioritized. Almost no efforts are underway to develop the infrastructure for quarantining the exposed or isolating the infected outside their homes, away from their families. In some places, as the case counts surge, doctors who think they’ve been exposed are being advised to keep on working.

Worst of all, widespread testing — the foundation of both clinical care and broader containment efforts — has been disastrously slow to come online in the United States. President Trump and his team have repeatedly assured the country that tens of thousands of tests will soon be available in convenient locations across the country. But media reports make clear that confusion still reigns: It can take days and dozens of phone calls to access a test — at least it can if you don’t play professional basketball or star in the movies — and it still takes at least a few days to obtain results. In some cases, that’s because of backlogs; in others, it’s because of shortages.

The federal government’s mind-boggling failure has bred an apathy that’s as virulent as any microbe. With coronavirus outbreaks in the states of New York and Washington stretching into their second months, some experts have all but given up on testing, saying that the virus has probably spread well beyond our ability to contain it. Based on that logic, people who are known to have been exposed are being advised to isolate themselves at home but are not being tested to determine whether they pose a risk to roommates or relatives, nor are they being monitored for symptoms in any consistent or meaningful way. It also means those who have immunities can’t know it, and thus can’t know they are in a position to safely help those who are high risk.

In China, when officials realized that some 80 percent of Covid-19 cases involved infected people passing the virus to their family members, the government built large-scale isolation units where those people could be cared for a safe distance from their loved ones. In South Korea, when an early outbreak was pegged to one large church, health workers began tracing the contacts of more than 200,000 of that church’s members. They quarantined all of the people who were exposed, monitored them and sent anyone who became symptomatic to an isolation center.

In the United States, no such efforts are even in the offing.

It’s true that testing is not a panacea. When people venture out for a test, they risk becoming infected by someone else — or infecting others. But other countries have managed to mitigate such risks, and there’s no reason the United States can’t do so as well.

For one, leaders ought to dramatically increase the number of drive-through testing sites, which help minimize exposure to others. Epidemiologists also have suggested expediting contact tracing by redeploying health workers who have been screening passengers at airports to communities dealing with active outbreaks. Using cellphone tracking capabilities, as Israel is already doing, could also help, although the privacy concerns would be substantial and adequate protections would have to be put in place.

None of these measures will be cheap or easy to implement, but neither are the tactics that officials are deploying now. The alternative scenario, in which America maintains this status quo, will be nothing short of devastating.