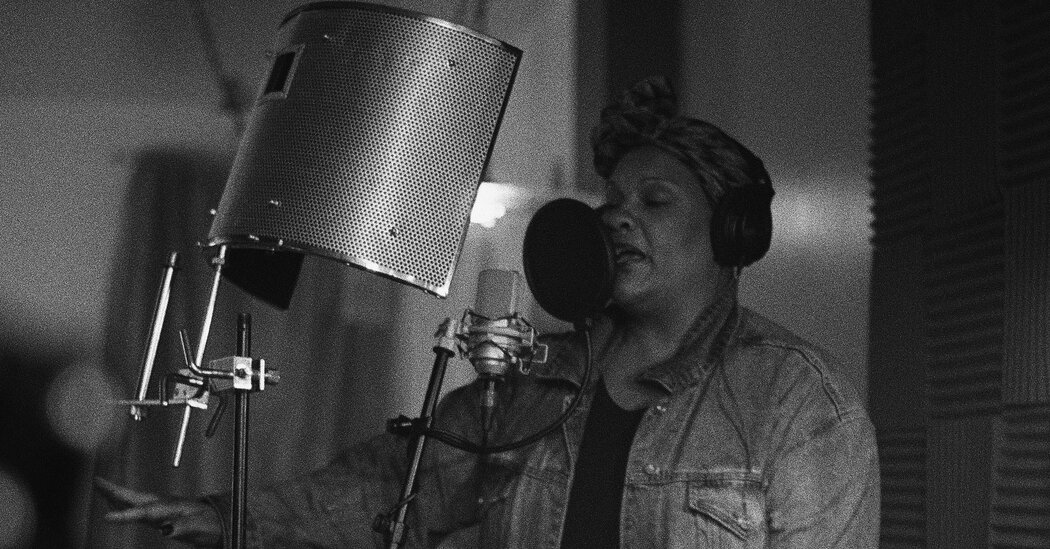 For purposes of clarity and in keeping with this publication’s style guidelines, I’m going to refer to Radha, the main character in “The Forty-Year-Old Version,” by her first name. The Radha Blank who wrote and directed it, and who plays Radha, will get the more formal last-name treatment.

You could argue that it’s a distinction without much of a difference, since this movie, premiering Friday on Netflix, is obviously — poignantly, hilariously, disarmingly — autobiographical. But Blank is equally concerned with what it means and how it feels to be an artist, which is to say a maker of metaphorical masks and literal alter egos. Radha, like her creator, is a playwright, and as such is well aware that authenticity can be both an imperative and a trap — in particular for an artist of color working in a milieu (downtown, nonprofit theater) dominated by white assumptions and sensitivities.

Radha seeks an alternative outlet in hip-hop, adopting the moniker RadhamMUSPrime as she spits raw, funny, intricate rhymes about the realities of being a Black woman facing middle age in 21st-century New York City. The stage name references the Transformers, but when she picks up the mic Radha is less transformed than revealed. She upholds a venerable rap tradition that sees keeping it real and self-reinvention as the same thing.

But I’m getting ahead of the story. And there is quite a lot of story here. The word that best captures “The Forty-Year-Old Version” might be “also.” It’s a romantic comedy and also a backstage farce; a classroom drama and also a grief memoir; a portrait of the artist as a no-longer-young woman and also a love letter to her hectic hometown. Blank enacts, on a large (and also an intimate) scale, the “yes, and” ethos of improv, expanding what might have been a modest chronicle of personal malaise and professional uncertainty into something almost epic in scope. It’s a catalog of burdens and also a heroic act of unburdening.

Radha, a decade after being named a promising under-30 talent, finds herself stalled. She pays the rent on her Harlem apartment with a teaching gig, managing a room full of rowdy, moody young adults (and lusting after one of them) as they fumble toward self-expression. Her long-suffering agent and childhood friend, Archie (Peter Kim), tries to tend the flame of Radha’s career, but she doesn’t always make it easy for him. Her emotional life is its own kind of mess. She ducks calls from her brother, who wants her help in sorting through their late mother’s things, and finds herself perpetually short on patience, stamina and time.

As a character, Radha is that rare comic creation who is both a genuinely funny person — her offhand riffs and muttered asides pop like tiny firecrackers of wit — and the butt of the universe’s jokes. As a performer, Blank finds a perfect balance of dignity and ridiculousness, of insecurity and strut. As a writer, she possesses an enviable ear for the profane, polyphonic music of New York speech in its various idioms. At least as impressive, given that this is her first feature, is her filmmaker’s eye, which captures the tumult of ordinary city life with graceful kineticism and composes it in elegant black-and-white images. (The director of photography is Eric Branco.)

Those monochrome frames are likely to remind many viewers of other New York movies, notably Spike Lee’s “She’s Gotta Have It” and Woody Allen’s “Manhattan,” which feels like an especially deliberate point of reference. Radha’s self-conscious, self-critical relationship to her own experience — her prickly, charming blend of vanity, defensiveness and emotional need — place her firmly in the Allen genealogy, even though she doesn’t have the sense of narcissistic entitlement that generally makes his characters tick.

What she has instead is an awareness — by turns resigned, resentful and resilient — of the cultural politics that affect her life and work. A production of her new play is quickly tangled up in white liberal bad faith, as the producer (Reed Birney) and director (Welker White) twist the story of a Harlem shopkeeper into a self-serving parable of gentrification. This strand of the movie’s plot includes its most painful and pointed satire, as Radha and Archie, a Korean-American gay man, try to succeed without selling out, chafing against and assessing the strategic value of their status as outsiders.

This is a matter of representation, and also of the demand for representativeness, for (in this case) Black stories with clear symbolic import, told in a way that will superficially challenge and ultimately flatter the sensibilities of a white audience. “The Forty-Year-Old Version” dramatizes this conundrum and also contends with it. Radha’s choice — between inauthenticity and invisibility, between becoming a symbol and being herself — is mirrored in Blank’s film.

For Radha, hip-hop offers a way to refuse the choice. “The Forty-Year-Old Version” wrings some fish-out-of-water comic mileage from the incongruity of her presence on the underground rap scene. Some of that comes from her own prejudices about the genre and the young men who are its avatars and devotees. Her ears are repeatedly harassed by a radio hit with suggestive lyrics (composed by Blank) about poundcake. When she shows up to record with an inscrutable beat maker known as D (Oswin Benjamin), she at first sees a stereotype rather than a fellow artist. Later, he turns out to be something of a soul mate, a taciturn yin to her voluble yang.

More than 20 years ago, Yasiin Bey, then recording as Mos Def, warned that “Hip hop will simply amaze you/craze you, pay you/do whatever you say do/but Black, it can’t save you.” “The Forty-Year-Old Version” doesn’t suggest otherwise, but it does insist on the power of aesthetics, and it revels in the pleasure and struggle of creative work. This comes through in the rambunctiousness of Radha’s students, in her belated appreciation of her mother’s paintings, in shots of street murals and sonic scraps of freestyle rhyming — in pretty much every frame of a film that, like its heroine, is grumpy, tender, wistful, funny and combative. Also beautiful.