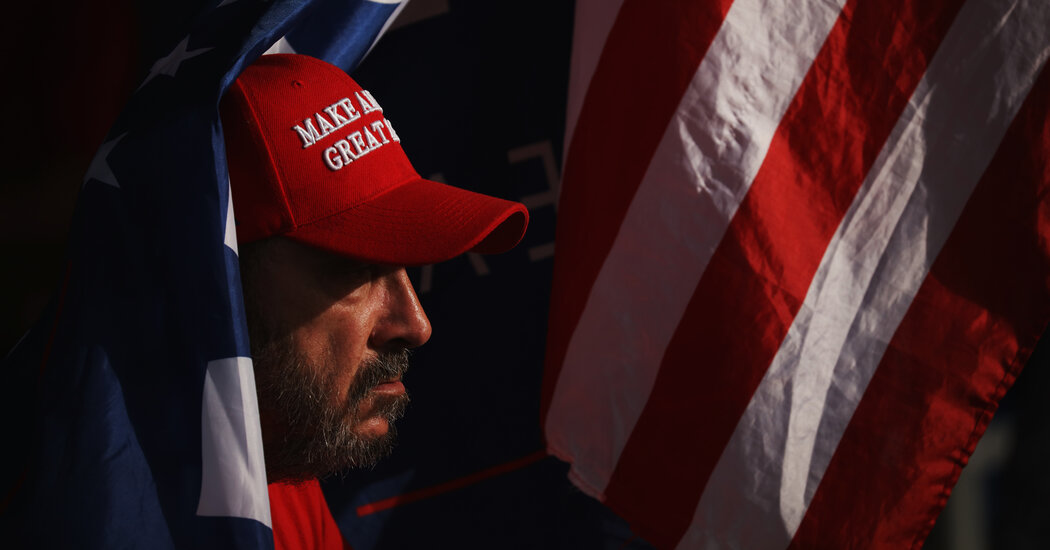 Trumpians are having a venomous panic attack.

Those of us who had hoped America would calm down when we no longer had Donald Trump spewing poison from the Oval Office have been sadly disabused. There are increasing signs that the Trumpian base is radicalizing. My Republican friends report vicious divisions in their churches and families. Republican politicians who don’t toe the Trump line are speaking of death threats and menacing verbal attacks.

It’s as if the Trump base felt some security when their man was at the top, and that’s now gone. Maybe Trump was the restraining force.

What’s happening can only be called a venomous panic attack. Since the election, large swathes of the Trumpian right have decided America is facing a crisis like never before and they are the small army of warriors fighting with Alamo-level desperation to ensure the survival of the country as they conceive it.

The first important survey data to understand this moment is the one pollster Kristen Soltis Anderson discussed with my colleague Ezra Klein. When asked in late January if politics is more about “enacting good public policy” or “ensuring the survival of the country as we know it,” 51 percent of Trump Republicans said survival; only 19 percent said policy.

The level of Republican pessimism is off the charts. A February Economist-YouGov poll asked Americans which statement is closest to their view: “It’s a big, beautiful world, mostly full of good people, and we must find a way to embrace each other and not allow ourselves to become isolated” or “Our lives are threatened by terrorists, criminals and illegal immigrants, and our priority should be to protect ourselves.”

This level of catastrophism, nearly despair, has fed into an amped-up warrior mentality.

“The decent know that they must become ruthless. They must become the stuff of nightmares,” Jack Kerwick writes in the Trumpian magazine American Greatness. “The good man must spare not a moment to train, in both body and mind, to become the monster that he may need to become in order to slay the monsters that prey upon the vulnerable.”

With this view, the Jan. 6 insurrection was not a shocking descent into lawlessness but practice for the war ahead. A week after the siege, nearly a quarter of Republicans polled said violence can be acceptable to achieve political goals. William Saletan of Slate recently rounded up the evidence showing how many Republican politicians are now cheering the Jan. 6 crowd, voting against resolutions condemning them.

Liberal democracy is based on a level of optimism, faith and a sense of security. It’s based on confidence in the humanistic project: that through conversation and encounter, we can deeply know each other across differences; that most people are seeking the good with different opinions about how to get there; that society is not a zero-sum war, but a conversation and a negotiation.

As Leon Wieseltier writes in the magazine Liberties, James Madison was an optimist and a pessimist at the same time, a realist and an idealist. Philosophic liberals — whether on the right side of the political spectrum or the left — understand people have selfish interests, but believe in democracy and open conversation because they have confidence in the capacities of people to define their own lives, to care for people unlike themselves, to keep society progressing.

With their deep pessimism, the hyperpopulist wing of the G.O.P. seems to be crashing through the floor of philosophic liberalism into an abyss of authoritarian impulsiveness. Many of these folks are no longer even operating in the political realm. The G.O.P. response to the Biden agenda has been anemic because the base doesn’t care about mere legislation, just their own cultural standing.

Over the last decade or so, as illiberalism, cancel culture and all the rest have arisen within the universities and elite institutions on the left, dozens of publications and organizations have sprung up. They have drawn a sharp line between progressives who believe in liberal free speech norms, and those who don’t.

There are new and transformed magazines and movements like American Purpose, Persuasion, Counterweight, Arc Digital, Tablet and Liberties that point out the excesses of the social justice movement and distinguish between those who think speech is a mutual exploration to seek truth and those who think speech is a structure of domination to perpetuate systems of privilege.

This is exactly the line-drawing that now confronts the right, which faces a more radical threat. Republicans and conservatives who believe in the liberal project need to organize and draw a bright line between themselves and the illiberals on their own side. This is no longer just about Trump the man, it’s about how you are going to look at reality — as the muddle its always been, or as an apocalyptic hellscape. It’s about how you pursue change — through the conversation and compromise of politics, or through intimidations of macho display.

I can tell a story in which the Trumpians self-marginalize or exhaust themselves. Permanent catastrophism is hard. But apocalyptic pessimism has a tendency to deteriorate into nihilism, and people eventually turn to the strong man to salve the darkness and chaos inside themselves.