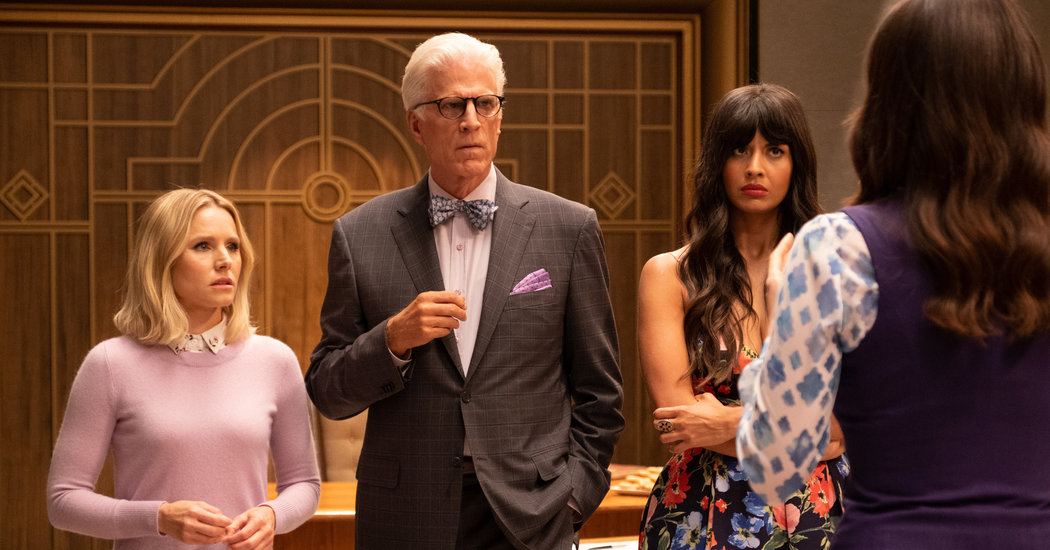 The hit television show “The Good Place,” now in its fourth and final season, has done plenty to popularize philosophy, particularly moral philosophy, which is at the center of the show’s story line, as well as its humor. To ensure the philosophical accuracy in the show’s scripts, the producers consult philosophical advisers. We asked one of the advisers, the philosopher Todd May, the author of “A Decent Life: Morality for the Rest of Us” and a frequent Stone contributor, to comment on and develop the philosophy being explored in the Jan. 9 episode. You can watch the full episodes of the show at NBC.com.

That’s how the moral philosophy professor Chidi Anagonye, played by the actor Will Harper on the NBC show “The Good Place,” prefaced his mini-lecture on cruelty on the show’s Jan. 9 episode.

Chidi then refers to some notes on his blackboard about the American philosopher Judith Shklar’s seminal 1982 essay, “Putting Cruelty First.” The essay, Chidi explains, “contends that we should consider cruelty as society’s primary flaw” and proposes the repudiation of cruelty as the primary political virtue, one that is both deeply human and deeply necessary. For Chidi, it is an especially pressing concern: He’s devising a new afterlife system that will prevent the imminent, instantaneous annihilation of humanity. But Shklar’s critique is applicable to any political view that holds itself to be so crucial to the future of a nation or of humanity that people can be cruelly mistreated in its name. (The current president could learn a thing or two from her essay, if he could learn a thing or two.) And embedded in this fictional scene is a critique of the very real moral failure of criminal justice systems and prisons.

It’s no accident that opposition to cruelty appears in “The Good Place.” Not only does it reflect the struggle of the show’s characters against the demon Shawn (Mark Evan Jackson), who seeks and even revels in cruelty, it is also tied to another concept, one that appears as a running theme throughout the series: redemption. It is the struggle of redemption against cruelty that animates the episode, toward which “The Good Place” has been building for several seasons now.

Let’s recall the trajectory of the show since early in the second season. What the demon Michael (Ted Danson) — the architect of The Good Place — discovers is that, contrary to Jean-Paul Sartre’s dictum in his play “No Exit,” hell is not always other people. He learns, in fact, that other people may be necessary for one’s own moral redemption.

As the seasons progress, Michael watches the flawed human beings around him help one another become better, to the point that they decide to help other people back on earth even when they believe there is no possibility of their being admitted to the real Good Place (the show’s humorous version of the “good” afterlife). That is, they are capable of redeeming themselves and one another.

This idea that redemption is an interpersonal affair, one that requires others, recalls Aristotle’s view in his “Nicomachean Ethics” that ethics is a branch of politics — that the ability to become virtuous requires a political arrangement, a social context, that can foster it. Aristotle, however, seemed to think that to become ethical requires the exposure to people who are already virtuous, people who can act as models for others . “The Good Place” begs to differ on that score: the show’s characters are hardly models of virtue when they meet. They are deeply flawed human beings who make one another better.

However, although Chidi and his friends Eleanor (Kristen Bell), Jason (Manny Jacinto) and Tahani (Jameela Jamil) can redeem one another, their redemption is refused by Shawn. He is interested in cruelty, not redemption. As Michael says of him after the group’s failure to convince him to give humanity a chance at survival, “He’s so focused on beating us that he’s willing to burn everything down.” In short, while Shklar puts cruelty first as anathema, Shawn puts it first as enticement.

But if Eleanor, the “dirtbag from Arizona,” and her colleagues can redeem themselves with their behavior, what does that say about humans?

The great anti-death-penalty attorney Bryan Stevenson has a motto: Each person is more than the worst thing they’ve ever done. This could stand as an epigraph for “The Good Place.” To treat each person as more than the worst thing they’ve ever done is to treat them as, to one extent or another, redeemable. That is precisely what Michael learns about the humans he sought to torture, and in doing so he learns to redeem himself. In fact he becomes, despite a certain sort of immortality (long story there), another human being seeking to be better, leading to perhaps my favorite line of the entire series: “Now we’re going to do the most human thing of all: attempt something futile with a ton of unearned confidence and fail spectacularly!”

But if each of us, when not entirely depraved, is redeemable, shouldn’t that redemption be recognized in the way we’re treated? Why must Shawn insist on eternal torture, “butt spiders” and all, for those who have shown they can do better? Why does he reject the proposal from Chidi and the others that people be given opportunities to redeem themselves? Why not have somewhere — a medium place, maybe — where people can take the knowledge they have from previous lives and, should they choose, put it to good use for their moral advancement?

The answer is simple: cruelty. Shawn identifies with his cruelty, justifying it (as do many demagogues) with the shortcomings of humans. It is O.K. to be cruel, he says, since humans are never really that good. If that sounds familiar, it should. It is one way in which much of the political history of the 20th century could be summed up.

There is another dimension to cruelty here, one that is pervasive in our country: prisons. Before the fourth season, “The Good Place” showrunner Mike Schur explained during a discussion that he wanted the critique of the point system used in the show to be also a critique of the prison system, a system in which one failure can lead to the cruelty of lengthy incarceration.

This becomes explicit in Chidi’s opening speech in the episode, when he says, “Imagine someone sells a joint and then gets locked away in a dangerous prison for years. The crime isn’t cruel, but the punishment is. That’s a problem.”

The idea that one can be treated as no more than the worst thing one has ever done is a recipe for cruelty, one that infests much of the prison system in this country. As someone who teaches regularly in a maximum-security prison, I am well aware of this. It is likely that many of the people I teach have done terrible things; but it is just as true that they are not only that, and our time together is an exercise in that recognition.

Near the end of the episode Shawn agrees to the proposal he rejected earlier to give humans a chance for redemption. He has discovered that cruelty, at least the same cruelty practiced over and over, can be boring. He confesses to Michael, “You corkscrew your first eyeball and you’re like ‘Man, I can’t believe they’re paying me to do this.’ By the trillionth it’s like … I should have just been a teacher.” There is another lesson here, one that I can only gesture at, but that brings its own worries: cruelty, in becoming boring, can also become normalized. That is a reflection for another time.

In this episode, and across the trajectory of its four seasons, “The Good Place” has, with the sort of wit and humor often absent from philosophy, offered a picture of humans as deeply flawed but ultimately redeemable, given the right circumstances. It is a picture of hope, one whose rejection produces the kinds of consequences with which history is littered. We would do well to heed that lesson without sacrificing the laughter that should accompany it. As Michael’s assistant Janet (D’Arcy Carden) says to the Judge (Maya Rudolph) during the episode, “Getting rebooted over and over made me a better not-a-person than I’ve ever been. Humans should get that same opportunity. ”

Todd May is the author of several books, including, most recently, “A Decent Life: Morality for the Rest of Us,” and a philosophical adviser to “The Good Place.”

Now in print: “Modern Ethics in 77 Arguments,” and “The Stone Reader: Modern Philosophy in 133 Arguments,” with essays from the series, edited by Peter Catapano and Simon Critchley, published by Liveright Books.