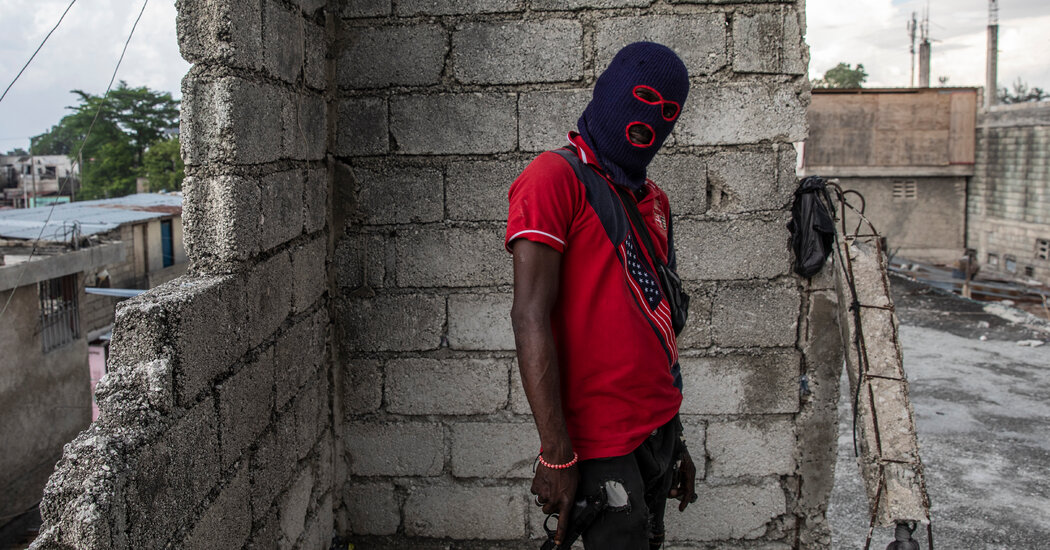 A little over a week ago, 17 individuals from a U.S.-based missionary group were abducted in the latest brazen attempt of its kind. In April, kidnappers interrupted an evangelical service being streamed on Facebook Live to seize the pastor and three churchgoers. A few days later, in yet another event, five Catholic priests, two nuns and three others were taken while heading to a church service in a suburb north of Port-au-Prince — only to be released after three agonizing weeks.

The incidents underscore the growing confidence and power of Haiti’s armed gangs.

Meanwhile, Haiti’s internal challenges continue to mount. It’s still reeling from an unresolved political crisis following the July assassination of President Jovenel Moïse and the humanitarian fallout of an August earthquake. But until the Haitian government gets crime under control and brings the gangs to justice, the restoration of the constitutional order and the country’s humanitarian and economic recovery will remain elusive.

That’s a tall order for a barely functioning state. And despite a history of failed interventions in Haiti, there is nonetheless a role for influential outside players. Protecting and delivering humanitarian aid, supporting Haitian law enforcement with intelligence and operations planning, and investing in marginalized communities to prevent gang recruitment are all areas where international actors can make a difference.

Gangs have a long, inglorious history in Haiti’s political fabric.

Former President François Duvalier, known as Papa Doc, guarded against military coups and popular dissent by organizing paramilitary groups that oversaw a reign of terror in the 1960s — a bloody time that resulted in some 60,000 extrajudicial killings. Likewise, Jean-Bertrand Aristide, Haiti’s first democratically elected leader, relied on gangs of urban slum dwellers to defend his presidency against being overthrown, which nonetheless occurred in both 1991 and 2004.

The United Nations began its stabilization mission in Haiti, MINUSTAH, during the post-Aristide elections in 2004. Abuses committed by U.N. peacekeepers on the Haitian population, as well as MINUSTAH’s unintended consequences, are well documented: Foreign troops repeatedly engaged in sexual violence against residents and even played a role in the initial outbreak of a cholera epidemic that claimed at least 10,000 Haitian lives.

During this time, criminal groups — including Aristide-aligned bandits known as chimères and legacy structures from the disbanded Haitian Army — capitalized on these scandals to shore up their own legitimacy, encouraging Haitians to view the U.N. troops as politically motivated killers. Some gang leaders fashioned themselves as contemporary Robin Hoods, distributing money, foodstuffs and stolen merchandise to their devotees. The vast majority, though, asserted their control over turf through violence, illegal detentions and extortion.

By 2006, Haiti’s homicide rate of 34 per 100,000 inhabitants was alarmingly higher than the regional average.

For all MINUSTAH’s significant shortfalls, over 12,000 blue U.N. helmets in the country nevertheless made a difference on the security front. During the mission’s 13-year operation, Haiti had peaceful transfers of power across four successive presidencies, the professionalization of the Haitian National Police (H.N.P.), and a 95 percent decrease in kidnappings over 10 years. Joint MINUSTAH and H.N.P. law enforcement operations resulted in the arrest or exile of powerful, charismatic gang leaders like Alain Cadet and Evens Jeune. And MINUSTAH recaptured some of the more than 4,000 prisoners who escaped from prison following the country’s 2010 earthquake.

At the conclusion of MINUSTAH in 2017, the transfer of responsibility from foreign troops to the H.N.P. coincided with renewed political instability, precipitating a constitutional crisis in 2020.

In the face of mounting resistance to his presidency, Mr. Moïse and his party fell back on a tried-and-true tactic in Haiti: They turned to the gangs to silence opponents. A coalition of armed groups soon expanded into opposition-led neighborhoods through extortion, kidnapping and sexual violence. Mr. Moïse is suspected of having enabled the repression through transfers of money, weapons, vehicles and even police uniforms. Corruption within the H.N.P. and a shortage of resources also led to a retrenchment of security services in some neighborhoods, reversing the hard-won gains in professionalism and reputation of the previous decade.

Some 165 gang factions operate in Port-au-Prince, the epicenter of Haiti’s crime wave. This year, gangs conducted at least 628 abductions — more than a threefold increase from last year’s total. And although the 400 Mawozo gang’s mass abduction of the missionaries has captured the world’s attention, kidnappings of American citizens are not new: In 2020 alone, at least nine U.S. citizens were kidnapped in Haiti.

Today, collusion between armed groups and political elites and the H.N.P.’s shortfalls have allowed Haiti’s gangs to supplant the state. By providing protection, services and food in a country where nearly half the population is food insecure, gangs are capturing the loyalty of the people. By wielding weapons and controlling territory, they are rendering themselves indispensable to the social order, enhancing their leverage over future political outcomes.

Elections to replace President Moïse have been postponed indefinitely. Until the caretaker government led by Ariel Henry can assure Haitians a fair contest — one in which they can express their vote free from intimidation — Haiti will remain in limbo.

There are no easy solutions to address these issues. But international organizations and regional governments do have a role to play in wresting control back from the gangs. A limited footprint of U.N. police could help the World Food Program and other aid organizations serve areas of the country where criminals are impeding humanitarian deliveries.

The U.N. should also enhance its advisory work with the H.N.P. and expand its mandate to support the justice system. From 2007 to 2019, a U.N. anti-impunity mission in Guatemala helped that country lock up criminals, dismantle illicit networks and nearly halve its homicide rate. Leaning on the Guatemalan mission as a blueprint, a similar effort could assist Haitian courts in tackling paralyzing case backlogs, while advising and protecting judges and prosecutors as they go after public officials guilty of conspiring with gangs.

Unfortunately, what the U.N. can accomplish will depend on what China, a permanent member of the Security Council, permits. As China has traditionally sought to limit U.N. involvement in Haiti, regional bodies like the Organization of American States should also seek to carry some of the weight.

The O.A.S. could eventually help verify elections in Haiti, but its immediate priority should be working alongside U.N. agencies and civil society to manage the exodus of Haitians fleeing the country’s violence for South America and the United States. Orderly refugee resettlement, negotiated among member states, would reduce the risk of Haitians falling prey to human traffickers and other criminal outfits operating in the Americas.

The U.S. government, for its part, should play a supporting role by underwriting these multilateral activities while increasing Covid-19 and food assistance. The State Department and the United States Agency for International Development can look to their modest yet measurable success in crime and violence prevention in Central America as a template for helping to protect Haiti’s most vulnerable communities, including training specialized units of the H.N.P. to dismantle the deadliest gangs.

Haiti’s recent history demonstrates that the dominance of gangs is not inevitable. But putting them on the run will require Haitian authorities to set aside petty power struggles and prioritize instead their most fundamental obligation: the security and well-being of Haitian citizens.

Paul Angelo (@pol_ange) is a fellow for Latin America studies at the Council on Foreign Relations and a Foreign Area Officer in the U.S. Navy Reserve.