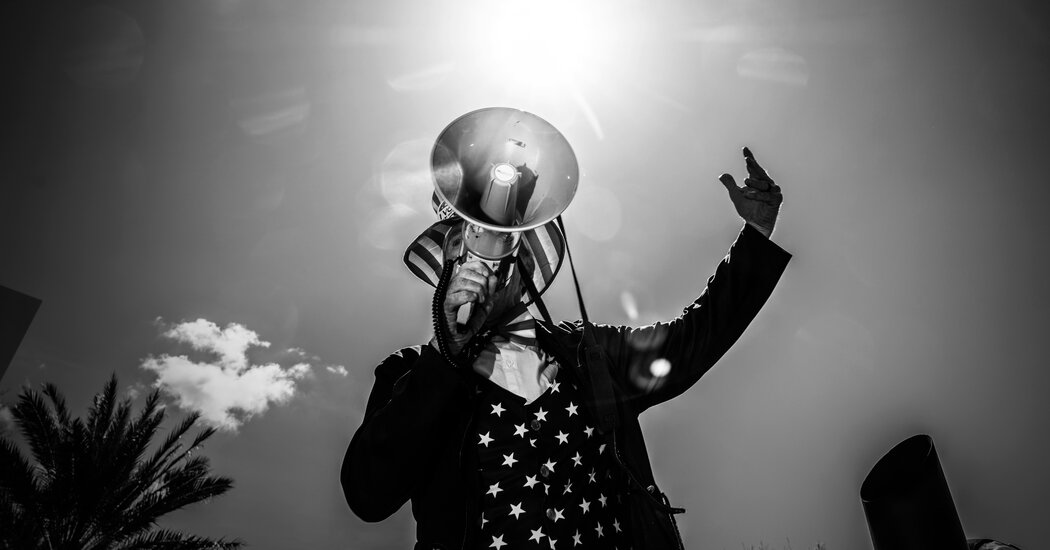 I have a foggy childhood memory of being home sick from school and watching the 1981 movie “Skokie.” It tells the story of a planned neo-Nazi march through Skokie, Ill., a suburb full of Holocaust survivors, and the Jewish American Civil Liberties Union lawyer, based on David Goldberger, who defended the Nazis on free speech grounds.

Little of the film has remained with me except for awe at the A.C.L.U.’s position. The odiousness of those it defended proved the purity of its devotion to the First Amendment. I’ve revered the organization ever since.

It would be hard to make a similar movie about Charlottesville, Va., where the A.C.L.U. helped an alt-right leader retain a permit to rally downtown in August 2017. In retrospect, part of the reason the Skokie case seemed clear cut, at least to my childhood self, was that the Nazis posed little physical danger to anyone. There were only 20 or so of them, and they were utterly marginal; no leading political figure called them very fine people. The stakes in the Skokie debate were symbolic. In Charlottesville, where a white nationalist riot led to a woman’s murder, they were life and death.

Thinking about the contrast, I can understand why the free speech libertarianism that I grew up with has fallen out of fashion. As The New York Times’s Michael Powell reported in a fascinating article last weekend, there’s a divide at the A.C.L.U. between an old guard committed to an expansive version of free speech and staff members who argue that a “rigid” view of the First Amendment undermines the fight for racial justice. Powell quoted Goldberger lamenting, “Liberals are leaving the First Amendment behind.”

Goldberger’s plaint is overstated. As the A.C.L.U.’s national legal director, David Cole, wrote in response, the organization continues to defend the speech of people progressives despise, including, in recent years, the National Rifle Association and Americans for Prosperity. Still, it’s pretty clear there’s a generational split over free speech, both in the A.C.L.U. and in liberalism writ large.

I wonder, however, if this divide could soon fade away, because events in the wider world are conspiring to remind the American left how dependent it is on a robust First Amendment. Civil libertarians have always argued that even if privileged people enjoy more free speech protections in practice, erosions of free speech guarantees will always fall hardest on the most marginalized. This is now happening all over the country.

In a number of states, Republicans have responded to last year’s racial justice uprising by cracking down on demonstrators. As The Times reported in April, during 2021 legislative sessions, lawmakers in 34 states have introduced 81 anti-protest bills. An Indiana bill would bar people convicted of unlawful assembly from state employment. A Minnesota proposal would prohibit people convicted of unlawful protesting from getting student loans, unemployment benefits or housing assistance. Florida passed a law protecting drivers from civil liability if they crash their cars into people protesting in the streets.

Meanwhile, the right-wing moral panic about critical race theory has led to a rash of statewide bills barring schools — including colleges and universities — from teaching what are often called “divisive concepts,” including the idea that the United States is fundamentally racist or sexist. Even where such laws haven’t been passed, the campaign has had a chilling effect; the Kansas Board of Regents recently asked state universities for a list of courses that include critical race theory.

Some on the left, no doubt, won’t see this multipronged assault as a reason to uphold neutral free speech principles, because they don’t expect such principles to be applied neutrally. Defending the speech of your enemies is obviously no guarantee that any of your enemies will defend yours.

Yet as the right-wing attack on left-wing speech accelerates, progressives are likely to discover that the credibility of their defenders matters. In recent years, the Foundation for Individual Rights in Education made a name for itself representing people who have run afoul of left-wing orthodoxies on college campuses, filling in what some see as a gap in the A.C.L.U.’s work. That has left FIRE particularly well positioned to fight bans on critical race theory and other attempts to silence the left.

This isn’t the first time that the A.C.L.U. has been riven over the scope of its commitment to free speech. J. Anthony Lukas wrote about a similar A.C.L.U. identity crisis in 1978, spurred partly by the group’s defense of the Ku Klux Klan. In a 1994 essay, the A.C.L.U. president at the time, Nadine Strossen, took on the accusation “that the A.C.L.U. is abandoning its traditional commitment to free speech and other classic civil liberties and is becoming a ‘trendy’ liberal organization primarily concerned with equality and civil rights.”

So there’s nothing new about the left growing weary of sticking up for reactionaries. But in the end, the A.C.L.U. has usually, in the teeth of internal conflict, stuck to its mission. Maybe every generation has to learn for itself that censorship isn’t a shortcut to justice.