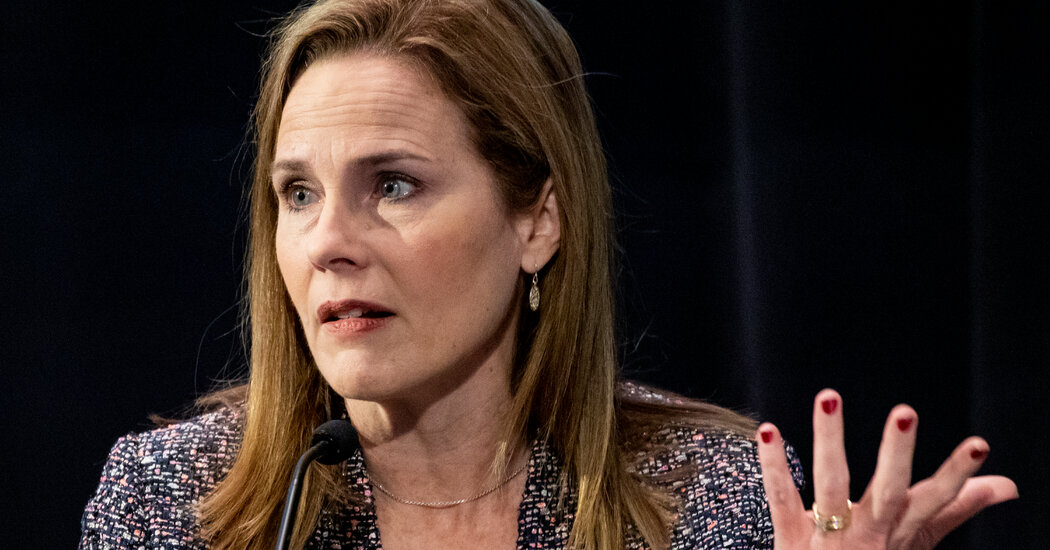 Ruth Bader Ginsburg became, late in her long and illustrious career, more than just a Supreme Court justice. She was a cultural symbol, a human distillation of an era and a cause, her special celebrity rooted in the way her fight for legal opportunities for women combined with her own extraordinary success in the spheres she opened up. As a jurist Ginsburg was one of the court’s four liberals, important but not singular; as the Notorious R.B.G., she embodied liberal feminism, a history of struggle and achievement condensed into three initials and one life.

Amy Coney Barrett, President Trump’s choice to take her seat, is a signifier of a different sort. In her combination of elite accomplishment with a faith and a family life that’s unusual among her high-achieving peers, what she condenses isn’t the recent history of feminism but a question that its success has created: Namely, can there be a conservative feminism that’s distinctive, coherent and influential, at least beyond quirky religious subcultures like the faculty at the University of Notre Dame?

By conservative feminism I mean something different from 1970s-era female resistance to the women’s movement, whether in its arch Joan Didion form or its mass-movement Phyllis Schlafly incarnation. Schlafly’s anti-feminism, the core women’s conservatism of the ’70s, argued that the push for female advancement was either unnecessary or destructive, that it gave women things they didn’t really need and it took from them — from mothers, especially — protections that they relied upon. Its icon was the beleaguered homemaker; the fact that Schlafly was herself such a vigorously public figure didn’t change her fundamental identity as a defender of the domestic sphere.

A conservative feminism today, on the other hand — again, if we can say that it exists — is adaptive rather than oppositional. It takes for granted that much of what Ginsburg fought for was necessary and just; that the old order suppressed female talent and ambition; that sexism and misogyny are more potent forces than many anti-feminists allowed. It agrees that the accomplishments of Barrett’s career — in academia and now on the federal bench — could have been denied to her in 1950, and it hails that change as good.

But then it also argues that feminism’s victories were somewhat unbalanced, that they were kinder to professional ambition than to other human aspirations, and that the society they forged has lost its equilibrium not just in work-life balance but also in other areas — sex and romance and marriage and child rearing, with the sexes increasingly alienated from one another and too many children desired but never born.

This diagnosis is not necessarily conservative; some of it might be endorsed by more radical feminists, for whom the alienation and disappointment is proof that enduring features of patriarchy and capitalism still need to be abolished.

The conservative prescription, though, is not to march deeper into Marx or Judith Butler but to integrate feminist insights with ideas from the old regime about the centrality of marriage, children and religious commitment to the good life.

This attempted integration doesn’t have a single dominant theorist — its theorizing probably peaked in the 1990s with writers like Barbara Dafoe Whitehead — but it has many American embodiments: professional women across the country (and, by extension, many husbands in their dual-earner homes) whose life courses generally resemble the rest of their class, but with certain choices that seem somewhat more eccentric or askew. That means shorter dating lives and earlier marriages, four or five children instead of two or fewer, and other more traditionally coded choices — more frequent churchgoing, denser social networks, living closer to extended family, work lives designed more around home life than the reverse.

By comparison with the average educated women’s life trajectory 80 years ago, these women look like Ruth Bader Ginsburg’s heirs. By comparison to the most prominent contemporary avatars of liberal feminism, however — including Ginsburg’s fellow female justices and the Democratic nominee for vice president — they look somewhat more like Amy Coney Barrett, even if the size of her family and the scale of her professional success make her an outlier in almost any company.

This means that, if elevated to the Supreme Court, she will probably enjoy more celebrity than the typical justice. She’ll be more of an R.B.G.-style cultural symbol — as A.C.B., Glorious or Notorious — with her own distinctive, if considerably smaller fan base, plus a certain type of critic who regards her fecundity as threatening or irresponsible, her claim to any kind of feminism a cheat. (Obviously if she plays a role in changing the court’s abortion jurisprudence, the latter antagonism will be sharpened.)

This is a substantial burden to impose on any public figure, let alone a mom with teenagers, and for conservatives who are ready to put her initials on a bumper sticker, two cautions are in order. First, human beings don’t always bear the weight that identity politics imposes on them, something that’s all-too-clear from the arc of the last great female conservative hope, a certain erstwhile Alaska governor.

Second, one reason that conservative feminism as I’ve described it doesn’t play a substantial role in our politics right now is that it hasn’t been distilled into a compelling policy agenda — pro-woman, pro-mother, pro-work-life-balance — by our increasingly male-dominated conservative party. (Another reason, of course, is that this party is led by Donald Trump.)

There are efforts to change this, including an interesting conservative attempt to draw on the work of Elizabeth Warren from her pre-Senate, more right-of-center days, but they haven’t come to fruition. And an originalist justice with a limited view of the judiciary’s ambit, which is what Barrett promises to be, is probably not going to be the leader that this effort needs, however much her personal story seems to embody its purposes.

Hence the reasonable test for any conservatism that takes Barrett for its avatar: What is it doing in its policymaking to make her kind of life, professionally impressive and personally full, feel more available and affordable and imaginable for women who aren’t nominated to the Supreme Court?