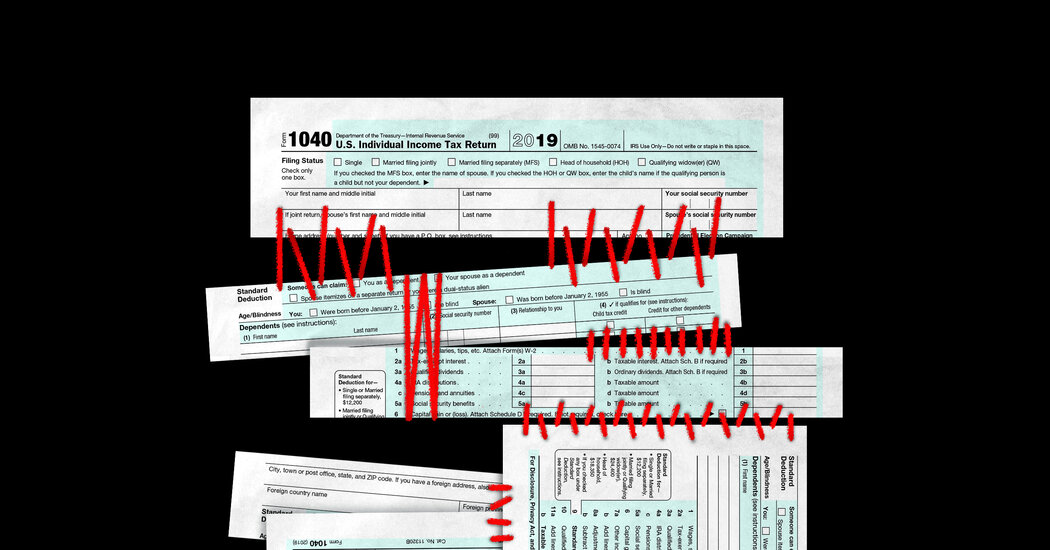 In the years before he became president, Donald Trump lived lavishly while paying little in federal income taxes. The Times reported on Sunday that Mr. Trump paid no taxes in 10 of the 15 years immediately preceding his run for the White House. In each of the following two years, 2016 and 2017, he paid the token sum of $750.

Remove Mr. Trump’s current job from the picture, and what remains is a story that still demands attention. The portrait of a man who earned hundreds of millions of dollars, lived a life of comic excess and yet, in many years, paid nothing in federal income taxes is an indictment of the federal income tax system. It illustrates the profound inequities of the tax code and the shambolic state of enforcement.

The government has sharply reduced the share of income that it collects in taxes from the wealthiest Americans. One recent study found that the 400 wealthiest households paid 70 percent of their total income in federal, state and local taxes in 1950, 47 percent in 1980 and 23 percent in 2018. The cuts in tax rates have come mostly at the federal level.

The government allows income to be sheltered from taxation for hundreds of different reasons, but real estate investors have long enjoyed a particularly sweet set of loopholes. A homeowner can write off the interest payments on a mortgage loan, but the owners of commercial buildings get a host of other benefits, too. It’s relatively easy for real estate investors to use past losses to offset income, to defer income and to avoid reporting some kinds of income. Best of all, the law lets investors claim a building is depreciating in value — a theoretical loss of money — even as the actual value increases.

“I love depreciation,” Mr. Trump said during the 2016 campaign.

Moreover, the formidable complexity of the tax code makes it difficult to tell when wealthy taxpayers have crossed legal lines. For the rich, taxation often becomes a kind of structured negotiation between the taxpayer’s experts and the government’s experts.

It’s not a fair fight: The rich keep getting richer, while the Internal Revenue Service keeps getting smaller. Republicans in Congress have slashed funding for the I.R.S., stripping the agency of expertise, resources and authority. The number of I.R.S. auditors has fallen by one-third since 2010. The government employs fewer people to chase deadbeats than at any time since the 1950s.

The share of all tax returns subject to an audit declined by 46 percent from 2010 to 2018, according to the Congressional Budget Office. Astonishingly, the decline was even steeper for millionaires — the audit rate fell 61 percent over the same period.

Legend has it that the bank robber Willie Sutton said that he robbed banks because that’s where the money is. The I.R.S. has been reduced to going where the money isn’t. As ProPublica has reported, the government now audits lower-income households that claim the earned-income tax credit at roughly the same frequency as high-income households. It’s easier for the depleted agency to pick on people who can’t afford to hire expensive tax attorneys.

The result? On current trends, the federal government will fail to collect $7.5 trillion in taxes over the next decade — about 15 percent of the total amount owed.

Cracking down on rich tax cheats is law enforcement. It is a basic function of government to ensure that people are playing by the rules. Tax cheating is not a victimless crime. Every dollar hidden from the government is that much less money to spend on education, roads and research. The rich are benefiting at the expense of everyone else.

It would be relatively easy to start collecting some of that money. The Congressional Budget Office estimated in July that adding $40 billion to the I.R.S. budget over the next decade would yield $103 billion in otherwise uncollected federal income taxes.

The methodology of that estimate is extremely conservative, as Natasha Sarin, an assistant law professor at the University of Pennsylvania, and Lawrence Summers, an economics professor at Harvard, noted in a July paper. Dr. Sarin and Dr. Summers estimated that fully restoring I.R.S. funding, and modernizing collection techniques, would allow the government to collect $1 trillion of the unpaid taxes.

Strict enforcement should start with the president, to show that no American is above the law.

Mr. Trump claimed a tax refund of $72.9 million in 2010, according to the Times report; the government paid the claim, and then opened an investigation. If Mr. Trump loses, he could owe the government more than $100 million in repayment, interest and penalties. It should not take federal authorities more than a decade to determine whether Mr. Trump has paid the full amount he owes. The government must move urgently to resolve this question.

On Tuesday night, when Mr. Trump and his Democratic opponent, Joe Biden, take the stage for their first presidential debate, both men should be asked what steps they will take to ensure that all Americans pay the full amount they owe.

And Congress should restore every penny of funding stripped from the I.R.S. since 2010 — plus whatever is necessary for the agency to perform its critical work.

Paying taxes is a civic duty, and the government needs the money. Most Americans try to pay what they owe, even if they wish they owed less, and they take comfort in the assumption that most of their neighbors are conducting themselves in the same way.

Americans deserve to know that the president has paid his taxes, too.