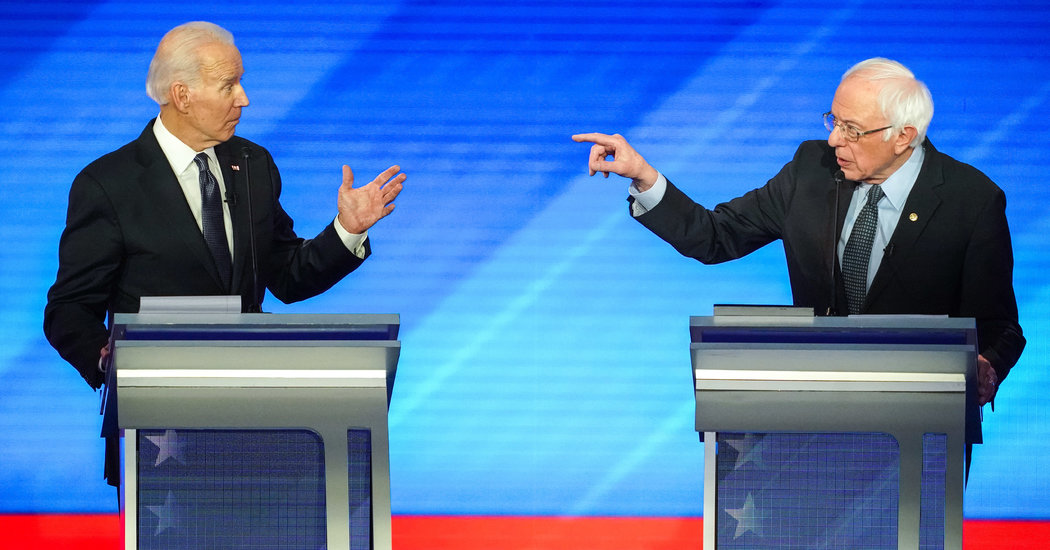 So sorry, Democratic millennials. You’ve got to drop the idea that baby boomers control everything. When it comes to the Democratic presidential nomination, the finalists are too old to qualify.

Bernie Sanders, 78, and Joe Biden, 77, were both born during World War II. Is that a problem? I’ve always had a theory that as people get older, if they’re lucky, they get better and better at a more limited set of skills. (I use this argument frequently when the issue of my inability to keep computer passwords straight comes up.)

If it’s true, we’d really have an argument for Biden, who has endless experience working with Congress and dealing with foreign leaders. Sanders, on the other hand, is very, very, very good at giving his one basic speech. I believe he could deliver it while being swung from a crane over the Statue of Liberty.

Whoever wins, of course, will run against Donald Trump, 73, who has never made any attempt to actually learn how to run a country but has super-perfected his genius for bragging and insulting people on television

Trump is already making a big deal about Biden’s tendency to garble his words when he’s talking in public. “WATCH: Joe Biden confuses his wife with his sister,” tweeted the president’s campaign.

That was when Biden was making introductions during his victory speech Tuesday, and it was actually sort of funny. (“Ah, you switched on me!”) But I hope the Democrats are stockpiling video for the final campaign of, say, Trump’s speech at the Lincoln Memorial praising America’s revolutionary army for the time it “rammed the ramparts” and “took over the airports.”

Or the time he told a crowd “the kidney has a very special place in the heart.” Or the time he called his wife “Melanie” in a tweet. Or the time he demanded the media look into the “oranges” of the Mueller investigation. Or the time he referred to the midterm elections as the “midtown and midturn.” Or . …

We could go on and on. And you know, before November I bet we will.

Super Tuesday ruined the presidential hopes of Mike Bloomberg, 78, who bowed out with an endorsement of Biden. “I’ve always believed that data should inform our decisions,” Bloomberg said in what was nevertheless a very emotional address for him.

Well, money won’t buy you everything. But it will certainly make Bloomberg a venerated Biden supporter. He’ll be fine. Most of us would never get over having spent $600 million to win the delegates from American Samoa. But financially for Bloomberg, that’s pretty much like blowing $10 on a bad cheeseburger.

Elizabeth Warren, 70, was the youngest serious candidate in the Super Tuesday battle, and it certainly wasn’t any help. Coming in third in her home state was a terrible way to end a campaign. But when Americans in the future look back on her career, they’ll remember Warren as one of the pioneers who, like Hillary Clinton, helped to get the nation used to the idea that there’s nothing unusual about voting for a woman to be president.

Either Biden or Sanders, if elected, would be the oldest American entering a first presidential term. As of right now the record is held by Trump, who was 70, followed by Ronald Reagan, who was 69. Reagan went on to a second term that many people felt was marred by a certain … mental slippage. It’s sort of hard to tell whether Trump is failing in that way since he was so awful when he started out.

Well, we’ve had plenty of presidents who seemed to go off the rails in the prime of life. And these days an average man of 77 has about a 10-year life expectancy. That goes up if he doesn’t smoke or drink. And I’ll bet it really skyrockets if he has the entire staff of Walter Reed hospital at his beck and call.

The first time age was a big issue in a presidential election was back in 1840. William Henry Harrison, the Whig candidate, was 67 and his opponents referred to him as “a living mass of ruined matter.”

Harrison promptly released a doctor’s report: “vivacity and almost youthfulness of feelings. … Bodily vigor as good as that of most men his age. Subject to no disease but periodic headache.” For its time, it was probably more thorough than the one we got from Bernie Sanders.

Then, of course, Harrison got elected, went to Washington, and died a month after the inauguration. The only lesson the nation should derive from that story is that it’s a bad idea to give an extremely long inaugural speech in inclement weather.

Trump, who revels in his ability to attach insulting adjectives to people’s names, calls Sanders “Crazy Bernie.” That’s a tad ironic coming from a man who has been driving the nation nuts for more than three years.

The president calls Biden “Sleepy Joe,” which is maybe an age-related insult. But from Biden’s point of view, it’s not bad at all. Right now there’s nothing the nation would welcome more than a president whose worst flaw is making everybody feel like taking a nap.

We could so use some downtime.