March 16 was the last day David Engelsman walked into the Jackrabbit, an acclaimed restaurant at the boutique Duniway Hotel in downtown Portland, Ore. The lead server on morning duty, Mr. Engelsman was told before his shift started that his job was no longer needed. He left early, at 10:30 a.m. The restaurant didn’t reopen the next day.

A total of 330 workers at the Duniway and another Hilton property across the street have been let go since then. With two autistic children, a wife with a severe heart condition and now no health insurance, Mr. Engelsman has devoted much of his time to the fight by his union, UNITE HERE, to get Hilton to make health-plan contributions for laid-off workers until the end of the year. “We’re left standing here with nothing,” he said. “I know I sound dramatic, but it is dramatic.”

With 11.5 million jobs lost since February and the government’s monthly report Friday showing a slowdown in hiring, stories like this have become painfully common. When companies dispatched office staff to work remotely from home, cut business trips and canceled business lunches, they also eliminated the jobs cleaning their offices and hotel rooms, driving them around town and serving them meals.

For this army of service workers across urban America, the pandemic risks becoming more than a short-term economic shock. If white-collar America doesn’t return to the office, service workers will be left with nobody to serve.

The worry is particularly acute in cities, which for decades have sustained tens of millions of jobs for workers without a college education. Now remote work is adding to other pressures that have stunted opportunities. The collapse of retailers like J.C. Penney and Neiman Marcus has wiped out many low-wage jobs. The implosion of tourism in cities like New York and San Francisco will end many more.

Maria Valdez, a laid-off housekeeper at the Grand Hyatt in San Antonio, is scraping by with three children on a $314 weekly unemployment check. Kimber Adams, who lost her job as a bartender at the Seattle-Tacoma International Airport, is pinning hopes on her “Plan B” to become a phlebotomist. Waldo Cabrera, let go from his job cleaning the cabins of American Airlines jets at the Miami airport, hopes an offer to drive a tanker truck in Texas will wait until he can move at the end of the year. “Perforce I have to leave here,” he said.

Mari Duncan is relatively lucky. She is still drawing a paycheck, even though her job marinating meats and cooking soup at Facebook’s Seattle campus ended when Facebook sent its managers and engineers to work from home. But she fears that her deal — Facebook is still paying its food service contractor so it can cover payroll — can’t last forever. “When I saw a story break about how Facebook will stay remote until July of 2021,” she said, “I freaked out a little bit.”

Every one of them is itching to get back to work. But a fear is budding that even when the pandemic has passed, the economy may not provide the jobs it once did.

“Some law firms are finding that it is more productive for their lawyers to stay at home,” said Kristinia Bellamy, a janitor who was laid off from her job cleaning offices at a high-rise housing legal firms and other white-collar businesses in Midtown Manhattan. “This might be the beginning of the end for these commercial office buildings.”

Consider Nike’s decision in the spring to allow most employees at its headquarters in the Portland area to work remotely. Aramark, which runs the cafeteria and catering at Nike, furloughed many of its workers. With no need for full services anticipated “for an undefined period,” Aramark says, 378 employees — waiters, cooks, cashiers and others — now face permanent layoff on Sept. 25.

The question is whether dislocations like this will be only temporary. About one-fifth of adults of working age who do not have a college degree live in the biggest metropolitan areas — in the top quarter by population density — according to estimates by David Autor of the Massachusetts Institute of Technology. Most are in service industries that cater to the needs of an affluent class of “knowledge workers” who have flocked to cities in search of cool amenities and high pay.

And having discovered Zoom, what company will fly a manager across the country for a day’s worth of meetings? A lasting reduction in business travel will endanger the ecosystem of hotel and restaurant workers serving corporate travelers.

Jonathan Dingel and Brent Neiman of the University of Chicago have calculated that 37 percent of jobs can be done entirely from home. Those jobs tend to be highly paid, in fields like legal services, computer programming and financial services. And they tend to concentrate in affluent areas like San Francisco; Stamford, Conn.; and Raleigh, N.C.

Recent research by the economists Edward Glaeser, Caitlin Gorback and Stephen Redding found that when Covid-19 struck, activity — measured by the movement of cellphones in and out of ZIP codes — declined much more sharply in neighborhoods where a larger share of residents had jobs that could potentially be done from home.

The economists at Opportunity Insights in Cambridge, Mass., estimate that in the year to Aug. 9, consumer spending in high-income ZIP codes declined 8.4 percent, with the impact felt disproportionately by industries that rely heavily on the nation’s low-wage labor force: restaurants and hotels, entertainment and recreation services.

Ability to work from home in metropolitan areas

compared to change in jobs there

Share of jobs that can be done from home 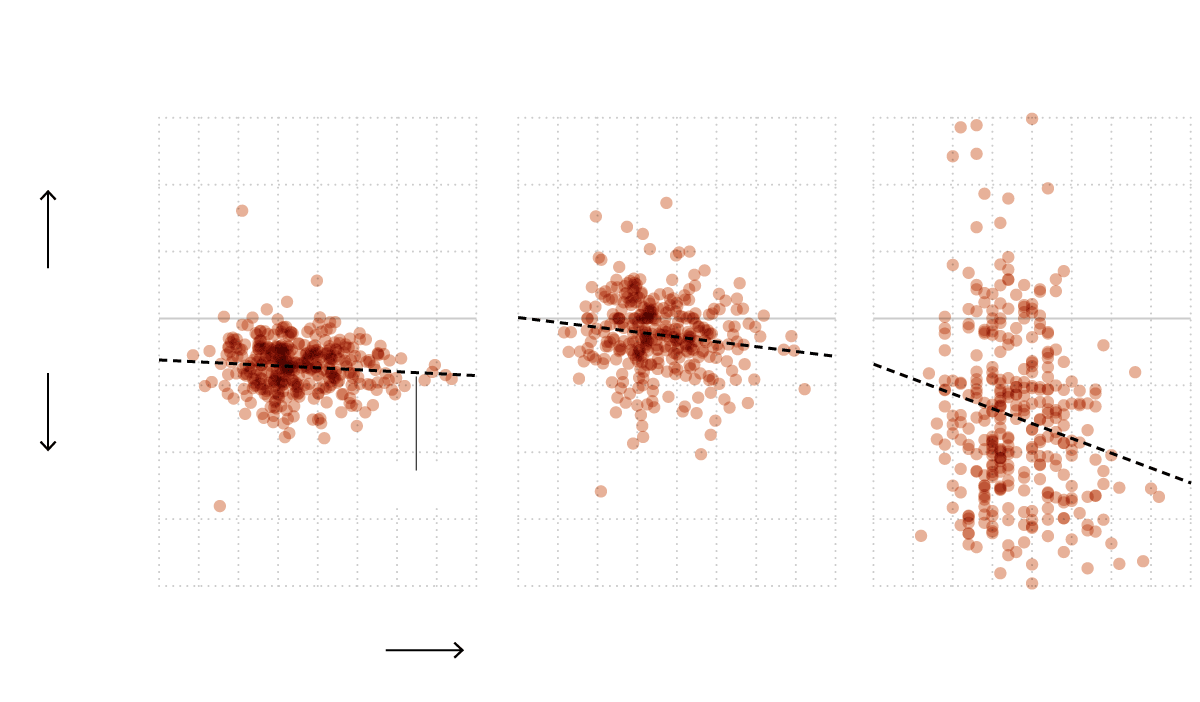 be done from home

be done from home

A lasting change in the behavior of the high-wage layer atop urban labor markets would have an outsize effect. Many service jobs that held on in the face of globalization and widespread automation may not survive.

“I don’t know what a less-skilled worker does in West Virginia,” said Mr. Glaeser, an urban economist at Harvard University. “If urban service jobs disappear, the whole of America becomes like West Virginia.”

Nike isn’t Portland’s biggest private employer. That’s Intel, the semiconductor giant, which employs 20,000 mostly well-paid people there. It is a pillar of a high-tech cluster known as the Silicon Forest stretching between Hillsboro and Beaverton on the western edge of the city. And it supports a network of contractors and subcontractors whose income trickles down through the area’s economy.

Only about 40 percent of Intel’s employees are working on site — those indispensable to its vast chip-making plants — and remote work is set to continue until at least next June. Even after that, said Darcy Ortiz, Intel’s vice president for corporate services, “there will be more flexibility in the way we work.”

For businesses that rely on Intel’s footprint, that may not be great news. “Intel has sustained us,” said Rick Van Beveren, a member of the Hillsboro City Council who owns a cafe and a catering business that remain mostly shuttered. “We cater to a constellation of businesses around Intel.”

The same type of decision is being made around the country. Scott Rechler, chief executive of RXR Realty, which owns over 20 million square feet of office space in New York City, estimates that every office worker sustains five service jobs, from the shoeshine booth to the coffee shop. Yet only about 12 percent of his tenants are in the office.

Restaurant Associates — the food-service conglomerate operating cafeterias at companies including Google and The New York Times, and restaurants at the Smithsonian and the Quadrangle Club of the University of Chicago — employed 10,500 workers before the pandemic. Though the company has been scrambling for new business since then — to feed health workers, or to make home-delivered meals — Dick Cattani, the chief executive, said that only some half of them are working today.

Of course, a lot of the urban economy that employs low-wage service workers was shut down by city and state governments hoping to contain the pandemic. The risk of infection is also keeping many people at home. Presumably these fears and restrictions will relax once a vaccine or a treatment for Covid-19 is developed.

In New York, for instance, Amazon, Facebook and Google expect to add thousands more workers in the city. “It will take time to recover,” Mr. Rechler said. “Many small businesses may not survive. There will be some urban flight. But that will be backfilled by the next young bright cohort of people who want to come to New York.”

Mr. Cattani sees this as an opportunity to buy new businesses. And the company is expanding into hospitals, to feed patients and their visitors. “Covid can’t change the underlying energy of creative workers in a single place,” said John Alschuler, chairman of the real estate advisory firm HR&A Advisors.

A large share of the American labor force hopes he is right. Mr. Engelsman, the restaurant server in Portland, has no idea how he will pay for his wife’s medication when a month’s dose of beta blockers alone costs $580. Mr. Cabrera, the American Airlines cabin cleaner in Miami, had to dip into the insurance money he got after somebody crashed into his car, and is now carless. Ms. Valdez, the hotel housekeeper in San Antonio, was called back for the Grand Hyatt’s reopening this month, but says she can’t return until school starts because she must care for her 11-year-old son. She worries that Hyatt will try to make do with fewer cleaning workers and not hire everybody back.

Angel Carter, who was laid off in March from her job cleaning three floors in Philadelphia’s Center City, notes that janitors at work are putting their health at risk. They are more important than ever — given the pandemic — because offices must be cleaned extra thoroughly. She argues that the job these days merits hazard pay. But above anything else, Ms. Carter said, “I’m praying that they do open back up.”