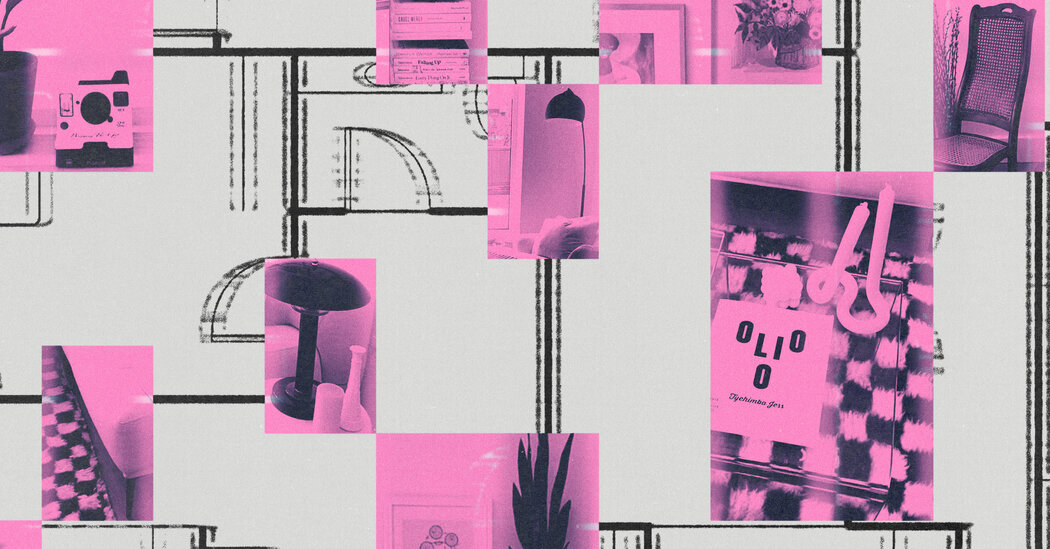 TikTok has developed its own approach to home-design content: Skip over the home to obsess over the objects inside.

The apartment appears in flashes as a song by Frank Ocean plays. We see a white couch with throw pillows: white squares, pink square, ocher orb, black square. Later come quick cuts: to a standing bookshelf (white spines only), to the throw pillows again, to a transparent coffee table (an opportunity, really, to show off the checked rug beneath). We see a pet dog on bedspread, a side table, a TV stand, the couch again, a dining area with Thonet-style chairs. Among these curated images is a shelf of curated objects, centered on a Polaroid camera. Then come the bedroom, the bar cart, the white Smeg toaster. It all goes by before we can absorb it, but we aren’t meant to absorb it — only to have impressions.

This is a typical post on what I’ve come to think of as Shelter TikTok, a 2021 spin on the design and architecture magazines of the 20th century. On Shelter Tok, you don’t move through a space so much as lurch through it, gravitating from item to item. Mainstays of the genre include zoomed-in footage of carefully placed objects and a lack of interest in negative space. On TikTok, everything flashes by; why should homes be any different?

In another video, we watch a tattooed hand turn a gold lighting dial before panning across an upholstered headboard. From there we cut to the ceiling, where a wooden pendant light hangs from white molding amid undulating zebra stripes. The camera spins away to the floor, where we see that the headboard isn’t for a bed; it supports a row of orange cushions. Nearby is an emerald rug with an orange border and a stylized image of a cheetah at its center. We see a gilt-framed smiley face. A projection screen that rolls up to reveal a mirror above a white brick fireplace. Hanging plants. An alcove full of windows. We’re back to the hand on the dial; the video loops.

There are people who will study these TikToks carefully, as I have. They will pause in each room to note details that can be collected on their Pinterest boards, if not in their own homes. They want to know where the couch is from, the rug, the bookshelf. “This is my style exactly!” says one commenter on that first video, perhaps happy to find a new way of identifying herself. “What would you call this?”

The first known use of the term “shelter magazine” appeared in The New York Times in 1946, when the paper reported that Jerome J. Brookman had been named advertising manager of Your Own Home, a “shelter magazine devoted to low-cost housing.” Brookman was a World War II veteran, and his return home coincided with a housing boom, as 2.4 million other veterans received government-backed loans to put toward their (often suburban) American dreams. It was during this period that tastemakers like Elizabeth Gordon, who edited House Beautiful for 23 years, made the shelter category a blueprint for living. In 1960, Gordon’s two-issue series on the Japanese concept of shibui was so popular that the set resold for as much as $12 — the equivalent of more than $110 today. When I visited Gordon’s archives at the Smithsonian in 2017, I found them filled with letters of praise for the Japanese design issues. One woman wrote that “Not since the doctor said: ‘It’s a BOY!’ have I been so excited”; her husband was so taken that he built a terrace and windbreak inspired by the designs in the magazine.

He could do this because, along with photographs, the leading shelter magazines — House Beautiful, Better Homes and Gardens, House & Garden — came with floor plans and building instructions. They even had competing model-home programs. Shelter meant approaching the structural aspects of the home as something the occupant had control over: the sources of light, the interior climate, the ceiling height, the landscaping.

It is hard to pull off monastic minimalism when you have a popcorn ceiling.

On Shelter Tok, such control is a thing of the past. A majority of American TikTok users are below the age of 29, a group that includes young millennials (only 37 percent of whom will own a home by age 34), Gen Z (age 24 at most) and others too young to even think about building a windbreak. According to Bloomberg, 18 percent of millennial renters have no plans to ever stop renting; many will continue living in the kinds of situations where you can barely get permission to repaint. Some Shelter Tok videos might result from actual renovations — fixtures, appliances, ​wallpaper — but the audience is there to identify with the taste displayed, not implement it.

Where function isn’t negotiable, form thrives. Much like a teenager’s bedroom, Shelter Tok is about masking a lack of control with personal objects and good vibes. This isn’t just a far cry from the old shelter magazines; it’s even a far cry from the videos on other social media platforms. YouTube, for instance — a platform with copious D.I.Y. renovation content — is also home to Architectural Digest’s celebrity series “Open Door,” in which the viewer is greeted at the entrance of the subject’s house and led in to experience the actual flow of the space. Shelter Tok has no such formality.

Last year, a popular TikTok video introduction was some version of “Objects in my house/apartment/bedroom that just make sense.” This is the modern version of knocking down a wall to open up a room: making sense of your identity within the home. Recently, one conversation-starting variant showed the perils of being a young renter with distinctive taste. “Things that I think make my home unique,” its creator begins. We’re shown a tatami mat on the floor and short stacks of books, instead of shelving. There is a Rei Kawakubo chair, but it’s used for sweaters, not for sitting. Decorations are sparse but include a black single-stem vase, a purse hanging from a cup hook on the ceiling and a closed garment bag.

These objects were presented with a straight face, but some wondered whether they might be a joke. A friend pointed out to me that it is hard to pull off Rick Owens-style monastic minimalism when you have a popcorn ceiling. For me, a bigger issue was the inconveniently located electrical outlets, which reminded me of all the ugly places I lived in my 20s because they were the best among bad options. Then again, that Rei Kawakubo chair, which has sold for over $7,000, is still cheaper than a mortgage.

Last year, after an appearance in Architectural Digest’s “Open Door” series, Dakota Johnson’s green kitchen went viral, with special attention paid to the bowls of limes artfully placed on the counters. Johnson later admitted that she is mildly allergic to limes; the bowls were just set dressing, objects arranged to make an impression. I learned this information from, you guessed it, TikTok — where the platform itself is the architecture, and we shuffle from room to room in our slippers, touring an algorithm.