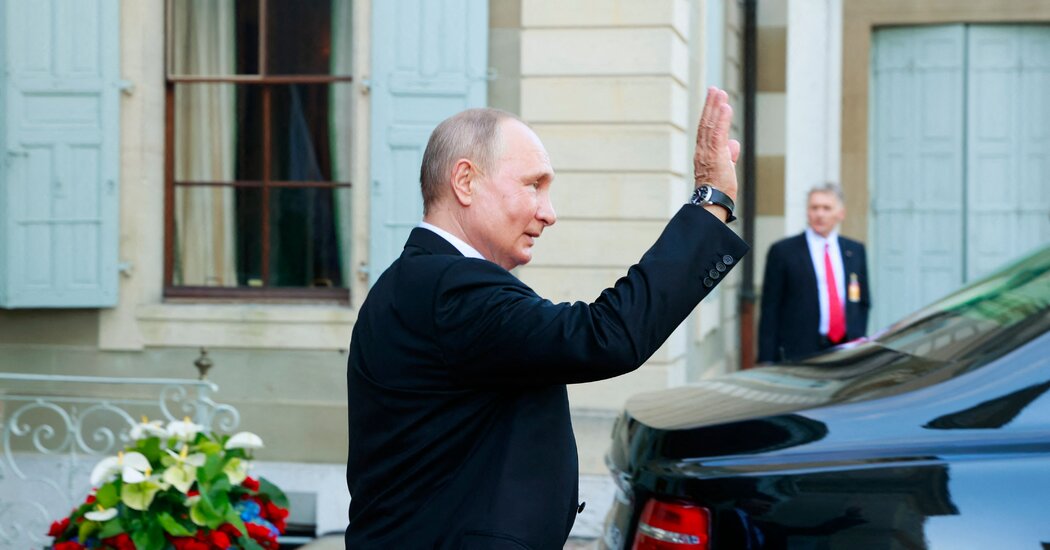 Last August, I predicted that Donald Trump’s electoral defeat would encourage a lot of Republican politicians to embrace Don Draper’s mantra from “Mad Men,” his explanation of how easy it is to bury an inconvenient piece of your own past: “This never happened. It will shock you how much it never happened.”

You can definitely see the Draper method at work in the let’s-just-not-talk-about-Trump wing of the G.O.P. these days. But what’s equally striking are the ways that liberals are practitioners as well. This week, for instance, Joe Biden held a summit with Vladimir Putin — a banal event in the context of past Democratic administrations, but a remarkable one in the context of the world as the liberal Resistance interpreted it from 2016 through 2020.

In that world, Putin was a figure of extraordinary menace, the leader of an authoritarian renaissance whose tentacles extended everywhere, from Brexit to the N.R.A. He had hacked American democracy, placed a Manchurian candidate in the White House, sowed the internet with misinformation, placed bounties on our soldiers in Afghanistan, extended Russian power across the Middle East and threatened Eastern Europe with invasion or subversion. In this atmosphere every rumor about Russian perfidy was pre-emptively believed, and the defense of liberal democracy required recognizing that we had been thrust into Cold War 2.0.

Now comes Biden, making moves in Russia policy that are essentially conciliatory — freezing a military aid package to Ukraine, ending U.S. sanctions on the Nord Stream 2 pipeline linking Germany to Russia, a return of ambassadors — and setting up a summit that can reasonably be regarded as a modest propaganda coup for Putin. And suddenly almost everyone wants to act as though the Trump years never happened: Not just the Republicans accusing Biden of being soft on Moscow, but the Democrats who have apparently decided that it’s fine to hand concessions and photo ops and promises of “stability” to the regime that just yesterday was the Great Reactionary Enemy, the liberal order’s greatest threat.

But this isn’t actually a column about liberal amnesia or hypocrisy. It’s a column about the wisdom of the Biden administration, in recognizing that certain Trump-era hysterias within its party can be safely put to sleep.

Some of those hysterias belong to the progressive left, and plenty has been written about Biden’s refusal to let woke Twitter set all his political priorities. But the Russia hysteria was a paranoia of the center, an establishment overreaction, so it’s notable to see Biden and his team steer away from it as well.

In this case, what the White House seems to grasp is that pieces of Trumpist foreign policy are worth preserving: not the dodgy business ties (well, depending on where Hunter Biden resurfaces) and the weird man-crushes on dictators, but the general idea of a U.S. foreign policy reoriented away from Europe and the Middle East and reorganized to contain the threat of China, with late-1990s fantasies about the inexorable expansion of the liberal order left behind.

This reorientation does not require friendship with Putin, which would be morally undesirable and strategically unlikely. But it requires treating Russia policy primarily as the management of a weak and therefore mischief-making competitor, rather than a grand crusade against a number-one geopolitical adversary. Hence the summit and its talk of “strategic stability,” hence the conciliatory moves that if Trump had made them would have headlined every hour on MSNBC.

Notably, Biden can get away with this — meaning his stiff-arms to the center-left Resistance as well as the woke left — not just because of the power of Draper-ish partisan amnesia, but because his core support within the Democratic Party didn’t belong to either of the groups he’s stiff-arming.

In his new book, “Last Best Hope: America in Crisis and Renewal,” George Packer portrays an American liberalism divided between two competing tribes, each blinkered in their way — what Packer calls “Smart America,” which is basically meritocratic elites, and “Just America,” which is basically the younger activist left. But as New York magazine’s Eric Levitz pointed out in a response to Packer, the Biden presidency was made possible by Democratic voters who don’t belong to either group: blue-collar whites, culturally conservative African-Americans, less-educated and religious voters.

This base gives Bidenism a genuine opportunity for Democrats to escape from Packer’s binary — from the “smart” liberalism that wanted to blame all its own failures on Russian disinformation and the “just” liberalism that thinks justice lies in making sure everyone says “Latinx” and “birthing people.”

But Biden is old and his constituencies aren’t powerful among the party’s young cadres and future elites, where Packer’s groups predominate. (There’s a reason language like “birthing people” creeps into administration documents.) So for liberalism’s longer run, it isn’t enough for this president to eschew the mix of wokeness and Russophobia that became his party’s organizing theories in the Trump era. He would need to establish Bidenism as something coherent in its own right, with its own young adherents and consistent theory of the world.

Otherwise the opportunity will fade, the suppression will weaken, and the hysteria that’s been opportunistically forgotten will probably return.