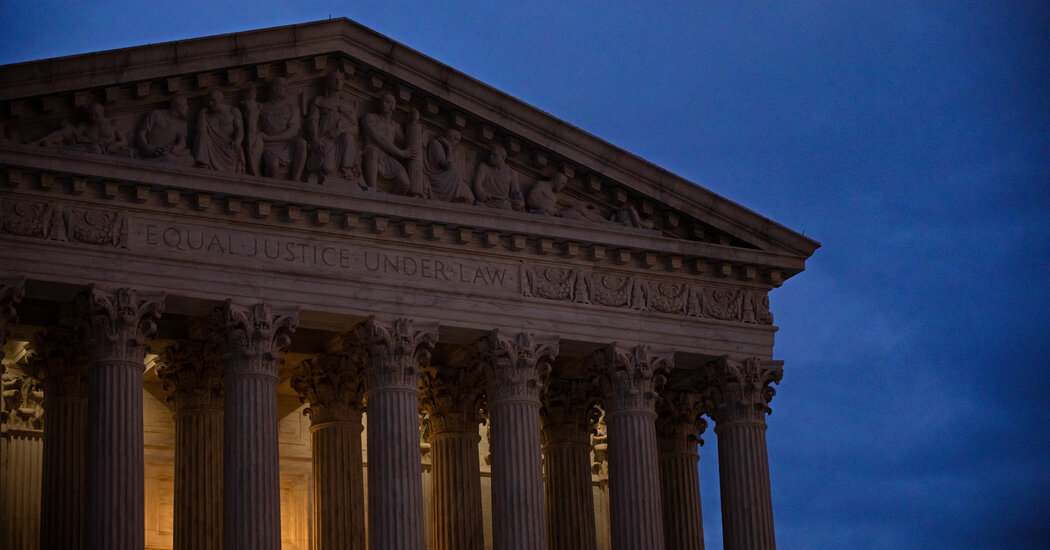 The justices are defying their procedural rules to rewrite the Constitution.

Late last Friday, the Supreme Court, by a 5-4 vote, issued an emergency injunction blocking California’s Covid-based restrictions on in-home gatherings on the ground that, insofar as they interfere with religious practice, they violate the First Amendment’s free exercise clause.

Reasonable minds will disagree on this new standard for free exercise claims. But a far more glaring problem with the court’s decision is that it wasn’t an appropriate moment to reach it.

Like so many of the justices’ more controversial rulings in the last few years, this one came on the court’s “shadow docket,” and in a context in which the Supreme Court’s own rules supposedly limit relief to cases in which the law is “indisputably clear.”

Whatever else might be said about it, this case, Tandon v. Newsom, didn’t meet that standard. Instead, the justices upended their own First Amendment jurisprudence in the religion sphere, making new law in a way their precedents at least used to say they couldn’t.

The University of Chicago law professor Will Baude coined the term “shadow docket” in 2015 to describe that part of the justices’ workload that is resolved through summary orders, rather than lengthy opinions after multiple rounds of briefing and oral argument. Like all courts, the Supreme Court has always had what’s known as an orders list that is mostly used for anodyne case management issues.

But recent years have seen a significant uptick in the volume of “shadow docket” rulings that are resolving matters beyond those issues, especially orders changing the effect of lower-court rulings while they are appealed. Indeed, Friday night’s injunction was at least the 20th time since the court’s term began last October that the justices have issued a shadow docket ruling altering the status quo. And the more substantive work that the justices carry out through such (usually) unsigned and unexplained orders, the more the “shadow docket” raises concerns about the transparency of the court’s decision making, if not the underlying legitimacy of its decisions.

At issue in Friday’s case was California’s Covid-based restrictions on in-home gatherings to members of no more than three different households. The plaintiffs, who regularly hold Bible studies and prayer meetings in their homes, challenged the restrictions on the ground that they interfered with their right to the free exercise of religion as guaranteed by the First Amendment.

The trial court sided with California, relying on Supreme Court cases holding that secular laws of general applicability are not constitutionally suspect merely because they impose burdens on religious exercise. After the court of appeals refused to block California from enforcing those restrictions while the plaintiffs appealed, the Supreme Court stepped in Friday night to do exactly that.

In a short, unsigned opinion “for the court,” the majority expressly adopted what has been described by scholars as the “most favored nation” view of the free exercise clause. Under this approach, otherwise neutral laws that might incidentally burden religious exercise (like zoning laws or public health regulations, for instance) are constitutionally suspect if they create any exceptions for what judges deem to be “comparable” secular activities.

Because California allowed some secular businesses to bring together more than three families at a time, such a limit on in-home gatherings for any purpose, including religious ones, was therefore impermissible. But whatever else might be said about the “most favored nation” argument, no prior majority opinion had ever adopted it. Instead, in what one scholar called the court’s “most important free exercise decision since 1990,” the justices used the shadow docket to expand religious liberty.

This trend of using the shadow docket for substantive jurisprudence first surfaced most visibly in cases involving the Trump administration — in which the Justice Department repeatedly asked the Supreme Court to pause an adverse lower-court ruling while the government challenged the decision on appeal. All told, the Trump administration sought emergency relief pending appeal 41 times in four years; in contrast, the Bush and Obama administrations together sought such relief eight times in 16 years. And the justices largely acquiesced to the Trump applications, granting 28 in full or in part.

But whereas virtually all of the Trump cases involved “stays” pending appeal, where a lower court had already ruled against the government, the California ruling involved a far more aggressive form of emergency relief — where a party challenging a government policy that lost in the lower courts seeks to have the policy frozen pending appeal.

For decades, the Supreme Court has insisted that these emergency injunctions should be far rarer than stays. Summarizing the precedents, Justice Antonin Scalia explained in 1986 that such relief should be granted “sparingly and only in the most critical and exigent circumstances, and only where the legal rights at issue are indisputably clear.” It ought to follow that newly minted rights, such as the one the court articulated on Friday, are not “indisputably clear.”

This is not just a technical point; it goes directly to the Supreme Court’s constitutionally mandated (and self-described) role in our constitutional system. As Justice Scalia put it, unlike a stay, which is a short-term order delaying a proceeding, an injunction “does not simply suspend judicial alteration of the status quo but grants judicial intervention that has been withheld by lower courts.”

To provide relief in such a case where the right to relief is not clear is to effectively allow the Supreme Court to go first, ahead of the lower courts — never mind that, as the justices have repeatedly said in the past, “ours is a court of review, not first view,” and that their “primary responsibility” is “as an appellate tribunal.” Using emergency orders pending appeal to change substantive law turns those principles on their heads and arguably exceeds the justices’ statutory authority to issue such relief.

All of this would be problematic enough if the California decision was an outlier. But it wasn’t. Rather, the ruling was the seventh time since October that the justices have issued an emergency injunction — all of which have blocked Covid restrictions in blue states on religious exercise grounds.

Before these rulings, the court had gone five years without issuing a single injunction pending appeal. Of course, such an extraordinary trend might still be justified if these states were openly defying settled legal precedents.

But as Justice Elena Kagan pointed out in her opinion dissenting from Friday night’s order, the majority was able to rely only on “separate opinions and unreasoned orders” to support its analysis. Until this term, it would have been unheard-of to articulate a new constitutional rule while issuing an emergency injunction to enforce it.

Because of Professor Baude and others, the Supreme Court’s “shadow docket” is receiving far more attention from the court’s practitioners, journalists and academic observers. The House Judiciary Committee even held a hearing on the topic in February.

But what this latest ruling drives home is that this is more than just an interesting phenomenon; it is a pernicious one. A majority of the justices are increasingly using procedural tools meant to help them control their docket to make significant substantive changes in the law, in defiance not only of their own standards for such relief, but of fundamental principles of judicial decision making.

Whatever other topics President Biden’s much-ballyhooed commission on Supreme Court reform intends to study, the growing use — and abuse — of the shadow docket ought to be high on its list.

Stephen I. Vladeck is a professor at the University of Texas School of Law, where he teaches courses on the federal courts and constitutional law. He also co-hosts a podcast on national security law.