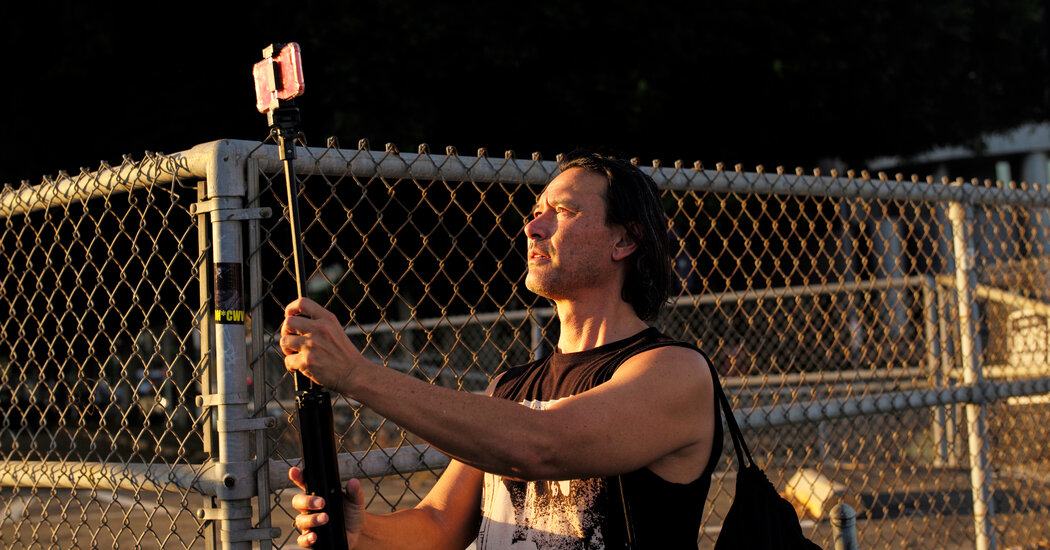 On the last Sunday in May, Jeremy Lee Quinn, a furloughed photographer in Santa Monica, Calif., was snapping photos of suburban moms kneeling at a Black Lives Matter protest when a friend alerted him to a more dramatic subject: looting at a shoe store about a mile away.

He arrived to find young people pouring out of the store, shoeboxes under their arms. But there was something odd about the scene. A group of men, dressed entirely in black, milled around nearby, like supervisors. One wore a creepy rubber Halloween mask.

The next day, Mr. Quinn took pictures of another store being looted. Again, he noticed something strange. A white man, clad in black, had broken the window with a crowbar, but walked away without taking a thing.

Mr. Quinn began studying footage of looting from around the country and saw the same black outfits and, in some cases, the same masks. He decided to go to a protest dressed like that himself, to figure out what was really going on. He expected to find white supremacists who wanted to help re-elect President Trump by stoking fear of Black people. What he discovered instead were true believers in “insurrectionary anarchism.”

To better understand them, Mr. Quinn, a 40-something theater student who worked at Univision until the pandemic, has spent the past four months marching with “black bloc” anarchists in half a dozen cities across the country, chronicling the experience on his website, Public Report.

He says he respects the idealistic goal of a hierarchy-free society that anarchists embrace, but grew increasingly uncomfortable with the tactics used by some anarchists, which he feared would set off a backlash that could help get President Trump re-elected. In Portland, Ore., he marched with people who shot fireworks at the federal court building. In Washington, he marched with protesters who harassed diners.

Mr. Quinn discovered a thorny truth about the mayhem that unfolded in the wake of the police killing of George Floyd, an unarmed Black man in Minneapolis. It wasn’t mayhem at all.

While talking heads on television routinely described it as a spontaneous eruption of anger at racial injustice, it was strategically planned, facilitated and advertised on social media by anarchists who believed that their actions advanced the cause of racial justice. In some cities, they were a fringe element, quickly expelled by peaceful organizers. But in Washington, Portland and Seattle they have attracted a “cultlike energy,” Mr. Quinn told me.

Don’t take just Mr. Quinn’s word for it. Take the word of the anarchists themselves, who lay out the strategy in Crimethinc, an anarchist publication: Black-clad figures break windows, set fires, vandalize police cars, then melt back into the crowd of peaceful protesters. When the police respond by brutalizing innocent demonstrators with tear gas, rubber bullets and rough arrests, the public’s disdain for law enforcement grows. It’s Asymmetric Warfare 101.

An anarchist podcast called “The Ex-Worker” explains that while some anarchists believe in pacifist civil disobedience inspired by Mohandas Gandhi, others advocate using crimes like arson and shoplifting to wear down the capitalist system. According to “The Ex-Worker,” the term “insurrectionary anarchist” dates back at least to the Spanish Civil War and its aftermath, when opponents of the fascist leader Francisco Franco took “direct action” against his regime, including assassinating policemen and robbing banks.

If that is not enough to convince you that there’s a method to the madness, check out the new report by Rutgers researchers that documents the “systematic, online mobilization of violence that was planned, coordinated (in real time) and celebrated by explicitly violent anarcho-socialist networks that rode on the coattails of peaceful protest,” according to its co-author Pamela Paresky. She said some anarchist social media accounts had grown 300-fold since May, to hundreds of thousands of followers.

“The ability to continue to spread and to eventually bring more violence, including a violent insurgency, relies on the ability to hide in plain sight — to be confused with legitimate protests, and for media and the public to minimize the threat,” Dr. Paresky told me.

Her report will almost certainly catch the attention of conservative media and William Barr’s Department of Justice, which recently declared New York, Portland and Seattle “anarchist jurisdictions,” a widely mocked designation accompanied by the threat of withholding federal funds.

There’s an even thornier truth that few people seem to want to talk about: Anarchy got results.

Don’t get me wrong. My heart broke for the people in Minneapolis who lost buildings to arson and looting. Migizi, a Native American nonprofit in Minneapolis, raised more than $1 million to buy and renovate a place where Native American teenagers could learn about their culture — only to watch it go up in flames, alongside dozens of others, including a police station. It can take years to build a building — and only one night to burn it down.

And yet, I had to admit that the scale of destruction caught the media’s attention in a way that peaceful protests hadn’t. How many articles would I have written about a peaceful march? How many months would Mr. Quinn have spent investigating suburban moms kneeling? That’s on us.

While I feared that the looting and arson would derail the urgent demands for racial justice and bring condemnation, I was wrong, at least in the short term. Support for Black Lives Matter soared. Corporations opened their wallets. It was as if the nation rallied behind peaceful Black organizers after it saw the alternative, like whites who flocked to the Rev. Dr. Martin Luther King Jr. after they got a glimpse of Malcolm X.

But as the protests continue, support has flagged. The percentage of people who say they support the Black Lives Matter movement has dropped from 67 percent in June to 55 percent, according to a recent Pew poll.

“Insurrectionary anarchy” brings diminishing returns, especially as anarchists complicate life for those working within the system to halt police violence.

In Louisville, Ky., Attica Scott, a Black state representative who sponsored a police reform bill, was arrested last week and charged with felony rioting after someone threw a road flare inside a library.

In Portland, Jo Ann Hardesty, an activist turned city councilor, has pushed for the creation of a pilot program of unarmed street responders to handle mental illness and homelessness, a practical step to help protect populations that experience violence at the hands of police. Yet Ms. Hardesty is shouted down at protests by anarchists who want to abolish the police, not merely reform or defund them.

“As a Black woman who has been working on this for 30 years, to have young white activists who have just discovered that Black lives matter yelling at me that I’m not doing enough for Black people — it’s kind of ironic, is what it is,” Ms. Hardesty told me.

In Seattle, Andrè Taylor, a Black man who lost his brother to police violence in 2016, helped change state law that made it nearly impossible to prosecute officers for killing civilians. But he has been branded a “pig cop” by young anarchists because his nonprofit organization receives funds from the city, and because he cooperates with the police.

“When they say, ‘You are working with the police,’ I say, ‘I have worked with police and I will continue to work for reform,’” Mr. Taylor told me. “Remember, I lost a brother.”

Black people get shot for doing ordinary law-abiding things. They don’t have the luxury of anarchy, he told me.

That’s the thing about “insurrectionary anarchists.” They make fickle allies. If they help you get into power, they will try to oust you the following day, since power is what they are against. Many of them don’t even vote. They are experts at unraveling an old order but considerably less skilled at building a new one. That’s why, even after more than 100 days of protest in Portland, activists do not agree on a set of common policy goals.

Even some anarchists admit as much.

“We are not sure if the socialist, communist, democratic or even anarchist utopia is possible,” a voice on “The Ex-Worker” podcast intones. “Rather, some insurrectionary anarchists believe that the meaning of being an anarchist lies in the struggle itself and what that struggle reveals.”

In other words, it’s not really about George Floyd or Black lives, but insurrection for insurrection’s sake.