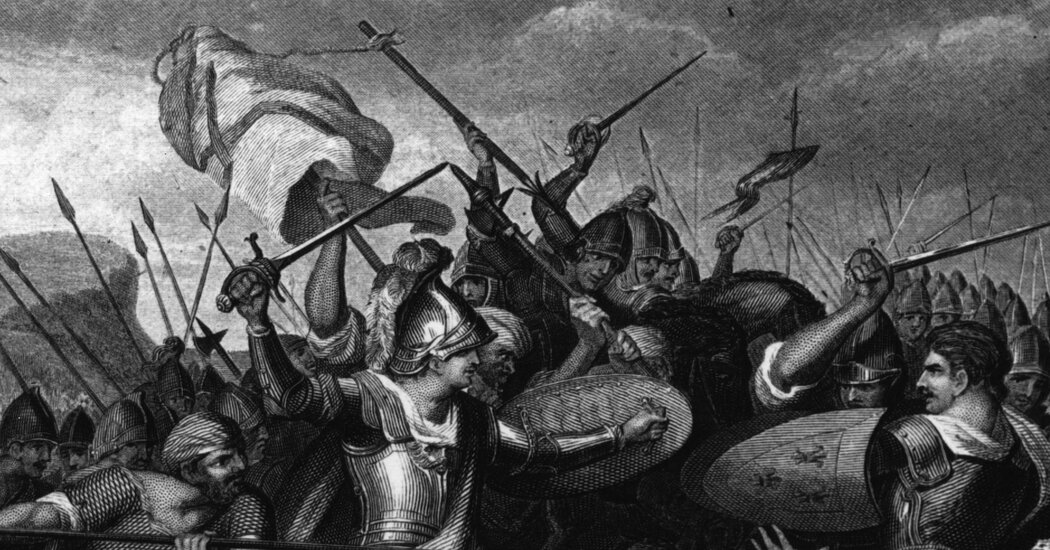 WASHINGTON — When I got the invitation from the French ambassador for a black-tie gala called “Améthyste,” I wondered what that name meant. Was it a promotional party for a French jewelry company or maybe a new perfume?

I didn’t go to the Thursday fête, because I’m studying for a master’s at Columbia University and I had to read “Henry V” — and watch Laurence Olivier, Kenneth Branagh, Tom Hiddleston and Timothée Chalamet armor up to play the king at the Battle of Agincourt. Little did I know that I could have done my homework at the party, because the Hundred Years’ War is still raging in the French and British Embassies in D.C.

Once more unto the breach, dear friends!

Améthyste, it turned out, was a French troll of the British: It’s the name of a French nuclear submarine. A recent sub deal — where the Australians canceled plans to buy French diesel-powered submarines after secretly negotiating with the British and Americans to build nuclear-powered ones — torpedoed relations among all four countries.

We few, we unhappy few …

Suffice it to say, British and Australian diplomats were nowhere to be seen at the party, at the residence of Ambassador Philippe Étienne, where Joe Manchin was, naturellement, busy holding court.

One of the co-hosts of the party, Steve Clemons, a journalist here, told me it was a sheer coincidence that the name of the purple gem chosen to make a statement about healing and unity — that red and blue Washington should blend into more of a purple hue — also turned out to evoke the dastardly sub snub.

Clemons said Tom Bossert, a homeland security adviser under Donald Trump, came up to tease, “Steve, I may be the only one who knows that Améthyste is named after a nuclear submarine.” (Leave it to the French to give a seductive name even to a sub.)

Once the guests — who wandered through an Absinthe Room with flashing green lights, past mimes and mounds of cheese and charcuterie — learned the nautical meaning of Amethyste from a post by Tara Palmeri in Politico’s Playbook, they weren’t buying the coincidence excuse, either.

But no one was surprised at the chill between the French and British Embassies. It takes very little to get the two countries to start trashing each other.

Shakespeare’s history plays are still very alive for the British; Boris Johnson has worked for years on a book about Shakespeare. In “Henry V,” the French are portrayed as catty, wimpy and, in the case of killing boys in the English camp, “cowardly rascals.”

Joan of Arc — who inspired the French to win back their country from the English after Henry V conquered it and then married a French princess — is still burning in the French imagination.

The mutual contempt is embedded in their language. Filer à l’anglaise means to slip away rudely without saying anything, in the English way.

But things are at a particularly low ebb now in terms of relations across the channel. There was the submarine scandale and a nasty territorial fishing dispute with the French seizing a British trawler. And the Brexit divorce still galls, making it harder for the two small nations that always projected power way beyond their size to show puissance, a favorite Shakespearean word from the history plays.

They look at each other and see the ghosts of empire.

No country was more disrupted by Britain leaving Europe than France. So much of the trade between the U.K. and France runs across the English Channel. Donc, the French took it very personally.

The French want to show that the British exit from the European Union is a failure, scaring other countries who might consider leaving. The Brits want to show that it is a success. There’s friction between Boris Johnson and Emmanuel Macron. Johnson thinks Macron is bit of a twit, and Macron thinks Johnson can be amusing but is a big, fat fibber.

This misalliance was not helped when Johnson was here in September and said the French were making too much of the sub spat, noting “Donnez-moi un break” and telling them to “prenez un grip.” He also trolled the French by dining at the Australian Embassy with the Australian prime minister, Scott Morrison.

Still, the lingering tensions have their uses domestically. Macron is trying to move right to fend off the French Trump, the TV commentator Éric Zemmour. And Johnson has an incentive to stir things up, too, amid inflation and fuel and food shortages. As Henry IV advised his son, the best way to distract from domestic problems is to divert “busy giddy minds with foreign quarrels.”

Meanwhile, the British and French Embassies are deep in their own competition to woo top Biden officials. Some Brits rolled their eyes recently when they heard that the French had given Secretary of State Antony Blinken’s mother, Judith Pisar, a prestigious honor, though, given her time as a cultural figure in France, she certainly had merit. There was more eye-rolling at the double-entendre of the Améthyste gala.