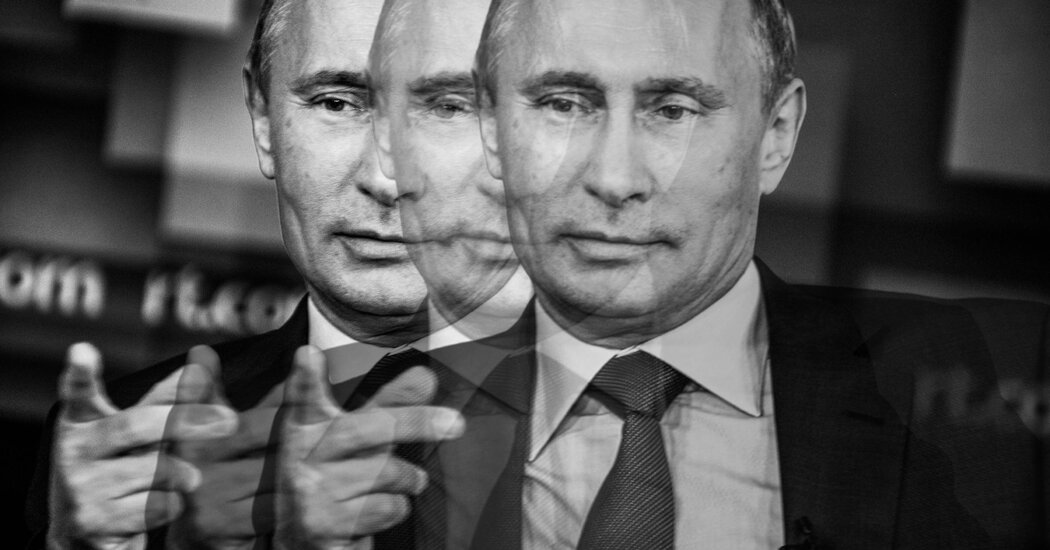 MOSCOW — President Vladimir Putin of Russia is playing a game of suspense.

When he kicked over the global chessboard late last year, amassing thousands of troops at the Ukrainian border, he sent the world into panic. An invasion seemed imminent — and beyond it loomed the threat of a new global confrontation, contested by nuclear-armed powers. Things haven’t calmed down since: A call between Mr. Putin and President Biden on Dec. 30, where the leaders traded threats, did little to take the sting out of the situation. Any incident along the Russian-Ukrainian border could bring an inferno.

The Kremlin’s reasoning for the escalation is curious. It is acting in response, it maintains, to the West’s “drawing Ukraine into NATO” and NATO’s encroachment on what the Kremlin views as Russia’s area of influence. But that looks like a bluff, or even trolling. The truth is that NATO, for all its welcoming gestures, is not ready to offer Ukraine membership.

So what is Mr. Putin’s endgame? The immediate aim, to be sure, is to return Ukraine to Russia’s orbit. But that’s only a brush stroke on a much bigger canvas. Mr. Putin’s design is grand: to refashion the post-Cold War settlement, in the process guaranteeing the survival of Russia’s personalized power system. And judging from the West’s awkward, anguished response so far, he might be close to getting what he wants.

In recent years, Mr. Putin has successfully revived Russia’s tradition of one-man rule by amending the Constitution, rewriting history and clamping down on the opposition. Now he seeks to provide the system with a sturdy Great Power spine, returning to Russia its global glamour. In the past decade, Mr. Putin’s Russia not only demonstrated its readiness to resume control over the former Soviet space, testing its ambitions in Georgia and Ukraine, but also left its footprints all over the world, including through meddling in Western democracies. Yet today’s standoff over Ukraine takes things to a new level.

No longer content with upsetting the West, Mr. Putin is now trying to force it to agree to a new global dispensation, with Russia restored to eminence. It doesn’t stop there, though. Crucially, the geopolitical advance would serve to safeguard Mr. Putin’s rule. So the West, by accepting Russia’s geopolitical position, would effectively underwrite its domestic agenda, too. The United States would become, at home and abroad, Russia’s security provider. It’s quite the gambit.

The timing is crucial. With the European Union consumed by its own challenges and the United States’ rivalry with China yet to reach top gear, the Kremlin is seizing the moment to pursue its grand design. To do so, it could put on the war helmet at any moment. But confrontation is not the Kremlin’s goal. The escalation is about peace on Russia’s terms.

Right now, it’s hard to know what comes next. Mr. Putin can’t force his Western opponents to surrender; neither is he ready to retreat. But he could use both concessions and refusals to pursue his agenda. Concessions, such as NATO explicitly pledging not to expand any further east, would be presented as victories, and refusals as the pretext for further escalation. One success is already clear: The West has been forced to reward Russia — through outreach, diplomacy and, above all, attention — for the charitable act of not invading Ukraine.

Russia’s rebellion threatens to turn geopolitics into a battle of threats — force on one side, sanctions on the other. Mr. Putin’s method is tried and tested: He ratchets up the tensions and then demands “binding agreements,” which he does not take seriously. The aim, really, is a Hobbesian world order, built on disruption and readiness for surprise breakthroughs.

This order has nothing in common with those fashioned at the Yalta Conference in 1945, say, or the Congress of Vienna in 1815. Their architects followed the rules. The Kremlin is suggesting something very different: the irrelevance of rules. The norms by which the world has been governed for the past three decades would be thrown out, in favor of creative interpretation of the possible. In this free-for-all, Mr. Putin — mercurial master of suspense and the sudden move — can pursue his fusion of geopolitical power and personal rule.

Today, Ukraine is the jewel to fight for. But it won’t end there: Belarus, whose embattled leader relies on Russia’s support, could be the next prize in the geopolitical rivalry — or perhaps it will be Kazakhstan, where popular anger at the corrupt, Russian-backed regime has erupted. The drama is just beginning. Other neighboring countries could become hostages of Russia’s system of survival, which requires external domination for the sake of internal security.

So far, the Kremlin has been extremely lucky, or extraordinarily skilled, in playing a weak hand without aces up its sleeve. It deals with a Western establishment determined to maintain the status quo, even if that means accommodation. After all, the nature of globalization precludes serious containment policy: How can the West deter Russia when it is enmeshed in a web of economic and security ties with the Russian state?

Mr. Putin no doubt senses the advantage. Having dealt with the Western leaders for decades, he seems to have concluded that he can play bully. That the United States quickly agreed to start talks suggests Mr. Putin’s strategy is working: It could take months before Western partners discover that they have been engaged in an exchange of hot air.

They clearly have yet to work out how to respond to the Kremlin’s policy of suspense. By forcing the world to guess what Russia is up to and pursuing mutually contradictory policy lines simultaneously, the Kremlin keeps the West disoriented. Accustomed to functioning in rational, risk-averse ways, the West doesn’t know how to react to such “organized chaos.”

There are several traps into which Russia and the West could fall. The kind of sanctions the Biden administration is reportedly considering could be devastating for the Russian state and its elites, which are integrated into the West. And ordinary Russians are not going to sacrifice their living standards indefinitely for wars and antagonism. According to the independent Levada Center, in 2021 only 32 percent of Russians wanted to see Russia as “a great power respected and feared by other countries,” and just 16 percent thought the war could raise Mr. Putin’s authority. The patriotic drug of militarism has started to wear off.

There is a Catch-22 for the West, too: Any bargain that would allow the Kremlin to interpret the global rules of the game would undermine Western principles. Yet rejecting the bargain could incite the Kremlin to wreck the whole shop. The world’s liberal democracies are hardly ready for a clash with a nuclear opponent.

This is a deadlock, and there appears to be no way out. Both sides continue to play “who blinks first”: America and its allies have set out to reassure Ukraine of their support, while Russia has kept the hammer of military deployment ready. A meeting in Moscow on Thursday between representatives of Russia, France and Germany made little headway. Negotiations begin in earnest next week, as Russia and America — later joined by NATO members — aim to find the areas where agreement is possible and where it isn’t.

It’s a tall order. And even if such efforts manage to temporarily tamp down the situation, mutual suspicion will linger. The reason is simple: For as long as Mr. Putin holds sway, his grand design will never be far away.

Lilia Shevtsova is the author of, among other books, “Putin’s Russia” and “Lonely Power: Why Russia Has Failed to Become the West and the West Is Weary of Russia.”