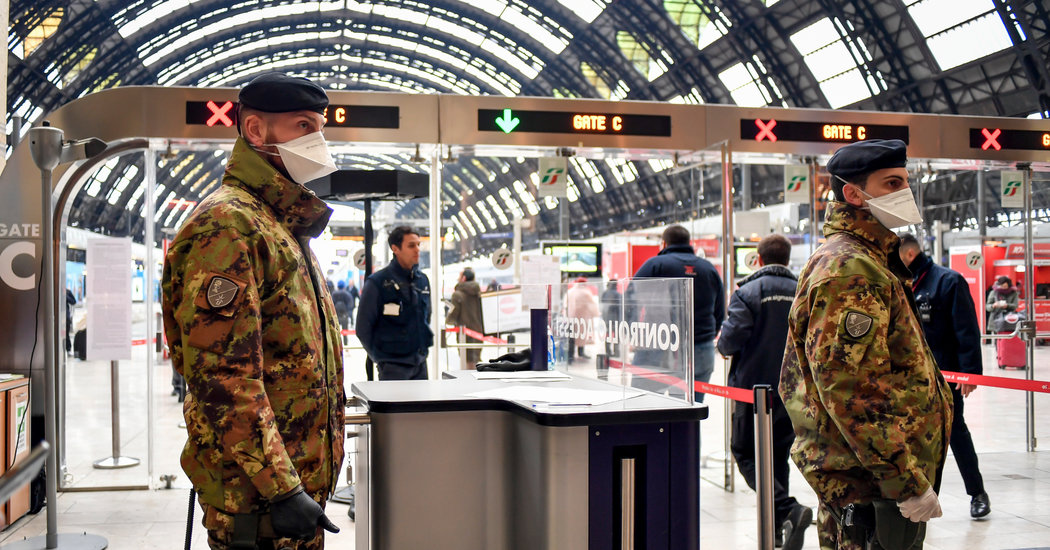 MILAN — You glance at the headlines, just before going to bed on a Saturday evening, to discover your town has been put in lockdown. Or is about to be. It’s not clear. Apparently, the order hasn’t been signed yet. Social media shows people rushing to the station, mainly for the last trains south. This is Milan, economic dynamo of Italy, the only city in the country that has grown stronger and richer through the long years of stagnation since the financial crisis of 2008. An enormous number of people who work here are from the south. If the city is shutting down for the coronavirus, they want to be home.

On Sunday morning, my partner and I eat breakfast listening to Prime Minister Giuseppe Conte addressing the nation. A recording made in the small hours. It was utterly irresponsible, he tells us, for someone to leak a rough draft of the order before it had been finalized. It caused immense confusion. Still, the fact remains that 14 million people in northern Italy are now in lockdown — and we’re among them. But thousands of people have already left, very likely taking the virus with them. The governors of the southern regions of Calabria, Campania and Puglia are furious and announce that these arrivals will face restrictions.

That’s the kind of world we’re in now. In just two weeks, all the usual certainties have gone. It’s been a spiritual exercise in letting go. You paid for season ticket on the subway, now you realize subway travel is the surest way of getting the disease. You have a subscription to the gym, the gym is closed. So is the cinema. Your tickets for concerts and football games are useless. Your children can’t go to school. Or university. Even mass is canceled.

What’s the mood? Initially, indignation. Two weeks ago, when the first restrictions came in — banning all kinds of gatherings and closing pubs, though not actually restricting our movement — we were sure they’d overdone it. A cafe owner in downtown Milan told me angrily that one of the best weeks of the year had been blown: carnival, Fashion Week. Hoteliers complained of 90 percent cancellations. Then we saw the number of infections shoot up: a hundred a day. Two hundred, three hundred. On Sunday, 769 in Lombardy alone. On Saturday, Antonio Pesenti, the head of Lombardy’s intensive crisis care unit, predicted that “by March 26 we will have 18,000 sick people, 3,000 of whom will be needing assistance to breathe.” The places in intensive care in particular are under pressure. The hospitals in Milan are already planning to move non-coronavirus patients in intensive care to hospitals in other regions.

This is sobering. Day by day there has been a greater awareness of the need to keep your distance from people, the importance of not shaking hands. Suddenly the elevator stinks of disinfectant. A man opening a door for you stands way back. You realize the girl on the cash desk in the supermarket is wearing rubber gloves. She apologizes when she sneezes and assures you it’s only a sinus condition. A manager complains to a boy at the deli counter that he should have said at once that his next-door neighbor has tested positive.

Everybody is being asked to think not just for themselves, but also for the community. Milan is a highly fragmented city. There are all kinds of ethnic groups — Chinese, Arabs, Hispanics, Filipinos, Indians, any number of Romanians and Slavs, Italians from every region. Even the locals are quite sharply divided between working and middle classes. And of course many of us communicate more online than on the street, speaking to people like ourselves in other countries and continents. But inevitably the virus is bringing a new awareness that we all share the same physical space, Milan, Italy. We really live here, and we sink or swim together. Perhaps we will even have to get to know each other, albeit without shaking hands. I sense a new spirit of unity.

The fallout for the economy will be huge. But paradoxically the government is very likely to be strengthened. The governing coalition is an association of two main parties (the center-left Democratic Party and the maverick Five Star Movement) who disagree on so much that their only reason for staying in office together has been to avoid an election that would favor the right-wing League party, led by the authoritarian and xenophobic Matteo Salvini. But now they have a major issue that’s easy to agree on and that will give them a chance to be united and decisive on behalf of the nation. Support for Mr. Salvini has begun to dwindle.

The government can also spend money. The Stability and Growth Pact, an agreement shared by all members of the European Union, requires Italy to keep its deficit within strict parameters. Even when every economic indicator would suggest the need to invest and spend, as in the present prolonged period of near-zero growth, the government is obliged to beg Brussels for the right to introduce this or that incentive. These requests are frequently denied, and the politicians appear powerless.

But in an emergency as dramatic as this, the government is in a position to seize control. The importance of the nation-state is suddenly obvious: Italians must decide for Italians. Measures to spend 7.5 billion euros, around $8.4 billion, have been announced. More, probably much more, is to follow. Businesses are to be compensated, parents with children of school age are to be given babysitting vouchers, a huge investment is being made to purchase medical equipment and increase hospital capacity. One suspects that when, God willing, the emergency is over, there will be those who will not want to relinquish this newfound power and the sense of identity and responsibility it brings.

For the moment, though, it’s us — ordinary citizens — who feel powerless. Again and again the word “fight” is being used. The metaphor of battle is deployed: We must combat the virus. Yet it turns out the best way to do so is to stay home, which hardly feels like fighting. All the same, when you do run into people, heading for the shops or the pharmacy, the awareness that you must avoid each other is creating a new complicity, like a dance where you can’t touch. One can only hope something of this shared understanding will remain.

Tim Parks is a writer and translator.