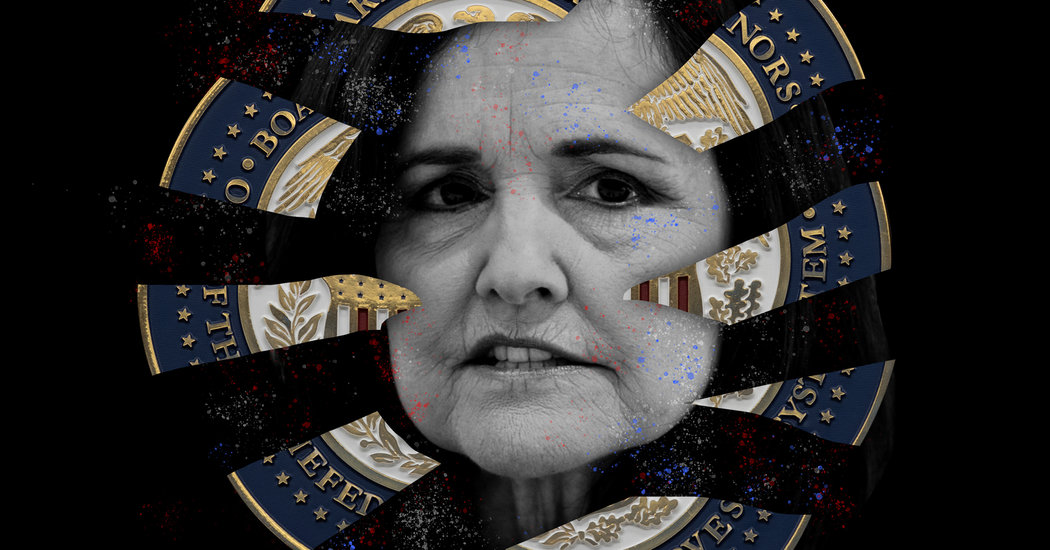 The Federal Reserve takes the Goldilocks view of economic growth: not too hot, not too cold.

President Trump, by contrast, has made it clear that he wants the economy to grow as fast as possible in the short term, even if that increases the risk of an eventual crash. He wants lower interest rates. And in pursuit of that goal, he keeps trying to place loyalists on the Fed’s board.

His latest nominee is Judy Shelton, an economist who has carefully cultivated the president by advising his 2016 campaign, staying at his hotels and loudly supporting low interest rates.

Presidents are empowered to pick central bankers who share their economic views, but not to undermine the goals that Congress has set for the central bank. Just as Mr. Trump crossed a line in naming opponents of pollution controls to lead the Environmental Protection Agency, his nomination of Ms. Shelton amounts to an attack on the Fed’s congressional mandate.

The question now is whether Senate Republicans are inclined to shake up the Fed. The central bank, charged with moderating inflation, minimizing unemployment and regulating the financial industry, spearheaded the government’s efforts to revive economic growth after the 2008 crisis. But since becoming president, Mr. Trump has repeatedly attacked the Fed and its chairman, Jerome Powell, for failing to do more, including in comments this week.

The Senate Banking Committee will hold a confirmation hearing on Thursday for Ms. Shelton and another nominee to the Fed’s board: Christopher Waller, the director of research at the Federal Reserve Bank of St. Louis, a well-credentialed candidate who faces little opposition.

Ms. Shelton, 65, is best known for her fervent and long-running advocacy of an international gold standard, meaning the United States and other nations would agree to fix the value of their currencies in gold, limiting the power of central banks to influence economic conditions by adjusting interest rates. Ms. Shelton has compared the Fed to Gosplan, the Soviet Union’s economic planning agency, and argued Americans would be better off without a central bank.

That is reason enough for the Senate to discard her nomination. The idea of a gold standard has long attracted a fringe element among conservatives enamored of its simplicity and its inflexibility. But it has a disastrous history and little support among mainstream economists. As Senator Richard Shelby, an Alabama Republican, told Politico: “The gold standard would probably shatter a lot of people’s dreams around the world right now. There was a reason to get off of it.”

Even for those inclined to dismiss Ms. Shelton’s primary intellectual preoccupation as irrelevant to her nomination, because there is little chance other nations would agree to revive a gold standard, there is another problem: Her views about the conduct of monetary policy in a world without a gold standard.

Ms. Shelton is among the congregation of conservative economists who passed the Obama years insisting the Fed should raise interest rates to stave off inflation, only, like Mr. Trump himself, to change their minds on or about Nov. 8, 2016. As late as October 2016, Ms. Shelton still was opining that “ultralow” interest rates were exacerbating economic inequality while failing to drive growth. Now she campaigns with roughly equal fervor for the monetary polices she once opposed.

People should be applauded for abandoning erroneous views, and the Republican about-face on monetary policy under Mr. Trump has contributed to a political environment in which it has been easier for the Fed to keep rates at an appropriately low level, supporting growth.

But the shift is politically expedient rather than principled. It is all too easy to imagine the election of a Democrat in November causing Ms. Shelton to press for high rates even if the economy is weak. And there is reason for Ms. Shelton’s erstwhile conservative allies to worry, too: Mr. Trump’s re-election might cause Ms. Shelton to continue her advocacy of low interest rates even if economic growth begins to gain strength.

Ms. Shelton also has embraced Mr. Trump’s view that the United States is engaged in an economic competition with other nations, that some of those nations are prospering at the expense of the United States and that the government should try to turn the tables.

She has expressed particular concern about the advantage other nations can obtain by suppressing the value of their currencies, and thus the prices of their exports to the United States. In an opinion piece published in September by The Wall Street Journal, Ms. Shelton argued that the Fed should respond by manipulating the value of the dollar. “The Fed must take proactive steps to ensure that the U.S. can compete successfully,” she wrote.

The federal government’s laissez-faire approach to exchange rates is ripe for reconsideration, and the Fed benefits from intellectual diversity on its board. But as with Ms. Shelton’s support for lower interest rates, there is reason to doubt whether she would provide that diversity — or simply vote for policies that served Mr. Trump’s short-term political interests.

Republican senators know that Ms. Shelton’s views are problematic. Senator Kevin Cramer of North Dakota said he planned to vote for her, adding, “I wouldn’t want five members like her.”

Why would you want one?