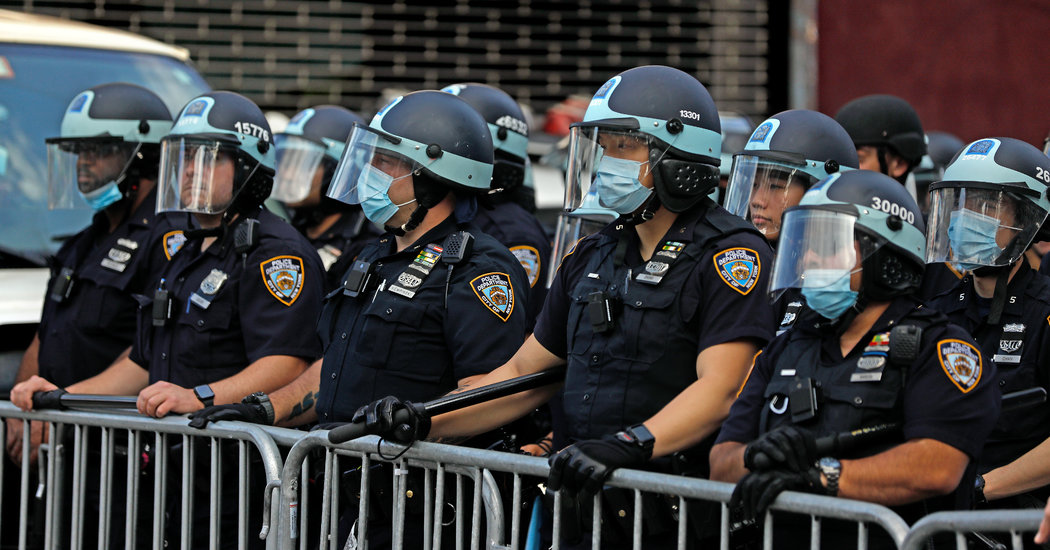 American policing is going to emerge changed from this June of protest. The question is whether it will be altered for the better. So let’s consider three possible scenarios for change — one building on the current system, another more ambitious but also riskier, and a third to be avoided at all costs.

At this point, almost everyone except their union reps agrees that American police officers are too well defended from accountability. Collective bargaining makes police misconduct more common; the terms of union contracts often obstruct disciplinary action. It’s too hard to fire bad cops, too easy to rehire them, too difficult to sue them, too challenging to win a guilty verdict when they’re charged with an offense. All of which means it’s too easy for cops to get away with abuse, violence, murder.

On the other hand, as Charles Fain Lehman of The Washington Free Beacon points out, police departments aren’t as awash in funding as the rhetoric of “defund the cops” — even in its milder or nonliteral interpretations — would suggest. As a share of budgets, state and local spending on the police increased in the 1990s but has been flat or falling for the last two decades. (Indeed, cities may be offering sweeping union protections to their cops as a way to avoid paying them more money.) Despite frequent suggestions that the United States overspends on policing, as a share of gross domestic product, the European Union spends 33 percent more on cops than the United States does — while spending far less than us on prisons.

There are good reasons to think that the Europeans know what they’re doing. A substantial body of research suggests that putting more cops on the beat meaningfully reduces crime. And even the American neighborhoods that suffer most from police misconduct and brutality are often still under-policed when it comes to actually solving murder cases.

Thus the possible grand bargain: Spending more money on the police even as you roll back their union protections. This lets you attack the problem of bad policing and the problem of underpolicing simultaneously. You can hire extra officers, recruit more minority candidates, recruit higher-caliber candidates and weed out poor ones, and allocate more money and time for training. As a political matter, the extra money gives police departments something in exchange for losing their current overprotected status; as a practical matter, the deal aspires to make the police more trusted and more effective, leaving citizens safer from crime and from cops like Derek Chauvin.

If the grand bargain works with the policing system that we have, the reimaginers think we could have a very different one. What we think of as policing could be subject to “unbundling,” a term coined by the music entrepreneur Trevor McFedries and elaborated on recently by the Atlantic’s Derek Thompson. In an unbundled system, there would still be a core of cops charged with halting and investigating crimes, but the disparate roles the police are asked to play — patrolling for traffic violations and showing up at accidents, responding to calls for mental health interventions, managing the homeless — would be distributed to teams of unarmed traffic managers and social workers.

Taking this redistribution further, the Princeton sociologist Patrick Sharkey has argued, local communities might take on more responsibility (and receive more public money) for crime-fighting efforts that don’t require armed agents of the state. And the definition of crime-fighting would be expanded to include activities that lower crime without arresting criminals: after-school programs, business development, neighborhood beautification and more. (You could think of some of this as “broken windows” policing without the cops, where the goal is to reshape the lived environment in ways that make a neighborhood inhospitable to crime.)

These ideas are interesting and ambitious, but they also have their share of difficulties. One argument for “bundled” policing in the United States is that we’re a heavily armed country in which traffic stops and mental health interventions are more likely to end in gunfire than elsewhere. So just implement gun control, comes the response … except that the kind of gun restrictions required to change that reality could be enforced only with the kind of invasive, stop-and-frisk policing that recreates the problems that police reformers want to solve. There’s probably no simple path to becoming the kind of country where agents of the state routinely go unarmed.

The idea of slowly replacing the police with programs that dig away at crime’s root causes, meanwhile, requires a precise policymaking calibration: If your police drawdown runs too far ahead of your attempted neighborhood development, rising crime will swamp the redevelopment project no matter how much you beautify the streets. There’s an unhappy American history, not so far back in our past, of the government spending money on urban redevelopment and finding that a crime wave overwhelmed those efforts.

Of course, it’s increasingly an article of faith among younger activists that law enforcement strategies didn’t actually influence that post-1960s crime wave — that crime rose and fell for other reasons, perhaps some combination of the baby boom’s youth bulge and lead exposure, justified racial protest and racist white flight.

I suspect they’re partly right: There are good reasons to think the sheer scale of the 20th-century crime wave won’t be repeated in a much older, more online and surveilled America. But as the “more cops, less crime” research suggests, the cold-eyed conservative case that violent crime rates rise and fall with policing tactics and incarceration rates still has a lot of evidence behind it. (Even a notable champion of prison reform like the late public policy scholar Mark Kleiman has suggested that America may have under-incarcerated in the 1960s and 1970s, making crime pay by letting too many people get away with it.) So any attempted transformation of the police has to recognize that the cost of a substantial failure might be paid in unsafe streets and lost lives.

And if transformation doesn’t take hold, we could end up with the third scenario …

The worst of both worlds

This is a future where the defund-the-police cause gets its way on budgeting, and police spending falls in strapped cities, but without any substantial reforms to make cops more accountable or any of the creative community-based spending that Sharkey imagines as a substitute for aggressive policing.

In this future, rogue cops might get prosecuted slightly more often, as a show of principle by elected officials worried about renewed protests or media outrage. But as a systemic matter you’d get underfunded police departments retreating from their duties, an increasing anti-cop stigma discouraging good candidates from joining the force, and more cities and communities left in the position of Baltimore after the Freddie Gray riots — liberated from abusive cops but handed over to a more pervasive violence.

The righteous focus on police brutality at the moment means that this peril is a long way from most protesters’ minds, and there is a lot of free-floating utopianism (not only in Seattle’s version of the Paris Commune) about what an America with many fewer cops would look like.

But for the lives and streets that police officers exist to safeguard, the proposals to weaken unions and hold cops more accountable remain by far the safest path to reform, limited by their modesty but also limited in their potential harms. While the bigger ideas for an entirely different system of policing, defunded or transformed, come with a greater danger that what happened 50 years ago, the ruin of too many neighborhoods and cities, could tragically recur.