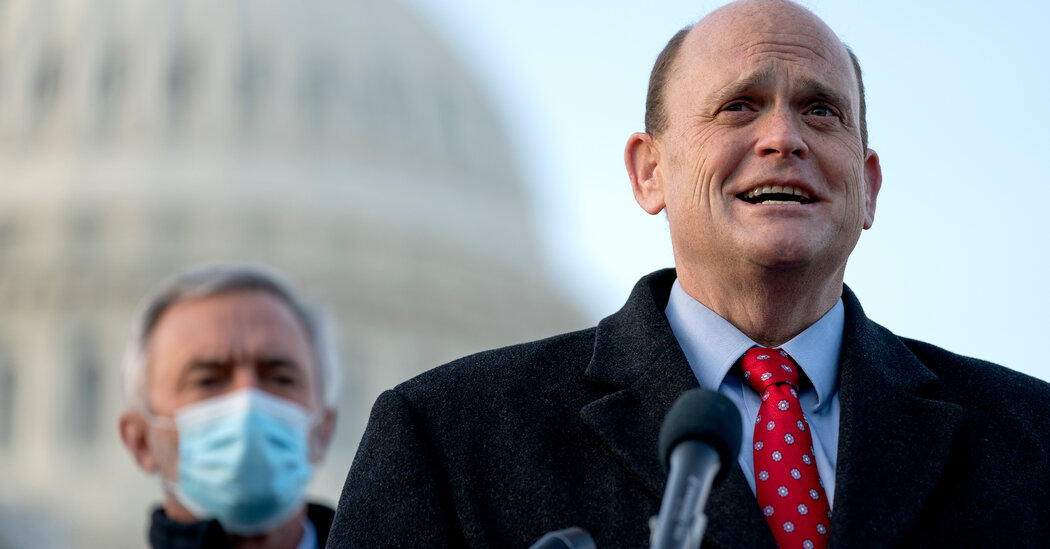 The congressman from New York, who has been eyeing a run against Gov. Andrew Cuomo, did not specify what parts of the account of his actions in a bar in 2017 were inaccurate.

Representative Tom Reed, Republican of New York, on Friday disputed the accuracy of a news report detailing the allegations of a former lobbyist who said he touched her inappropriately during a weekend political trip in 2017.

The woman, Nicolette Davis, told The Washington Post that she was a 25-year-old lobbyist for the insurance company Aflac when Mr. Reed groped her at an Irish pub in Minneapolis after a day of ice fishing with donors, politicians and lobbyists. The congressman was drunk, she said, and while sitting at the bar, he placed his hand on her back, unclasped her bra through her blouse and moved his hand up her thigh before Ms. Davis asked the man sitting next to her to intervene.

Mr. Reed, 49, who has served in the House since 2010 and is now mulling a run for governor in New York, declined to discuss the allegation with reporters in the Capitol on Friday. In a statement, he said that the “account of my actions is not accurate,” but he did not elaborate or deny the encounter outright. His spokesman did not respond to detailed follow-up questions, including what specific allegations the congressman disputed.

Ms. Davis, who is now a second lieutenant in the Army, could not be reached. She told The Post that though she was a lifelong Democrat, it was her “conscience” and desire to set an example for others that had led her to share her story publicly.

Jon A. Sullivan, a spokesman for Aflac, confirmed on Friday that Ms. Davis sent a text message to one of the her colleagues asking for “HELP” as Mr. Reed was rubbing her back. She also reported the episode to another colleague shortly after it happened, he said.

“When this matter was reported to senior leadership and colleagues who were not present at the event, we immediately provided support and counsel for Nicolette, enabling her to determine personally how she wanted to proceed with regard to bringing this deeply troubling experience to light,” he said in an emailed statement. “Nicolette continues to have 100 percent support from Aflac, as we strongly condemn any form of abuse or harassment.”

The Post said that Ms. Davis contacted the paper through its tip line in mid-February. The paper also spoke to a person who said they had witnessed a visibly drunk Mr. Reed put his hand on Ms. Davis’s back, describing the account on condition of anonymity.

Ms. Davis also more recently reported the incident to the Army, which referred it to police in Minneapolis. Cynthia O Smith, an Army spokeswoman, directed a reporter to the city’s police department, which declined to comment.

Mr. Reed told Fox News in February that he was “seriously considering” a run for governor in 2022. He has been an outspoken critic of Gov. Andrew Cuomo, calling for the Democrat to resign or be impeached amid a wave of accusations of sexual harassment and other misconduct. He called the governor’s behavior “disturbing and unacceptable.”

“I’ve been asked by many people to do this for months because I think they appreciate the way I govern,” Mr. Reed said in February, before the string of harassment allegations against Mr. Cuomo. “Not governing by arrogance, bullying like Governor Cuomo does, but trying to bring people together as a proud Republican.”

Mr. Reed is a former mayor of Corning, N.Y., who now represents a large, rural district in the western part of the state, including Ithaca and parts of the Finger Lakes. As a leader of the bipartisan House Problem Solvers Caucus, Mr. Reed has cultivated a reputation in Washington as a middle-of-the-road Republican eager to work with Democrats on thorny policy issues.

He has been an vocal proponent of sexual harassment training for members of Congress and their staffs, and in 2014, wrote an op-ed for The Huffington Post trying to raise awareness about sexual assault.