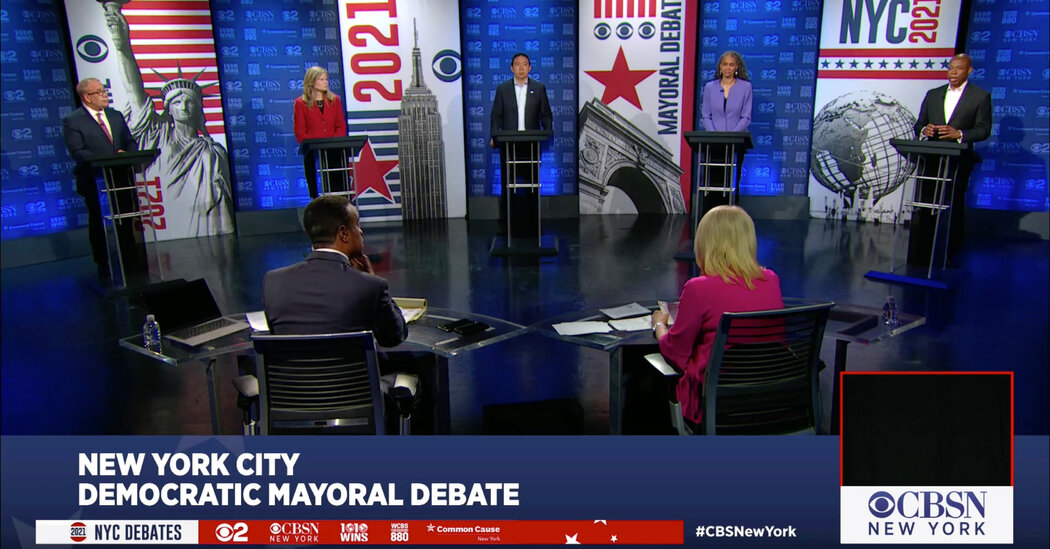 The debaters’ focus on Mr. Adams, centering on questions of his residency, reflected his front-runner status in the race for New York City mayor.

The top Democratic candidates in the New York City mayor’s race clashed sharply over political visions and personal ethics in a debate that began with sustained attacks against one candidate, Eric Adams, over questions of his residency and transparency.

Two days before early voting begins and less than two weeks before the June 22 Democratic primary that will almost certainly decide the city’s next mayor, five leading contenders gathered on Thursday for an in-person, penultimate debate that centered on issues of public safety, managing the mayor’s relationship with Gov. Andrew M. Cuomo and qualifications to lead the nation’s largest city.

The one-hour debate arrived at an unsettled moment in an extraordinarily consequential race, as several contenders battled controversies, while sparse public polling shows a tight and unpredictable contest that will be settled by ranked-choice voting.

It began on a highly contentious note, as four of the five candidates onstage were asked whether they believed that Mr. Adams, who is considered the leading candidate, indeed lived in New York City, following a Politico New York report that Mr. Adams used conflicting addresses in official records, and that he was spending nights at Brooklyn Borough Hall in the homestretch of the campaign.

Mr. Adams, who has said that he moved into Borough Hall for a time after the pandemic hit to focus on the workload, has said his primary residence is an apartment in the Bedford-Stuyvesant neighborhood of Brooklyn. He also co-owns a co-op with his partner in Fort Lee, N.J.

“Eric, unfortunately, has not only been not straightforward, but he’s been hypocritical,” charged Andrew Yang, the former presidential candidate and perhaps Mr. Adams’s most persistent critic on the stage on Thursday. “He spent months attacking me for not being a New Yorker. Meanwhile, he was attacking me from New Jersey.”

Maya D. Wiley, a former counsel to Mayor Bill de Blasio, alluded to other controversies including investigations of Mr. Adams’s fund-raising practices, and said that “the issue is honesty.”

“I served as a police officer in Brooklyn, I became a state senator elected from Brooklyn and now I am the Brooklyn borough president,” Mr. Adams shot back. Taking a swipe at Mr. Yang, who spent part of the pandemic at a weekend home in the Hudson Valley in New York, he continued, “I know what people are concerned about on the ground because I’m on the ground. I don’t live in New Paltz, I live in Brooklyn.”

Mr. Adams’s participation in the debate, co-hosted by WCBS-TV, had been in question. He indicated on Tuesday that he would skip the event, saying he would instead attend a vigil for a 10-year-old killed in gun violence in Queens. On Thursday, he reversed course. In between, a firestorm ensued tied to questions surrounding Mr. Adams’s residency.

Beyond the substance of the questions, the fusillade of attacks also reflected Mr. Adams’s standing in the race: He has increasingly led available surveys as he presses a message that he says is focused on issues of both public safety and criminal justice. More than any other candidate, Mr. Adams has discussed issues of rising gun violence and other crime, at a time when polls show public safety to be a top priority for New York Democratic voters. At the debate, the contenders focused on issues of gun violence as well as hate crimes.

“We have seen an uptick in anti-Asian hate crime, but we’ve also seen an uptick in anti-Semitism,” said Kathryn Garcia, the former sanitation commissioner, who was a far more forceful presence in Thursday’s debate than she has been in previous contests. She went on to sketch out plans for confronting mental illness and homelessness as part of the solution.

And as in previous debates, some of the clearest distinctions in the field emerged over issues of public safety, as Ms. Wiley staked out some of the most left-leaning positions on the stage.

Asked about the idea of taking guns away from New York Police Department officers, every candidate except for Ms. Wiley said no. She did not answer directly, instead discussing the importance of “smart policing.”

“I am not prepared to make that decision in a debate,” she said, even as she also said that “the mayor’s job is safety. Safety is job one, and I’m going to keep New Yorkers safe when I’m mayor.”

The answer stood in contrast to one offered by Scott M. Stringer, the city comptroller, who, like Ms. Wiley, has sought to appeal to the most progressive voters in New York.

“We’re not taking guns away from the police,” Mr. Stringer said flatly. “We’re going to make sure that we create a police force that focuses on rooting out violent crime, and at the same time ensures the civil rights of our young people.”

Ms. Wiley also argued passionately that investments in the social safety net, especially a proposal for more trauma-informed care in schools, would go a long way toward preventing violence like the shooting in Queens.

“Justin Wallace is not dead because we don’t have enough police officers,” she said, referencing the 10-year-old. “He is dead because we have never in this city done the very thing that communities like in the Far Rockaways, or Washington Heights or Mott Haven, have been asking us for, which is trauma-informed care in our schools, which is in my plan.”

Mr. Yang offered an impassioned critique of a law enforcement system that would allow people who have been arrested several times to remain unsupervised, citing a man who was accused of punching an Asian woman, one incident in a long series of arrests.

“New Yorkers deserve to be safe on our own streets,” he said. “We have to get people who need help, the help that they need, regardless of whether they have the capacity to raise their hands and seek it.”

On the whole, the debate was more civil and less chaotic than the previous matchup, which at times devolved into a brawl. Certainly, there were key areas of agreement: All five of the candidates onstage said that New York should consider renaming sites that had been named for slaveholders.

But clear differences were on display, too, on policy and politics. The candidates clashed over the most effective way to deal with Mr. Cuomo, given that governors and mayors in New York historically have had tense relationships.

“Andrew, your approach is naïve,” Mr. Stringer replied. “This is not how Albany works, Albany will go after you. Albany will collapse you if you don’t understand that the forces around the state do not want us to get the funding that we deserve.”

Mr. Stringer has cast himself as a seasoned government hand with a slate of progressive policies. His ability to engage younger left-wing voters, though, was hampered after a woman earlier this spring accused him of making unwanted sexual advances during a 2001 campaign, allegations he denied.

Last week, a second woman accused Mr. Stringer of making unwanted sexual advances when, she said, she worked at a bar he co-owned decades ago. Mr. Stringer said he did not recall Teresa Logan, the woman making the allegations, but said he apologized if he had met her and made her uncomfortable.

“I want to be held accountable to anyone who wishes, the press or otherwise, to investigate what took place 30 years ago and 20 years ago,” he said. “Unfortunately, in the middle of a campaign, it has been a struggle to find a way to communicate that. Now it’s up to the voters to look at my 30-year record of service and personal history and make a decision as to who’s best qualified for mayor.”

Ms. Wiley is seeking to emerge as the standard-bearer for the left wing of the Democratic Party, part of her effort to build a coalition that includes voters of color from across the ideological spectrum as well as white progressives.

Over the last week, prominent progressive lawmakers and leaders have made a major push to consolidate around her campaign: Representative Alexandria Ocasio-Cortez backed her last weekend; Jumaane D. Williams, the New York City public advocate, did the same on Wednesday.

Dianne Morales, a former nonprofit executive, had also been battling for support from the left-wing grass-roots, but amid a campaign uprising and fight over unionizing efforts, she terminated dozens of workers this week, according to the union. She was not invited to participate in Thursday’s debate, nor were two other candidates who have participated in prior debates: Shaun Donovan, the former federal housing secretary, and Raymond J. McGuire, a former Citi executive.