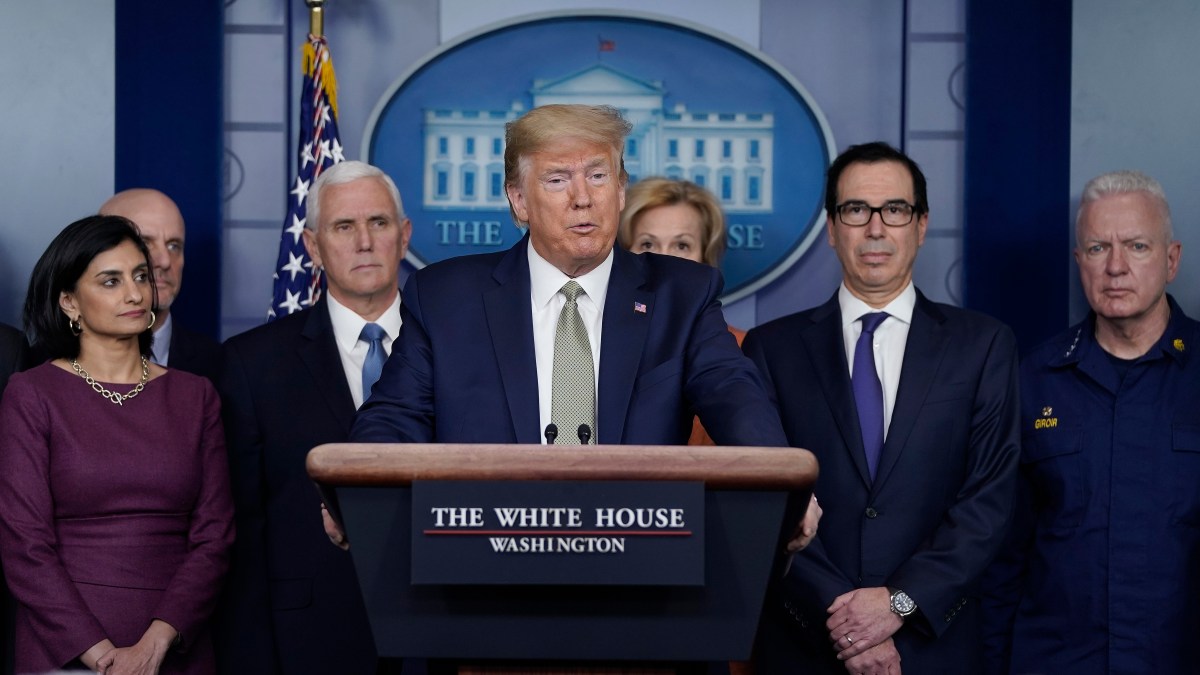 By a sweeping bipartisan tally, the Senate on Wednesday approved a $100 billion-plus bill to boost testing for the coronavirus and guarantee paid sick leave for millions of workers hit by it — and President Donald Trump quickly signed it. But lawmakers and the White House had already turned their focus to the administration’s far bigger $1 trillion plan to stabilize the economy as the pandemic threatens financial ruin for individuals and businesses.

Details on Trump’s economic rescue plan remain sparse — and it’s sure to grow with lawmaker add-ons — but its centerpiece is to dedicate $500 billion to start issuing direct payments to Americans by early next month. It would also funnel cash to businesses to help keep workers on the payroll as widespread sectors of the $21 trillion U.S. economy all but shut down.

In a memorandum, the Treasury Department proposed two $250 billion cash infusions to individuals: the first set of checks issued starting April 6, with a second wave in mid-May. The amounts would depend on income and family size.

The Treasury plan, which requires approval by Congress, also recommends $50 billion to stabilize the airlines, $150 billion to issue loan guarantees to other struggling sectors, and $300 billion for small businesses. The plan appears to anticipate that many of the loans would not be repaid.

Taken together, the administration plan promises half of the $1 trillion to families and individuals, with the other half used to prop up businesses and keep employees on payroll.

Direct payments would go to U.S. citizens only, and would be “tiered based on income level and family size.” The two payments would be identical, with the second wave starting by May 18.

The Treasury outline provides a basis for lawmakers to work from in an unprecedented government response and is likely to be broadened to include additional emergency funding for federal agencies.

The price tag for the upcoming economic package alone promises to exceed Treasury’s $1 trillion request, a rescue plan not seen since the Great Recession. Trump is urging Congress to pass the eye-popping stimulus package in a matter of days.

The Senate plans to remain in session until the third coronavirus bill passes, with weekend sessions possible. The process ahead is uncertain, but pressure is enormous on lawmakers to act fast and not allow gamesmanship to get in the way of results.

Economists say the country is probably already in recession and the stock market continued its free fall Wednesday. The panic has many lawmakers shedding their ideological baggage to grapple with an enormous undertaking for a crisis that exceeds the scope of the 2008 financial panic — a virtual weeks-long shutdown of many businesses and unemployment that could spike to 20% by some estimates.

At the Capitol on Wednesday, Senate Majority Leader Mitch McConnell prepared his colleagues for unprecedented steps to deal with the epidemic’s assault on the economy.

“I will not adjourn the Senate until we pass a far bolder package,” McConnell said. “We aren’t leaving until we deliver.”

But first, the Senate approved a $100 billion-plus House-passed package of sick pay, emergency food aid, free testing and more money for Medicaid, despite Republican objections over the potential impact on small businesses saddled with a new mandate to pay sick leave. The government would reimburse businesses, but business advocacy groups say the plan isn’t workable for many small firms. Still, only eight Republicans voted no.

“This legislation is not perfect, but we cannot let the perfect be the enemy of the good,” said GOP Sen. Todd Young of Indiana.

Trump, whose support of the package swayed most Republicans, quickly signed it Wednesday night.

McConnell is trying to take control of the third coronavirus effort, putting GOP chairmen in charge and promising to consult with Senate Democrats later. Top Senate Democrat Chuck Schumer of New York blasted McConnell’s approach, saying it’s “too cumbersome, too partisan and will take far too long, given the urgency and need for cooperation.”

Schumer has spoken with Treasury Secretary Steven Mnuchin, however, and retains considerable influence as the Senate plans to work into the weekend to try to pass the measure. Pelosi and McConnell have talked as well.

Pelosi sent a public signal to McConnell with the release of an authorized readout of a Wednesday call with top Democratic leaders.

“The fastest way to get a third package finished by early next week as Secretary Mnuchin has suggested, is to have a four corners negotiation,” Pelosi said, referring to the top leaders of Congress in both House and Senate.

Wednesday’s Treasury plan includes $300 billion in “small business interruption loans” that would be 100% guaranteed by the federal government to cover six weeks of payroll during the crisis. These loans would be made through private banks — and forgiven in many instances.

“Every penny that they borrow and use for purposes of keeping people employed, they will not have to pay back,” said Sen. Marco Rubio, R-Fla., chief author of a detailed Senate plan.

The plan would also establish a $50 billion lending program dedicated to imperiled airlines, which would be required to keep flying as a condition of securing loans. Another $150 billion would underwrite loans to other business sectors. Details on the loan programs were fuzzy, but terms are sure to be heavily subsidized.

How one person self-isolating can save lives. Chris Glorioso reports.

“The fastest way to deal with the economic crisis is for the federal government to guarantee that all employers will be able to meet their payroll and keep their workers on the payroll,” Sanders told reporters. “It is an expensive proposal, but I think that is the fastest and best way to make sure that working people in this country continue to have a paycheck.”

The Trump request also reverses cuts to the Centers for Disease Control and National Institutes of Health that Trump proposed in his February budget for next year and would create a $3 billion fund for unanticipated needs.

Economists doubted that the massive economic rescue package being drafted would enough to stop millions of job losses, even if in the short term. It’s aimed at helping Americans without paychecks avoid foreclosure and other financial hardships and preventing businesses from sliding into bankruptcy.

The Treasury plan is on par with the $700 billion 2008 bank bailout or the nearly $800 billion 2009 recovery act. The White House proposal aims to provide a massive tax cut for wage-earners, $50 billion for the airline industry and $250 billion for small businesses. But nothing is set in concrete, and all the pressure is for the package to keep growing.

The amount that would be sent out in checks Americans is not yet decided. The White House said it liked GOP Sen. Mitt Romney’s idea for $1,000 checks, though not necessarily at that sum and not for wealthier people.

Senate Democrats produced their own $750 billion proposal, which includes $400 billion to shore up hospitals and other emergency operations in response to the global pandemic and $350 billion to bolster the safety net with unemployment checks and other aid to Americans.

In the House, Reps. Mario Diaz-Balart, R-Fla., and Ben McAdams, D-Utah, released statements saying they had tested positive for COVID-19 — the first two known cases in Congress. Several other lawmakers have cycled in and out of self-isolation after exposure to individuals who had later tested positive for the virus.

The vast majority of people recover from the new virus. According to the World Health Organization, people with mild illness recover in about two weeks, while those with more severe illness may take three to six weeks to recover.