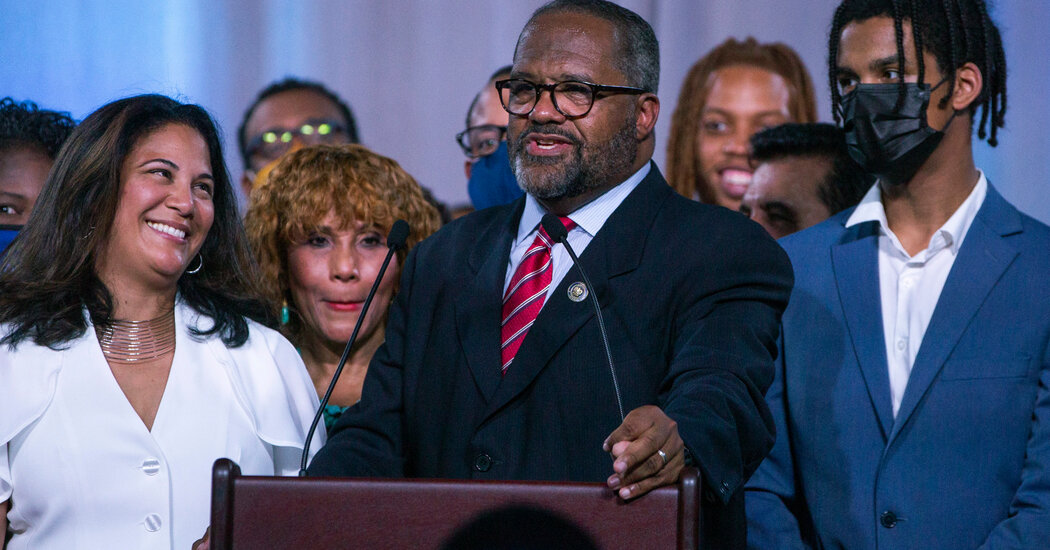 Mr. Carter defeated State Senator Karen Carter Peterson, who ran to the left, capturing 55 percent to her 45 percent with about 80 percent of precincts reporting in a Black-majority district that stretches from New Orleans to Baton Rouge.

His victory represents a vote of confidence in the previous occupant of the seat, former Representative Cedric Richmond, who endorsed Mr. Carter before resigning to become a senior adviser to President Biden.

Winning the support of an array of progressives, Ms. Peterson sought to link Mr. Carter to former President Donald J. Trump, a deeply unpopular figure in Louisiana’s only majority-minority district.

“There will be times when I can work with Republicans, but I am not going to compromise my values on Medicare for all, the Green New Deal, criminal justice reform, passing the George Floyd Act,” Ms. Peterson said in the race’s final debate this week.

A former state Democratic Party chair and vice-chair of the Democratic National Committee, Ms. Peterson is rooted in her party’s establishment wing. Yet she sought to outflank Mr. Carter in the runoff, in part by trying to appeal to the Louisianans who supported the third-place finisher in the first round of voting last month, the Baton Rouge activist Gary Chambers Jr. However, she was not able to consolidate support from many of the white liberals in New Orleans who rallied to Mr. Chambers in March.

In mailers, Ms. Peterson placed images of Mr. Carter and Mr. Trump side by side. “Troy Carter & his Trump supporters, Not for Us!” one of them read.

Mr. Carter rejected the suggestion, calling it “foolishness” and noting in an interview with The Times-Picayune of New Orleans that he is the chairman of his party’s State Senate caucus.

However, he countered Ms. Peterson’s support from Mr. Chambers and other left-leaning groups by trying to win over Republicans and independents, who appeared to play a pivotal role in a low-turnout election.

Mr. Carter, for example, trumpeted his endorsement from Cynthia Lee Sheng, a Republican who is the president of Jefferson Parish, in the New Orleans suburbs. He routed Ms. Peterson there on Saturday.

“Listen, when you’re elected, you’re elected to represent the entire district — Republicans, Democrats, independents and others,” Mr. Carter said at the debate this week. “I will stand for those Democratic ideals that I believe in. I will fight for them until the end. But I will also come to the table to compromise to make sure that I bring resources home for the people of Louisiana.”

With his win on Saturday, Mr. Carter became Louisiana’s sole Democratic lawmaker in Congress, a position that can confer outsize influence on patronage when a Democrat is in the White House.

While both candidates supported abortion rights and gun control, they had differences on how aggressively they would pursue some of their policy objectives.

Ms. Peterson, for example, offered more full-throated opposition to the oil and gas industry, while Mr. Carter called for a more incremental approach toward weaning people off the products of one of the state’s largest industries.

Ms. Peterson enjoyed a financial advantage thanks to spending by outside groups such as Emily’s List, which backs Democratic women who support abortion rights. However, the race has also become something of a local proxy war between competing Democratic factions in New Orleans. The mayor, LaToya Cantrell, endorsed Ms. Peterson, while Mr. Richmond and Jason Williams, the New Orleans district attorney, supported Mr. Carter.