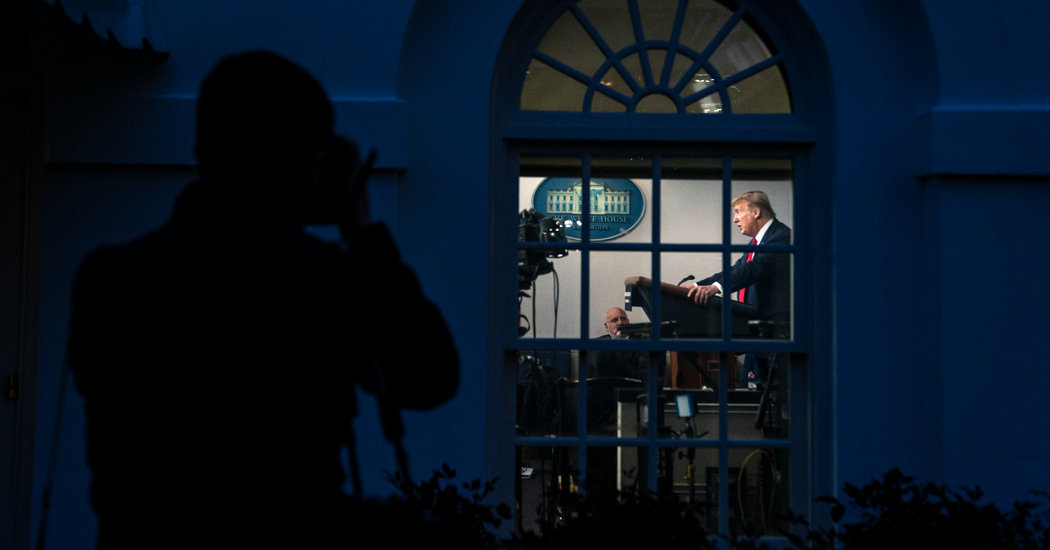 WASHINGTON — President Trump arrives in the Oval Office these days as late as noon, when he is usually in a sour mood after his morning marathon of television.

He has been up in the White House master bedroom as early as 5 a.m. watching Fox News, then CNN, with a dollop of MSNBC thrown in for rage viewing. He makes calls with the TV on in the background, his routine since he first arrived at the White House.

But now there are differences.

The president sees few allies no matter which channel he clicks. He is angry even with Fox, an old security blanket, for not portraying him as he would like to be seen. And he makes time to watch Gov. Andrew M. Cuomo’s briefings from New York, closely monitoring for a sporadic compliment or snipe.

Confined to the White House, the president is isolated from the supporters, visitors, travel and golf that once entertained him, according to more than a dozen administration officials and close advisers who spoke about Mr. Trump’s strange new life. He is tested weekly, as is Vice President Mike Pence, for Covid-19, the disease caused by the coronavirus.

The economy — Mr. Trump’s main case for re-election — has imploded. News coverage of his handling of the coronavirus has been overwhelmingly negative as Democrats have condemned him for a lack of empathy, honesty and competence in the face of a pandemic. Even Republicans have criticized Mr. Trump’s briefings as long-winded and his rough handling of critics as unproductive.

His own internal polling shows him sliding in some swing states, a major reason he declared a temporary halt to the issuance of green cards to those outside the United States. The executive order — watered down with loopholes after an uproar from business groups — was aimed at pleasing his political base, people close to him said, and was the kind of move Mr. Trump makes when things feel out of control. Friends who have spoken to him said he seemed unsettled and worried about losing the election.

But the president’s primary focus, advisers said, is assessing how his performance on the virus is measured in the news media, and the extent to which history will blame him.

“He’s frustrated,” said Stephen Moore, an outside economic adviser to Mr. Trump who was the president’s pick to sit on the Federal Reserve Board before his history of sexist comments and lack of child support payments surfaced. “It’s like being hit with a meteor.”

Mr. Trump frequently vents about how he is portrayed. He was enraged by an article this month in which his health secretary, Alex M. Azar II, was said to have warned Mr. Trump in January about the possibility of a pandemic. Mr. Trump was upset that he was being blamed while Mr. Azar was portrayed in a more favorable light, aides said. The president told friends that he assumed Mr. Azar was working the news media to try to save his own reputation at the expense of Mr. Trump’s.

Hogan Gidley, a White House spokesman, disputed that the president’s focus was on his news coverage, but said in a statement that “President Trump’s highest priority is the health and safety of the American people.”

Aides said the president’s low point was in mid-March, when Mr. Trump, who had dismissed the virus as “one person coming in from China” and no worse than the flu, saw deaths and infections from Covid-19 rising daily. Mike Lindell, a Trump donor campaign surrogate and the chief executive of MyPillow, visited the White House later that month and said the president seemed so glum that Mr. Lindell pulled out his phone to show him a text message from a Democratic-voting friend of his who thought Mr. Trump was doing a good job.

The daily White House coronavirus task force briefing is the one portion of the day that Mr. Trump looks forward to, although even Republicans say that the two hours of political attacks, grievances and falsehoods by the president are hurting him politically.

Mr. Trump will hear none of it. Aides say he views them as prime-time shows that are the best substitute for the rallies he can no longer attend but craves.

Mr. Trump rarely attends the task force meetings that precede the briefings, and he typically does not prepare before he steps in front of the cameras. He is often seeing the final version of the day’s main talking points that aides have prepared for him for the first time although aides said he makes tweaks with a Sharpie just before he reads them live. He hastily plows through them, usually in a monotone, in order to get to the question-and-answer bullying session with reporters that he relishes.

The briefing’s critics, including Mr. Cuomo, have pointed out the obvious: With two hours of the president’s day dedicated to hosting what is still referred to as a prime-time news briefing, who is going to actually fix the pandemic?

Even Dr. Anthony S. Fauci, one of the experts appointed to advise the president on the best way to handle the outbreak, has complained that the amount of time he must spend onstage in the briefings each day has a “draining” effect on him.

They have the opposite effect on the president. How he arrived at them was almost an accident.

Mr. Trump became enraged watching the coverage of his 10-minute Oval Office address in March that was rife with inaccuracies and had little in terms of action for him to announce. He complained to aides that there were few people on television willing to defend him.

The solution, aides said, came two days later, when Mr. Trump appeared in the Rose Garden to declare a national emergency and answer questions from reporters. As he admonished journalists for asking “nasty” questions, Mr. Trump found the back-and-forth he had been missing. The virus had not been a perfect enemy — it was impervious to his browbeating — but baiting and attacking reporters energized him.

“I don’t take responsibility at all,” Mr. Trump told White House correspondents in answer to one question.

His first news conference in the briefing room took place the next day, on a Saturday, after Mr. Trump arrived unannounced in the Situation Room, wearing a polo shirt and baseball cap, and told the group he planned to attend the briefing and watch from a chair on the side. When aides told him that reporters would simply yell questions at him, even if he was not on the small stage, he agreed to take the podium. He has not looked back since.

When Mr. Trump finishes up 90 or more minutes later, he heads back to the Oval Office to watch the end of the briefings on TV and compare notes with whoever is around from his inner circle.

That circle has shrunk significantly as the president, who advisers say is more sensitive to criticism than at nearly any other point in his presidency, has come to rely on only a handful of longtime aides.

Ms. Hicks and Mr. McEntee, along with Dan Scavino, the president’s social media guru who was promoted this week to deputy chief of staff for communications, provide Mr. Trump with a link to the better old days. The three are the ones outside advisers get in touch with to find out if it’s a good time to reach the president or pass on a message.

“They have been really confined and figuratively imprisoned,” Matthew Dallek, a political historian at George Washington University, said about presidents who have kept close to the White House in times of crisis.

While many officials have been encouraged to work remotely and the Old Executive Office Building is empty, the West Wing’s tight quarters are still packed. Mr. Pence and his top aides, usually stationed across the street, are working exclusively from the White House, along with most of the senior aides, who dine from the takeout mess while the in-house dining room remains closed. Few aides wear masks except for Matthew Pottinger, the deputy national security adviser, and some of his staff.

The Day Ends as It Began

As soon as he gets to the Oval Office, the president often receives his daily intelligence briefing, and Mr. Pence sometimes joins him. Then there are meetings with his national security team or economic advisers.

Throughout the day, Mr. Trump calls governors, will have lunch with cabinet secretaries and pores over newspapers, which he treats like official briefing books and reads primarily in paper clippings that aides bring to him. He calls aides about stories he sees, either to order them to get a world leader on the phone or to ask questions about something he has read.

Many friends said they were less likely to call Mr. Trump’s cellphone, assuming he does not want to hear their advice. Those who do reach him said phone calls have grown more clipped: Conversations that used to last 20 minutes now wrap up in three.

Mr. Trump will still take calls from Brad Parscale, his campaign manager, on the latest on polling data. The president will in turn call Mr. Meadows and Kellyanne Conway about key congressional races.

The president’s aides have slowly lined up more opportunities to keep him engaged. Last week, a small group of coronavirus survivors were led into the White House, and Mr. Trump took one of them to see the White House physician. Then Mr. Trump hosted a celebration of America’s truckers on the South Lawn.

After he is done watching the end of the daily White House briefing — which is held seven days a week and sometimes goes as late as 8 p.m. — Mr. Trump watches television in his private dining room off the Oval Office. Assorted aides who are still around will join him to rehash the day and offer their assessments on the briefings. Comfort food — including French fries and Diet Coke — is readily available.

Lately, aides say, his mood has started to brighten as his administration moves to open the economy. His new line, both in public and in private, is that there is reason to be optimistic.

“And at the end of that tunnel, we see light,” Mr. Trump said in the Rose Garden last week.

If he is not staying late in the West Wing, Mr. Trump occasionally has dinner with his wife, Melania Trump, and their son, Barron, who recently celebrated his 14th birthday at home.

By the end of the day, Mr. Trump turns back to his constant companion, television. Upstairs in the White House private quarters — often in his own bedroom or in a nearby den — he flicks from channel to channel, reviewing his performance.