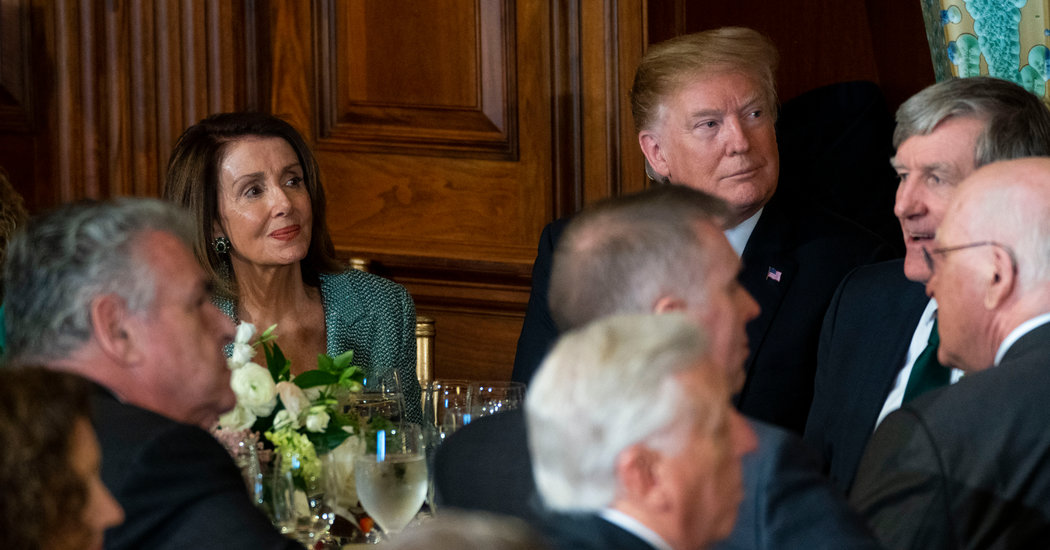 In rejecting Ms. Pelosi’s invitation, Mr. Trump becomes the first president to miss the event since George W. Bush when he was on the verge of war with Iraq in 2003. But Mr. Trump’s aides made no effort to disguise the reason behind the decision, openly attributing it to the president’s unhappiness with the speaker, who led the drive that resulted in his impeachment in the House in December.

“Since the speaker has chosen to tear this nation apart with her actions and her rhetoric, the president will not participate in moments where she so often chooses to drive discord and disunity,” Judd Deere, a White House spokesman, said in a statement.

Instead, Mr. Trump will host Prime Minister Leo Varadkar of Ireland at the White House on Thursday for his own celebration of the holiday and friendship.

“The relationship between our two countries has never been stronger, and the president looks forward to welcoming the prime minister of Ireland for the annual Shamrock Bowl presentation,” Mr. Deere said.

Ms. Pelosi’s office fired back soon after. “There has never been stronger support in the Congress and in the country for the U.S.-Ireland bilateral relationship,” said Drew Hammill, her deputy chief of staff. “One would think that the White House could set petty, partisan politics aside for this historic occasion.”

The refusal to attend, first reported by Politico’s Playbook newsletter, underscored the president’s deep anger toward the speaker since she authorized the inquiry that led to his impeachment on charges of abuse of power and obstruction of Congress largely along party lines. When he arrived at the Capitol for his State of the Union address last month, near the end of his Senate trial, Mr. Trump refused to shake Ms. Pelosi’s hand, as was customary, and she ripped up her copy of his speech after he delivered it.

The day after the Senate acquitted him, also largely along party lines, Mr. Trump attended the National Prayer Breakfast with Ms. Pelosi. As she sat only a few feet away, he made a barely veiled attack on her faith, branding her as hypocritical for saying she prays for him. He told the clerics in the audience that he did not “like people who say, ‘I pray for you,’ when they know that’s not so.”

The St. Patrick’s Day lunch traces its history to 1983, when President Ronald Reagan, a Republican, and Speaker Thomas P. O’Neill, a Democrat from Massachusetts, both of Irish descent, established the tradition. It became an annual affair in 1987, and only four times since then have presidents missed it. The prime minister of Ireland, called the taoiseach, typically flies to Washington for the event.

On Friday, Mr. Trump finally filled the post of special envoy to Northern Ireland, which had been vacant since 2017, giving it to Mick Mulvaney as a landing pad as he was forced out as acting White House chief of staff.

Nonetheless, Mr. Varadkar welcomed the appointment as a sign of seriousness by the president after more than three years in office.

“Really pleased Mick Mulvaney has been appointed as US special envoy to Northern Ireland,” Mr. Varadkar wrote on Twitter. “He has been a good friend to Ireland and understands all the key issues in detail. He’ll have a hotline to President Trump when it comes to issues affecting Ireland, north and south.”