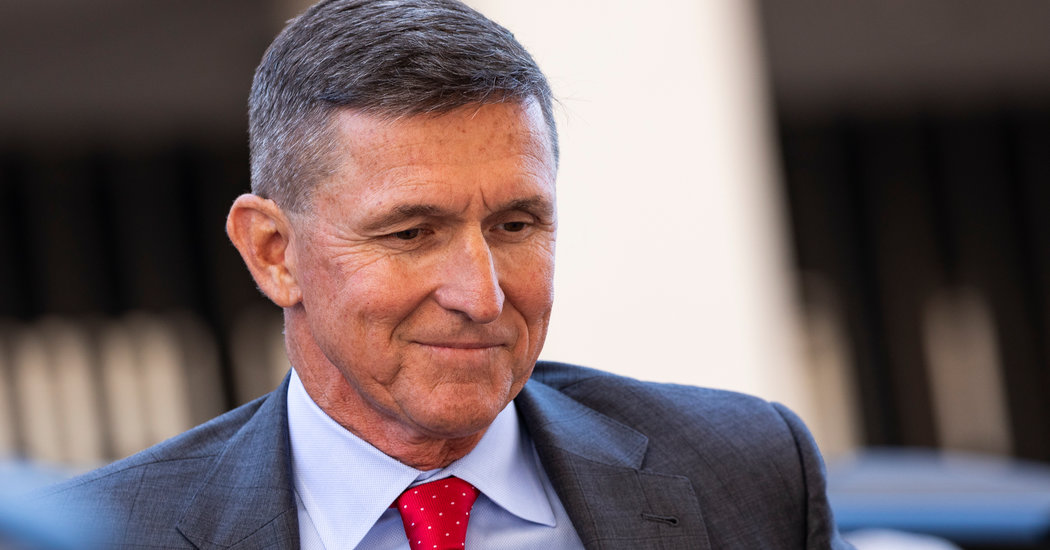 WASHINGTON — President Trump revived his attacks on law enforcement on Thursday as a pair of former advisers, Roger J. Stone Jr. and Michael T. Flynn, renewed their fights against their criminal convictions.

Mr. Flynn’s lawyers accused the F.B.I. and the Justice Department of misconduct, citing newly unsealed documents showing that F.B.I. officials were about to close the investigation into their client in early 2017 until new evidence prompted them to keep it open.

Mr. Stone appealed his conviction to the federal court of appeals for the District of Columbia. He was sentenced in February to 40 months in prison for obstructing a congressional investigation, lying to federal investigators and tampering with a witness.

Mr. Trump wrote and retweeted a flurry of messages sympathetic to Mr. Flynn on Thursday, saying of the investigation, “What happened to General Michael Flynn, a war hero, should never be allowed to happen to a citizen of the United States again!

At a session later with reporters at the White House, Mr. Trump held out the possibility of pardoning Mr. Flynn but suggested he might not need to because the general would be exonerated through the judicial system. “It’s just disgraceful,” the president said. “I guess we’ll get to that maybe someday or maybe not. Hopefully, we won’t have to get there.”

In response to a question, Mr. Trump said he would think about rehiring Mr. Flynn. “I would certainly consider it, yeah, I would,” he said. “I think he’s a fine man.”

He did not address the fact that he himself fired Mr. Flynn in 2017 for lying to Vice President Mike Pence or explain whether he now thinks he was wrong to do so. “I had to fire General Flynn because he lied to the Vice President and the FBI,” Mr. Trump wrote on Twitter in December 2017 after Mr. Flynn pleaded guilty to lying to federal investigators.

The documents added new details about the long-running case against Mr. Flynn, who pleaded guilty twice to lying to the F.B.I. about his discussions during the presidential transition in late 2016 with the Russian ambassador to the United States at the time, Sergey I. Kislyak.

Mr. Flynn was among the four Trump advisers the F.B.I. had begun scrutinizing in 2016 as part of its investigation into whether the Trump campaign had conspired with Russia’s election interference operation.

By early January 2017, F.B.I. agents were on the verge of ending the investigation into Mr. Flynn for lack of evidence, the documents showed, and they planned to close it without questioning Mr. Flynn.

But a separate intelligence review revealed that Mr. Flynn had privately advised Mr. Kislyak days earlier that Russia should avoid retaliating against sanctions imposed by the Obama administration as punishment for Russia’s election interference. The phone calls prompted a flurry of activity among national security officials, including high-level discussions among law enforcement and intelligence officials.

The documents made clear that F.B.I. agents wanted to keep the inquiry into Mr. Flynn open based on the new information, and eventually the bureau decided to interview Mr. Flynn after Mr. Pence denied on national television that Mr. Flynn had discussed sanctions with Mr. Kislyak. Classified transcripts of their calls, obtained from a wiretap of Mr. Kislyak, proved otherwise, and agents began to suspect that Mr. Flynn had lied to the vice president.

Law enforcement officials warned White House aides at the time that because the Russian government knew of the nature of the Flynn-Kislyak discussions, they posed a blackmail risk to Mr. Flynn.

The F.B.I. interviewed Mr. Flynn on Jan. 24, and he lied repeatedly even after agents gave him “multiple opportunities to correct his false statements by revisiting key questions,” prosecutors have said.

The newly disclosed materials also include text messages between the former F.B.I. officials Lisa Page and Peter Strzok talking about editing notes on the questioning of Mr. Flynn. His lawyers said they were further evidence that the F.B.I. doctored the interview notes known as a 302, a claim that the judge overseeing Mr. Flynn’s case, Emmet G. Sullivan of the United States District Court for the District of Columbia, has previously rejected.

Asked on Thursday about the new documents, Mr. Pence told reporters during a trip to Indiana that he was “deeply troubled by the revelations” but declined to say whether Mr. Flynn should have been fired.

“I know what General Flynn told me, and I’m more inclined to believe it was unintentional than ever before,” Mr. Pence said.

Despite claims by Mr. Flynn’s supporters that the new information exonerates him, Judge Sullivan will ultimately decide whether that is true.

Judge Sullivan had unsealed documents a day earlier that revealed notes that a top F.B.I. counterintelligence agent wrote on the day Mr. Flynn was interviewed. “What’s our goal? Truth/admission or to get him to lie, so we can prosecute him or get him fired?” the official wrote, apparently assessing the case.

Mr. Flynn’s lawyers called the notes proof that their client was “deliberately set up and framed by corrupt agents at the top of the F.B.I.”

Mr. Flynn himself has remained mostly quiet throughout the case, while Mr. Stone has repeatedly expressed hope that Mr. Trump will pardon him. But so far the president has merely expressed sympathy and anger about his plight.

On Thursday morning, Mr. Trump said on Twitter: “Does anybody really believe that Roger Stone, a man whose house was raided early in the morning by 29 gun toting FBI Agents (with Fake News @CNN closely in toe), was treated fairly. How about the jury forewoman with her unannounced hatred & bias. Same scammers as General Flynn!”

The president’s message echoed complaints from Mr. Stone, who argued that he deserved a new trial because of juror misconduct. Earlier this month, the federal judge who oversaw his case rejected that argument and ordered him to report to prison no earlier than Thursday.

Typically, defendants who have been found guilty are not allowed to delay serving sentences while their appeals are heard — unless they raise a substantial issue of fact or law that is likely to result in a new trial, a reversal of a conviction or a sentence that does not include prison time.

However, the Bureau of Prisons has been allowing people to delay serving their sentences to cut down on the spread of Covid-19 in prisons.