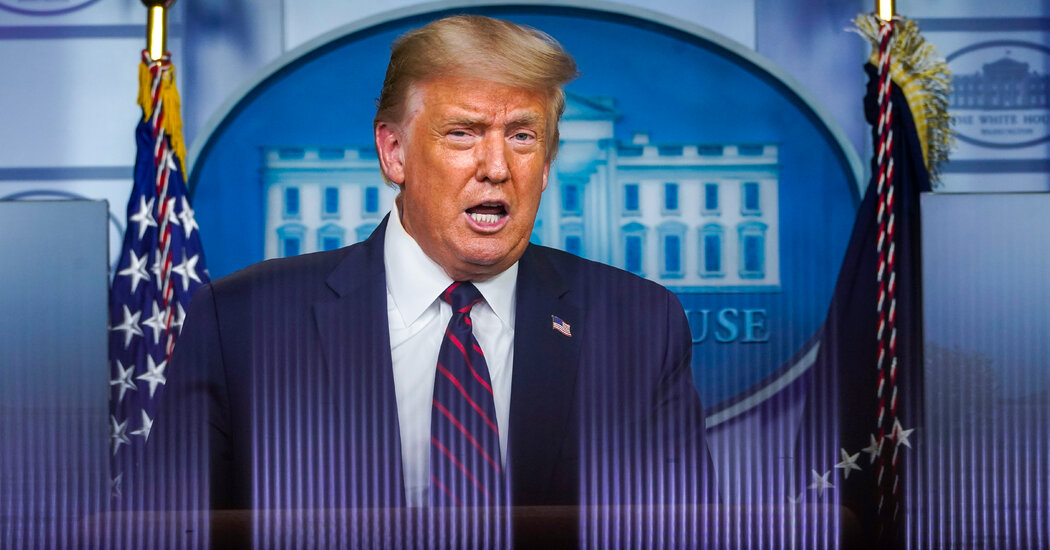 President Trump, in a news conference on Tuesday, cited a slew of statistics to argue that “our strong mitigation efforts are working very well.”

“Thanks to substantial improvements in treatment and the knowledge we have gained about the disease itself, the recent rise in cases has not been accompanied by a significant increase in deaths. Fatalities nationwide are at roughly half the level of the April peak.”

This is misleading. Mr. Trump is right that the number of deaths, currently averaging over 1,000 a day, remain well below the 2,200 deaths a day seen in April, according to a New York Times database. But fatalities nationwide have increased and are double that of the low in July, when daily deaths hovered below 500.

“A lot of our numbers were based on the New York — had a very tough time, as you know — New York, New Jersey, that area. And when you take them out, just as an example, take a look at Florida relative to New York. That’s not to say anything wrong with New York, it’s just a very tough place. People are close together, it’s crowded, it’s not easy. But when you take that out, our numbers are among the lowest and even with them in — I will get back to you — but we have among the lowest numbers. They’ve done a fantastic job.”

False. Mr. Trump was responding to a reporter who accurately pointed out that the United States has one of the highest rates of deaths per 100,000 population in the world. But he is wrong that omitting New York and New Jersey would place the United States “among the lowest.”

The entire country’s rate of 47.5 deaths per 100,000 is currently the fourth highest among the 20 countries most affected by the coronavirus, and the 10th highest among more than 160 countries, according to data collected by Johns Hopkins University.

As of Tuesday evening, New York and New Jersey combined account for 48,268 of the 157,119 deaths nationwide, and 28.3 million of the total population of 328.2 million. Omitting the two states would result in a rate of 36.3 deaths per 100,000 — placing the United States at sixth highest among the most infected, and 14th in the world.

“We are testing at a level that no country in the world — and I’ve spoken to the leaders of the world and they’ll ask me about it — no country in the world thought that it’s even believable that we’re able to test so much, 61 million versus, you know, most countries don’t even test. You know when they test? When somebody’s feeling badly, if somebody’s feeling badly, if they’re symptomatic, that’s when they test. And that’s a big difference. With us, we go around and looking, because if we find spots, we find hot spots. One problem is from the standpoint of the media, we end up with far more cases than we would normally show.”

False. Mr. Trump compared the total number of tests conducted to that of Australia, Canada, France and Mexico. While the United States has conducted more tests than those countries or any other country, Mr. Trump was once again wrong that testing is driving the increase in number of cases.

According to Johns Hopkins University, the positivity rate is “the most reliable way to determine if a government is testing enough.” The United States currently has a daily positive rate of 7.13 percent, higher than that of Australia’s 0.47 percent and Canada’s 3.82 percent.

He was also wrong that other countries test only those with symptoms. Like the United States, Australia and Canada have open public testing available to asymptomatic people. It should also be noted that places like New Zealand, South Korea, and Taiwan also controlled their outbreaks with far lower testing figures than the United States has.

Curious about the accuracy of a claim? Email [email protected]