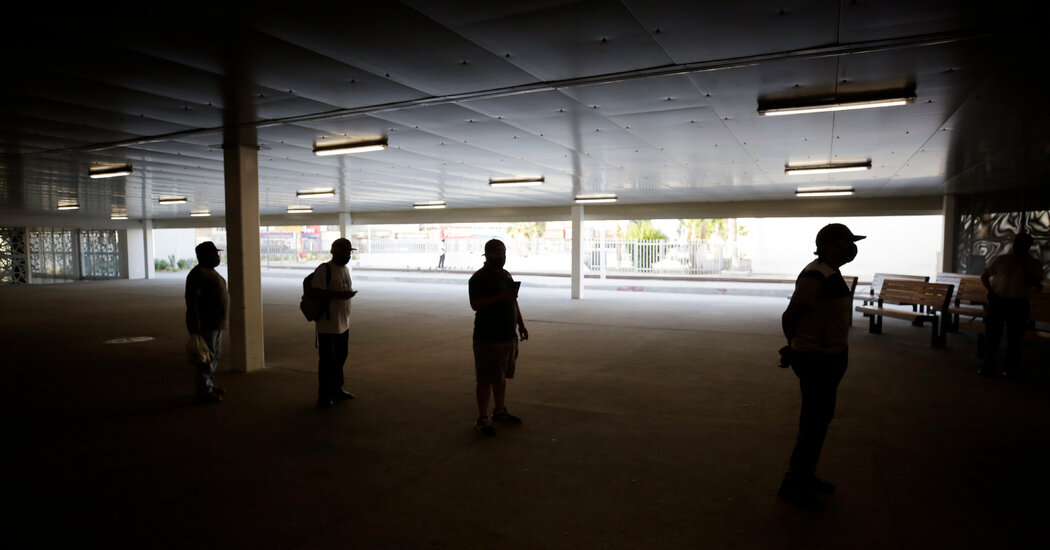 WASHINGTON — President Trump is considering new immigration rules that would allow border officials to temporarily block an American citizen or legal permanent resident from returning to the United States from abroad if the authorities have reason to believe the person may be infected with the coronavirus.

In recent months, Mr. Trump has imposed sweeping rules that ban entry by foreigners into the United States, citing the risk of allowing the virus to spread from hot spots abroad. But those rules have exempted two categories of people trying to return: American citizens and foreigners who have already established legal residence.

Now, a draft regulation would modify that effort by expanding the government’s power to prevent entry by citizens and legal residents in individual, limited circumstances. Federal agencies have been asked to submit feedback on the proposal to the White House by Tuesday, though it is unclear when it might be approved or announced.

Under the proposal, which relies on existing legal authorities of the Centers for Disease Control and Prevention to protect the country, the government could block a citizen or legal resident from crossing the border into the United States if an official “reasonably believes that the individual either may have been exposed to or is infected with the communicable disease.”

The draft, parts of which were obtained by The New York Times, explicitly says that any order blocking citizens and legal permanent residents must “include appropriate protections to ensure that no constitutional rights are infringed.” And it says that citizens and legal residents cannot be blocked as an entire class of people.

The documents appear not to detail how long a citizen or a legal resident would be required to remain outside the United States.

“C.D.C. expects that any prohibition on the introduction of U.S. citizens or L.P.R.s from abroad would apply only in the rarest of circumstances,” the draft says, referring to legal permanent residents, “when required in the interest of public health, and be limited in duration.”

Still, if Mr. Trump approves the change, it would be an escalation of his administration’s longstanding attempts to seal the border against what he considers to be threats, using the existence of the coronavirus pandemic as a justification for taking actions that would have been seen as draconian in other contexts.

Officials said there were no current rules that would allow American citizens and legal residents to be prohibited from returning to the United States for a period of time because of concerns about a communicable disease.

Since January, Mr. Trump has repeatedly sought to bar foreigners from spreading the virus in the United States. He put limits on travel from China, most of Europe and other hot spots around the world. But all of those efforts exempted American citizens and those with permanent legal status to live in the United States, officials said.

The government does already have the authority to conduct extra health screenings of American citizens and potentially impose quarantines if an American citizen returns from a hot zone. And immigration officials do have broad authority to deny entry to people based on national security issues.

The new rule appears to apply to all points of entry into the United States, including at airports and along both the northern and the southern borders. In particular, the draft could affect the border with Mexico, where many American citizens and legal residents cross back and forth frequently.

The rule notes the prevalence of the coronavirus in Mexico as evidence of the need for the modified rule, citing the recent death of the health minister in the border state of Chihuahua, who the order says died of Covid-19, the disease caused by the coronavirus, after a two-week hospitalization.

“As noted, the stress that Covid-19 has placed on the Mexican health care system has driven U.S. citizens, L.P.R.s and others from Mexico into the United States to seek care,” the draft of the regulation says.

The draft of the proposed regulation goes to great lengths to assert the legality of blocking citizens and legal residents based on concerns about the threat of disease entering the United States. But legal experts questioned the constitutionality of such a prohibition, even if temporary.

“Barring American citizens from the United States is unconstitutional,” said Omar Jadwat, the director of the American Civil Liberties Union’s Immigrants’ Rights Project. “The Trump administration has rolled out one border ban after another — most recently on children and asylum seekers — using Covid-19 as an excuse, while failing abysmally to get the virus under control in the United States. The rumored order would be another grave error in a year that has already seen far too many.”

A previous lawsuit challenged the government’s ability to use public health laws to seal the border. Carl J. Nichols, a judge recently appointed to the federal bench by Mr. Trump, ruled against the government in that case — in part because of the potential implications for American citizens if the practice of blocking border crossings were allowed to continue.

But the practice remains in place because the government then agreed not to expel the migrant children who were named in the case, which rendered it moot.

In that case, J.B.B.C. v. Wolf, Judge Nichols, of the United States District Court for the District of Columbia, repeatedly asked a government lawyer whether the administration believed it had the legal right to bar an American citizen from entering in the first place.

The judge asked about a hypothetical Ebola outbreak in which the C.D.C. was concerned about people entering from Mexico. “The C.D.C., I take it, in your view, would have the power both to prohibit all entry from Mexico to the United States by anyone,” including citizens, the judge said.

“Yes, your honor,” the lawyer replied. “It says persons, and that would include both citizens and noncitizens.” The judge replied that was a “remarkably broad power.”

The possible change to the regulation is part of a pattern in recent months in which the Trump administration has sought to more vigorously clamp down on entry into the country — not only from illegal immigrants, but from legal ones as well.

Stephen Miller, the architect of the president’s assault on immigration, has aggressively pushed for years to dial back the flow of migration. Some of his efforts have succeeded, including a program to return asylum seekers to Mexico to await processing and new rules on those seeking green cards to live and work in the United States legally.

But other efforts by Mr. Miller and the administration have been blocked by legal action. Since the pandemic began, they have moved aggressively to impose some of those same restrictions in the name of protecting Americans from the spread of the virus.

In addition to citing health concerns to suspend the nation’s asylum program, the president ordered a temporary halt to the issuance of green cards and has suspended the issuance of many work visas aimed at allowing foreigners to work legally in the United States.

Immigrant rights organizations have criticized the recent efforts, saying that they fear the Trump administration will not lift the severe restrictions on immigration once the threat from the pandemic is over.