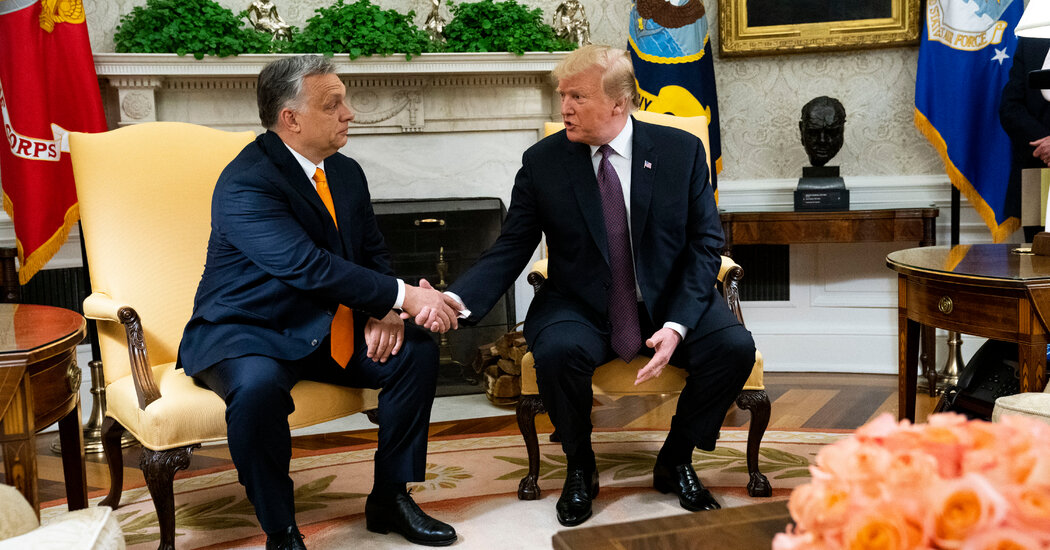 Democracy in Hungary has been backsliding under Mr. Orban, whose efforts to consolidate power have caused consternation in the European Union.

Mr. Orban and his party have steadily consolidated power in Hungary by weakening the country’s independent and democratic institutions — rewriting election laws to favor his Fidesz party, changing school textbooks, curbing press freedoms, overhauling the Constitution and changing the composition of the judiciary.

The actions have caused consternation in the European Union, to which Hungary belongs, but also made Mr. Orban something of a cause célèbre in conservative American political circles, following years of an aggressive influence operation to bolster his image in the United States.

Last fall, Tucker Carlson, the top-rated Fox News host, broadcast from Budapest for a week, calling the nation a place “with a lot of lessons for the rest of us.” Former Vice President Mike Pence visited Hungary last year for a conference on conservative values. And the American Conservative Union has been promoting plans for a gathering there, dubbed #CPACHungary, later this year.

Mr. Orban was an early supporter of Mr. Trump, endorsing him in the summer of 2016. After he won, Mr. Trump granted Mr. Orban a meeting in the Oval Office in 2019. The Hungarian leader had been denied such an audience since 1998.

After that meeting, Mr. Trump said Mr. Orban was “probably, like me, a little bit controversial, but that’s OK.”

Mr. Orban again publicly backed Mr. Trump in 2020. Now, Mr. Trump is doing the same for Mr. Orban ahead of the Hungarian elections, scheduled for this spring.

In his endorsement on Monday, Mr. Trump hailed Mr. Orban as a “strong leader” who has “done a powerful and wonderful job in protecting Hungary, stopping illegal immigration, creating jobs, trade, and should be allowed to continue to do so in the upcoming election.”

It is Mr. Trump’s second endorsement of a foreign leader since leaving the White House. He endorsed Jair Bolsonaro, the president of Brazil, last year.