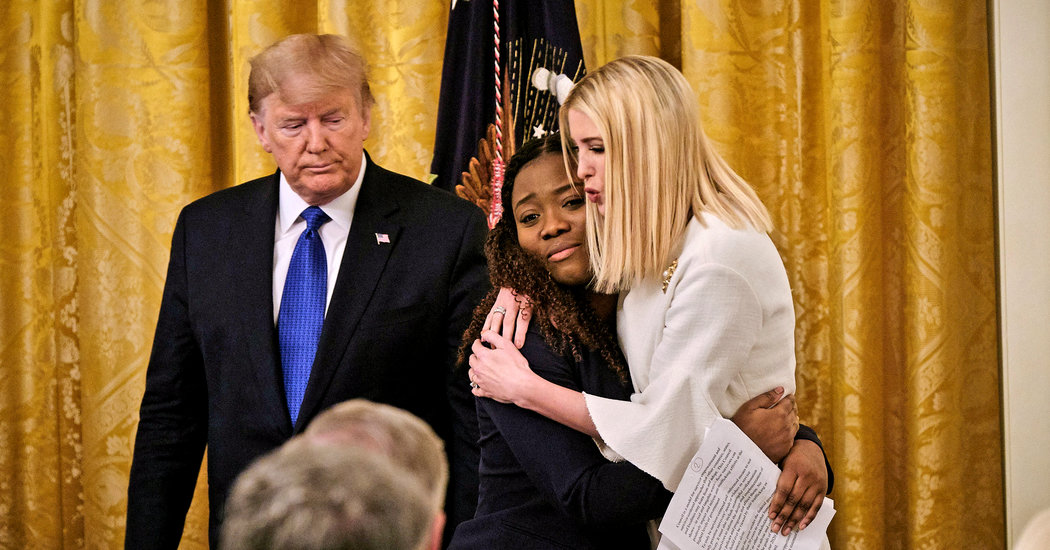 Few people on earth are so exploited as children trafficked into the sex trade. And now they are being exploited again, by President Trump.

I’ve been reporting about human trafficking all over the world since the 1990s, so part of me is thrilled that a president is highlighting this issue. Ivanka Trump has made it a signature issue, and she organized the White House event. The president used the occasion to announce a new White House position to oversee antitrafficking efforts, and all this high-level attention could be very helpful.

Yet it’s increasingly clear that this is less about protecting children and more about exalting Trump, whose administration is actually prosecuting fewer traffickers and making it harder for some trafficking survivors to get help. As a result, major antitrafficking organizations boycotted the White House session.

“Over the last three years we have watched with horror as the administration has dismantled protections for trafficking survivors,” said Martina Vandenberg, the president of the Human Trafficking Legal Center in Washington, who stayed away.

“Using human trafficking for pernicious political purposes is new,” she added. “It is a Trump administration invention.”

The Human Trafficking Legal Center reports only 146 federal trafficking indictments in 2019, down from 204 in the last year of the Obama administration.

A whistle-blower complaint alleges the administration diverted antitrafficking money from well-respected nonprofits to less-effective organizations like “Hookers for Jesus.”

Foreign women and children who have been trafficked into America’s sex trade are eligible for a special visa, the T visa, under a program with bipartisan support, but the administration in 2019 approved only 500 T visas, down from 748 in 2016, and wait times are now three or four times longer. The administration now threatens to deport trafficking survivors who are denied T visas, so applications have fallen.

The U.S. traditionally pushed other countries to crack down on human traffickers and toughen their laws on trafficking. But in 2018, only five countries changed their laws, down from 25 in 2016. Many more tough laws are still needed.

The administration has also made no attempt to address underlying causes of trafficking — such as child poverty. America’s foster care system, for example, is dysfunctional and amounts to a pipeline for traffickers. The National Academies of Sciences, Engineering and Medicine last year offered an important road map to cut American child poverty by half — a step that would reduce trafficking — but the administration has ignored it.

“We are losing the ‘war on trafficking,’ mostly because we have made this all about prosecutions,” Vandenberg said. “We are doing almost no prevention.”

Rachel Lloyd, who was trafficked into the sex trade as a teenager, now runs an excellent program in New York City called the Girls Educational and Mentoring Service, or GEMS, which helps girls who have been trafficked. Lloyd said that when she realized that the administration was only engaged in a P.R. effort, she turned down a position on an administration advisory panel and also declined a $10,000 donation from Ivanka Trump for GEMS.

“Why would we give them cover and validation?” asked Lloyd, whose memoir, “Girls Like Us,” is one of the best books on trafficking.

Human trafficking is one of the pre-eminent moral challenges of our time. The International Labor Organization estimates that worldwide, some 10 million children exist in forms of modern slavery. In Cambodia, I once saw terrified young girls being sold for their virginity; in Pakistan, I saw a brothel owner determined to kill a girl who had escaped.

Trump’s exploitation of trafficking victims for his own purposes is particularly sad because this is a rare issue where Democrats and Republicans have worked productively together: Evangelical Christians and liberal feminists both have done heroic work for 20 years. Representative Chris Smith, a Republican from New Jersey, has done outstanding work on this issue, as has Gloria Steinem.

It’s useful for a president to speak up about trafficking, to keep the issue on the agenda. But Trump sensationalizes in lurid terms: “Women are tied up, they’re bound, duct tape put around their faces,” he has said. It’s usually more complicated than that, and survivors are irritated that Trump cites trafficking as a reason to build his border wall.

“This is an issue that doesn’t need overdramatizing,” said Lloyd, who was nearly killed by her pimp. “It’s bad enough. You don’t need to make it worse.”

Shaquana Blount, who was trafficked at age 14 in New York and is now 30, put it this way: “The president’s sensationalization of sex trafficking is a spit in the face to myself and many survivors, as his narrative does not fit ours. It is his own.”