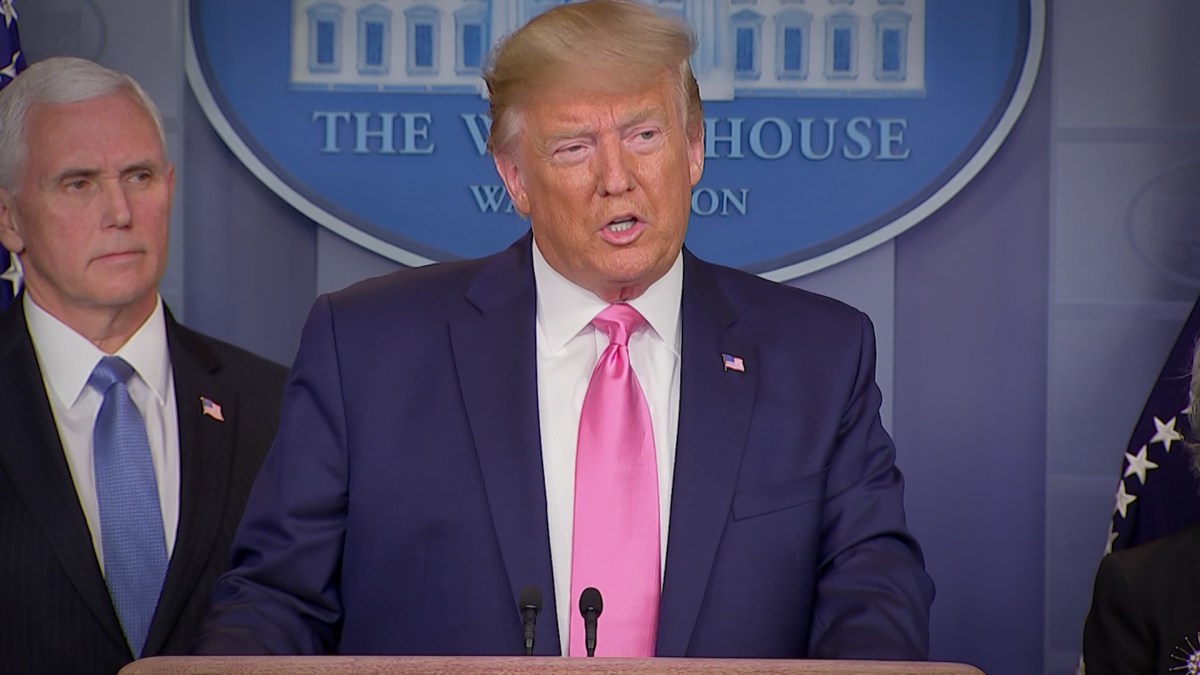 President Donald Trump faces a critical personal challenge in grappling with the new coronavirus outbreak: Asking Americans to believe him after he and some of his top advisers have contradicted federal scientists in playing down the threat.

Keenly aware of the stakes not just for public health but also his credibility, Trump conducted a lengthy press conference Wednesday evening aimed at reassuring everyone that he has the crisis well in hand.

Trump surrounded himself with his administration’s top health experts. And he encouraged Americans to be prepared for the virus’ potential spread.

In testimony before the Senate Appropriations Committee on February 25, 2020, Health and Human Services Secretary Alex Azar said “while the immediate risk to individual members of the American public remains low,” the transmission outside the U.S. in a number of countries is “deeply concerning.”

But he continued to minimize the risk, saying the outbreak “may get a little bigger; it may not get bigger at all.” And he continued to distance himself from the stated opinion of public health officials that it’s inevitable the virus will spread within the United States.

As businesses, schools and people in general think about preparing, the X-factor may be an unpredictable president who has clashed repeatedly with scientists in his own administration and tends to see any crisis through the lens of his own reelection chances.

“I don’t think it’s inevitable,” Trump said at the news conference, where he announced Vice President Mike Pence would lead the administration’s response to the outbreak. “I think it has a chance that it could get worse. There is a chance you can get fairly substantially worse. But nothing’s inevitable.”

The Centers for Disease Control and Prevention is warning Americans to begin preparing for a likely outbreak of coronavirus in the United States, saying that both a “community spread,” as well as disruption to work, school and life were likely in the event of a domestic outbreak.

He also said he had recently learned that thousands die from the flu each year, contrasting that to the coronavirus.

After two days of the stock market tumbling, Trump took to Twitter Wednesday morning to blame the media and Democrats for causing undue alarm and harming American financial markets.

He singled out MSNBC and CNN for “doing everything possible to make the Caronavirus look as bad as possible, including panicking markets, if possible,” and added that “incompetent Do Nothing Democrat comrades are all talk, no action.”

He blamed part of this week’s stock market slide on people’s reaction to Tuesday night’s Democratic debate and the possibility one of those candidates might replace him. And Trump acknowledged that the outbreak could “have an impact on GDP” but insisted that the U.S. economy is still
“doing great.”

The setting for Trump’s evening press conference — the White House press briefing room — was meant to offer a sense of calm and assurance by the president. It was only the second time in his presidency that Trump had spoken from the podium in that room, and aides acknowledged he was trying to underscore that he has the situation under control and understands the gravity.

In advance, Trump played down the mortality rate for a pathogen that has been confirmed to have killed 2,700 people globally. His top economic adviser, Larry Kudlow, echoed Trump’s outlook, saying Tuesday that the U.S. had “contained” the threat of a domestic outbreak.

The virus, which causes the COVID-19 illness, has infected more than 79,000 people globally, and caused more than 2,600 deaths, most of them in China.

Trump’s and Kudlow’s comments were at odds with warnings from Centers for Disease Control and Prevention officials who said American communities need to prepare now for when the disease starts spreading domestically. So far, there have been just 60 confirmed cases in the U.S.

“The messaging by the White House is unhelpful,” said Lawrence Gostin, a professor of global health law at Georgetown University. “What the White House is doing is conveying a sense of overconfidence. … Of course, we do want to maintain calm with the public, but it flies in the face of facts.”

During his 36-hour visit to India, Trump received briefings from staff and periodically checked the impact on Wall Street, tweeting at all hours to try to reassure Americans and the markets about the spread of the virus.

Trump expressed deep concern to aides about the effect on the markets, according to White House officials and Republicans close to the West Wing. Trump has tied his fortunes to Wall Street more closely than any of his recent predecessors and has made a strong economy his No. 1 argument for reelection.

As the media coverage of the virus has increased, Trump has grown concerned that even fears of an outbreak would stagger Wall Street, leading him to wonder aloud if Health and Human Services Secretary Alex Azar was the right person to lead the administration’s response, the officials said.

Since the start of the crisis, Trump has been reluctant to blame China, where the virus originated, for fear of upsetting President Xi Jinping or damaging ongoing trade talks.

But he is also fearful he could be accused of being unresponsive to the crisis. At the urging of a number of his internal and outside advisers, he directed the White House to adopt a more public presence, leading to a briefing by officials and emails to the press stressing the administration’s response.

“Americans want to see their president taking charge and showing leadership, and that is exactly what President Trump is doing,” said Trump campaign spokeswoman Kayleigh McEnany.

Privately, aides said concerns have spiked in recent days inside the Trump reelection campaign. Republicans close to the White House are keenly aware of the political implications of a pandemic scare. In 2014, the GOP aggressively criticized the Obama administration’s handling of the Ebola epidemic, which it later credited with helping the party seize back the majority in the Senate.

The most pressing concern, aides said, is not the possibility of widespread outbreak in the U.S. — Trump’s aides do believe existing monitoring and restrictions are working — but the downstream effects of the virus on the global economy and public sentiment.

The virus has already shut Chinese factories that are part of the U.S. supply chain. Mark Zandi, an economist at Moody’s Analytics, estimated Wednesday that U.S. growth could slow to 1.7% this year — roughly the same level as in 2016. He said the situation could become worse if a pandemic emerges.

“The U.S. economy is more insulated from the impact of the virus, but it is not immune, and it too would likely suffer a downturn in this scenario,” Zandi said.

Trump moved swiftly to severely curtail most travel to China a month ago, a move administration officials believe slowed the spread of the virus to the U.S., even if it drew criticism for being too extreme in the moment.

Secretary of Health and Human Services Alex Azar says the immediate risk of COVID-19 to Americans is low but we need to be ready for that to change quickly.

Until now, federal health authorities have been preparing for the coronavirus’ arrival in the U.S. with little if any White House interference. They’re following the playbook: pandemic preparedness plans that were put into place in anticipation of another flu pandemic, but will work for any respiratory-borne disease.

Part of those plans call for educating the public on what to expect if the virus begins spreading in U.S. communities, such as school closures or calls for people to telework.

One of the lessons learned in prior crises is not to offer false assurances when scientists have questions about the illness.

As Trump plays down the threat of an outbreak, his past attacks on government scientists on everything from hurricane forecasts to climate change and his reputation for straining the truth all factor into the credibility of his message.

The flap over Trump’s off-base comments about Hurricane Dorian last fall — when he went so far as to display a weather map that had been altered with a black marker to extend the hurricane’s possible path — demonstrated the pitfalls when a president veers from the message provided by government scientists and career professionals.

Trump, who pilloried President Barack Obama over his response to the Ebola epidemic, now finds himself having to fend off a wave of criticism from Democratic presidential rivals who claim he’s discounted science and has inadequate response plans.

China’s Consulate General in Karachi on Thursday reiterated his country’s efforts against COVID-19 and speculated that the outbreak may be over as soon as March.

At Tuesday’s presidential debate, Mike Bloomberg claimed “there’s nobody here to figure out what the hell we should be doing.” Sen. Amy Klobuchar criticized Trump for trying to cut back funding of the CDC and the National Institutes of Health.

Trump’s budgets have proposed cuts to public health, only to be overruled by Congress, where there’s strong bipartisan support for agencies like the CDC and NIH. Instead, financing has increased.