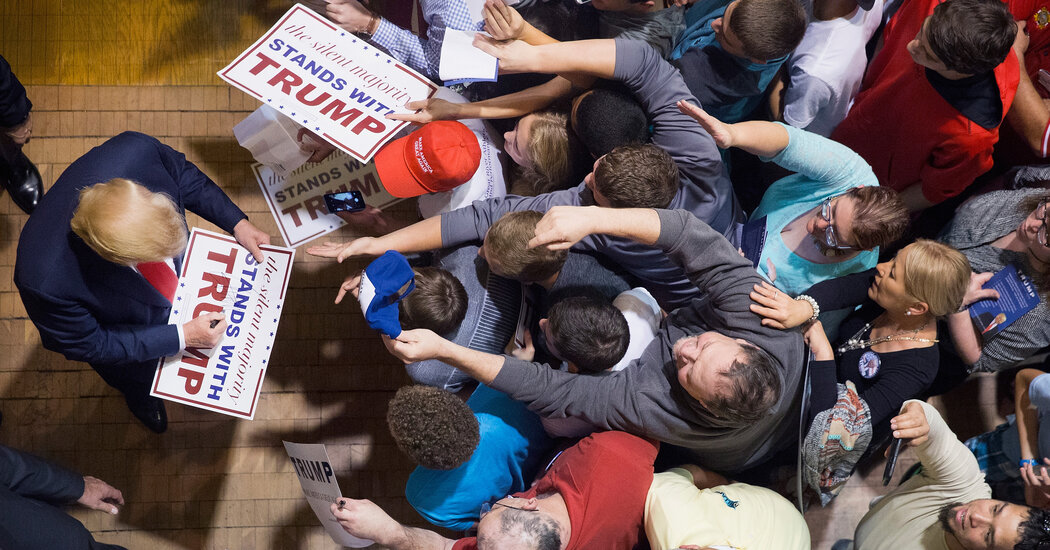 WASHINGTON — Sitting in the back of his limousine after an appearance on “The Tonight Show,” Donald Trump was explaining to me why he never had much use for Jimmy Carter.

“Jimmy Carter used to get off Air Force One carrying his luggage,” Mr. Trump said, smirking. “I don’t want a president carrying his luggage.” It sends the wrong message, Mr. Trump believed, for a president to act like some kind of humble servant, an everyday slob. A commander in chief should be imperial and, yes, superior. “I don’t want someone who is going to come off carrying a large bag of underwear,” Mr. Trump said.

It was late in 2015, Mr. Trump was the unlikely front-runner for the Republican presidential nomination, and I was following him around for a profile I was working on. I was struck by how someone with such an obsessively cultivated image as a gold-plated know-it-all could appeal to a base made up heavily of white blue-collar workers, union-affiliated and non-college-educated voters — a stark departure from Republican coalitions of the recent past.

Even the most aristocratic of American presidents had at least pretended to share the folksy tastes of “ordinary” voters — George H.W. Bush and his pork rinds, for instance. It might have been unconvincing, but at least it seemed polite.

As Mr. Trump’s limo inched away from 30 Rockefeller Plaza, Hope Hicks, his not-yet-famous communications director, pointed at a group of fans running up Sixth Avenue in pursuit. “Look at these people,” Mr. Trump said. “It’s literally a little bit sad.”

I’ve thought about this episode a lot during Mr. Trump’s tumultuous term in office and possibly imminent comeuppance at the polls.

It’s hard not to wonder how he really feels about his supporters, especially when the coronavirus-positive president began walking maskless around the White House.

He has been, to say the least, careless about placing his most devoted people at risk. These include his own top White House and campaign aides, residence staff members, Secret Service agents, Republican senators and campaign advisers, and possibly donors at a fund-raising luncheon in New Jersey and rallygoers in Minnesota (depending on when he first thought he might be contagious).

On Friday news broke that he was planning to hold a rally for hundreds this weekend on the White House lawn.

Several people who have dealt extensively with Mr. Trump have suggested that he takes a dubious, even disdainful view of his most loyal followers. He takes them for granted because he knows they would forgive him for anything: “I could stand in the middle of Fifth Avenue and shoot somebody and I wouldn’t lose any voters.”

“The people Trump despises most love him the most,” said Howard Stern, who hosted Mr. Trump on-air for years, in May. His voters, Mr. Stern said, are people he would not want in his hotels. “He’d be disgusted by them,” he said. “Go to Mar-a-Lago, see if there’s any people who look like you. I’m talking to you in the audience.”

In his recent memoir, the longtime Trump fixer Michael Cohen described the contempt with which his boss would speak about evangelical Christians, perhaps the president’s most durable corps of supporters. After a meeting with a group of pastors in 2011, Mr. Cohen says Mr. Trump asked him: “Can you believe this [expletive]?”

Until recently, it had been easy to consign the question of how Mr. Trump sees his supporters to the black hole of speculation about his true motivations, if anyone still bothers with that. In a broad political sense, Mr. Trump’s handling of the coronavirus has clearly driven away swarms of older voters, traditionally the Republican Party’s most bedrock constituency, who polls now show overwhelmingly support Joe Biden. As a general rule, saying that the coronavirus would “just disappear” or “go away” and that Mr. Trump himself feels 20 years younger after being treated for it is not going to play well with the demographic group — aged 65 and older — that accounts for roughly 80 percent of coronavirus deaths.

Mr. Biden has picked up on this message. Even before the president tested positive, Mr. Biden was pointing out how diligent the president always is in remaining physically apart from those who attend his rallies. “The next time he holds one, look closely,” Mr. Biden said during a visit to Manitowoc, Wis. “The folks who come are packed as tightly as they can be, risking disease, mostly without masks. But not Trump; he safely keeps his distance.”

Biden campaign sources say their candidate is absolutely targeting Trump-inclined voters by talking about how little he believes the president cares about them. Mr. Biden frequently brings up a recent article in The Atlantic, by Jeffrey Goldberg, that says President Trump has derided American combat troops as “losers” and “suckers.”

Mr. Trump denied making the remarks, though the allegations were later confirmed by The Washington Post, Fox News and other news outlets.

“It makes my blood boil,” Mr. Biden said last month in Tampa about the “losers” and “suckers” report. “The way he gets in front of a camera and crows about how much he’s done for our vets and then turns around and insults our service members and fallen heroes when the cameras are off.”

This has been another recurring theme of Mr. Biden’s: the notion that Mr. Trump is two-faced. He bathes in the adoration of his followers in public while voicing contempt for them in private. Mr. Biden has shared an anecdote from Olivia Troye, a former homeland security adviser to Vice President Mike Pence and member of the White House Coronavirus Task Force. In a video released by the group Republican Voters Against Trump, Ms. Troye recounted how Mr. Trump said in a task force meeting that one benefit of the pandemic was that he no longer would have to shake hands with his supporters.

“I don’t like shaking hands with people,” Ms. Troye quoted Mr. Trump as saying. “I don’t have to shake hands with these disgusting people.”

In fairness, Mr. Trump is a noted germaphobe whose distaste for handshaking long predates the coronavirus. But Ms. Troye emphasized that “disgusting people” referred to the well-wishers themselves, not the act of shaking hands. “Oh, he talked all the time about the people themselves being disgusting,” Ms. Troye told me in an interview on Friday. “It was clear immediately that he wanted nothing to do with them.”

Mr. Trump’s defenders shrug off such remarks with the all-purpose “That’s just how Trump talks” excuse. Indeed, many in his audiences seem happy to receive his casual scorn as playful banter.

Recently, Mr. Trump told a rally in North Carolina that he probably would not have shown up if he’d been doing better in the polls. “I would have said no, we don’t have to bother.”

In Manchester, N.H., the president said that if Mr. Biden wins the election, “I’ll be so angry at New Hampshire, I’ll never speak to you again.” He said something similar in Michigan: “Michigan, you better vote for me! I got you so many damn car plants!”

At first it was refreshing that Mr. Trump never bothered with the faux-modesty routine — “this election is not about me, it’s about you.” This struck me as one of the few truly honest parts of his act. His cartoonish self-regard seemed to buy him a certain credibility with his supporters, whose unshakable allegiance appeared to fall somewhere between true belief and being in on the joke.

It’s difficult to quantify the degree to which Mr. Trump’s base might now be softening, but there is anecdotal evidence to suggest, at the very least, a trying of patience. “I don’t think he has any respect for those who vote for him,” said one participant from Wisconsin in a focus group of people who voted for Mr. Trump in 2016 conducted by Republican Voters Against Trump. “I think he thinks he’s better than, smarter than, everybody,” said another focus group member, this one from Texas.

One of the evergreen thought exercises of the Trump era has been trying to guess what it might take to finally shake the faith of his most devoted supporters. “We’re always asking, ‘What would it take to break the camel’s back?’” said former Representative Tom Rooney, Republican of Florida, who withdrew his support for Mr. Trump in 2016 after the release of the “Access Hollywood” video.

“When the losers-and-suckers thing happened, I asked a friend of mine if that bothered him, and he said, ‘Nope,’” Mr. Rooney told me.

All that mattered to his friend was that he thought Mr. Trump was a better bet to keep his taxes low. “That was it,” Mr. Rooney said. “End of discussion.”

Mark Leibovich is the chief national correspondent for The New York Times Magazine.