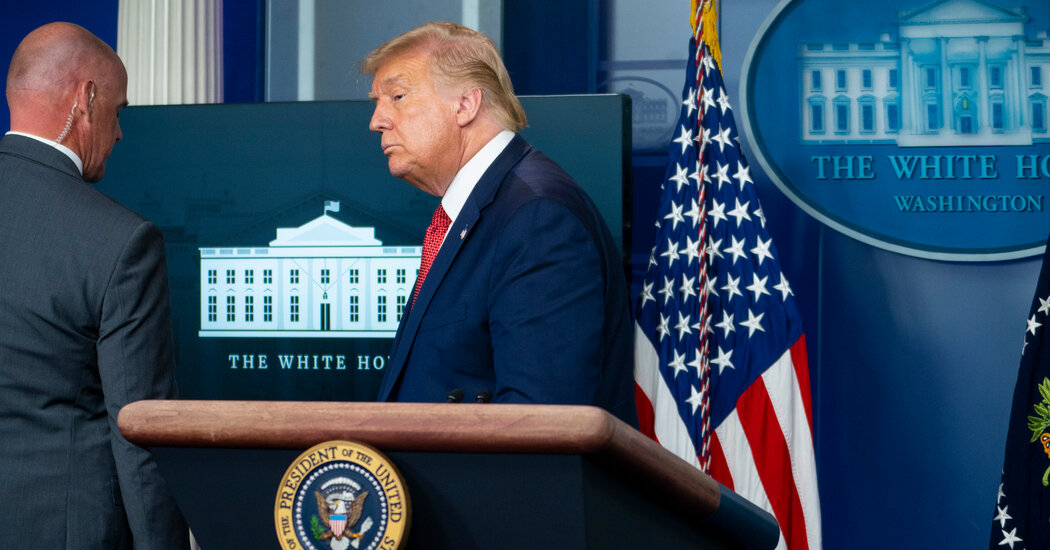 WASHINGTON — President Trump was abruptly pulled out of the White House Briefing Room in midsentence during a televised news conference on Monday after a shooting near the Executive Mansion.

Mr. Trump had just kicked off his recently revived coronavirus daily briefing with an attack on mail-in voting and a prediction that the stock market would be “topping records, hopefully soon” when a Secret Service agent standing to his right interrupted him.

“We have shots fired outside,” the agent said quietly to the president. After being instructed to leave the room, Mr. Trump and his aides — including Steven Mnuchin, the Treasury secretary, and Russell T. Vought, the budget director — calmly exited without immediate explanation.

The president returned a few minutes later to report that there had been a shooting by the Secret Service outside the White House grounds, near the fence.

Mr. Trump said that a suspect had been armed and was on the way to the hospital, but that he did not know the suspect’s condition. No law enforcement officers were injured, the president said. On Twitter, the official Secret Service account confirmed an officer-involved shooting at 17th Street and Pennsylvania Avenue, near the White House, but offered no further details. The Secret Service did not confirm the suspect had been armed.

“It might not have anything to do with me — it may have been something else,” Mr. Trump said, complimenting new fencing that has turned the White House complex into more of a sealed-off fortress as “very powerful.”

“Do I seem rattled?” he said, noting that he had simply been taken to the Oval Office. “It’s unfortunate that this is the world, but the world has always been a dangerous place. It’s not something that’s unique.”

Mr. Trump seemed eager to rehash his decision to return, processing the unusual interruption in real time with reporters in the Briefing Room. “I didn’t even consider not coming back,” the television-centric president said.

And then, almost without missing a beat, Mr. Trump picked up where he left off, noting that the “Nasdaq is setting new records.”

The president has been eager in the past to present himself as stoic in the face of potential threats to his personal safety. In May, as hundreds of protesters gathered on the streets in front of the White House, some throwing bricks and bottles, Mr. Trump and his family were briefly taken by the Secret Service to an underground bunker that has been used as a safe house for presidents during terrorist attacks.

Mr. Trump was livid that news of his visit to the bunker got out, and he later denied that it had anything to do with fear for his own safety. “I was down during the day and I was there for a tiny, little short period of time,” he claimed. “It was much more for an inspection.”

On Monday, he and his aides were eager to frame his quick return to the briefing as a macho sign of strength. Alyssa Farah, the White House communications director, tweeted an emoji of a flexing muscle and an American flag and called Mr. Trump “Our Commander-in-Chief” for quickly turning his attention back to Wall Street. Other aides described the decision to return quickly to the shutter of the cameras as “bad ass.”

Mr. Trump, for his part, appeared eager for more details about what had occurred, at one point turning to a Fox News correspondent who had reported that he heard the shots to elaborate on what he knew.