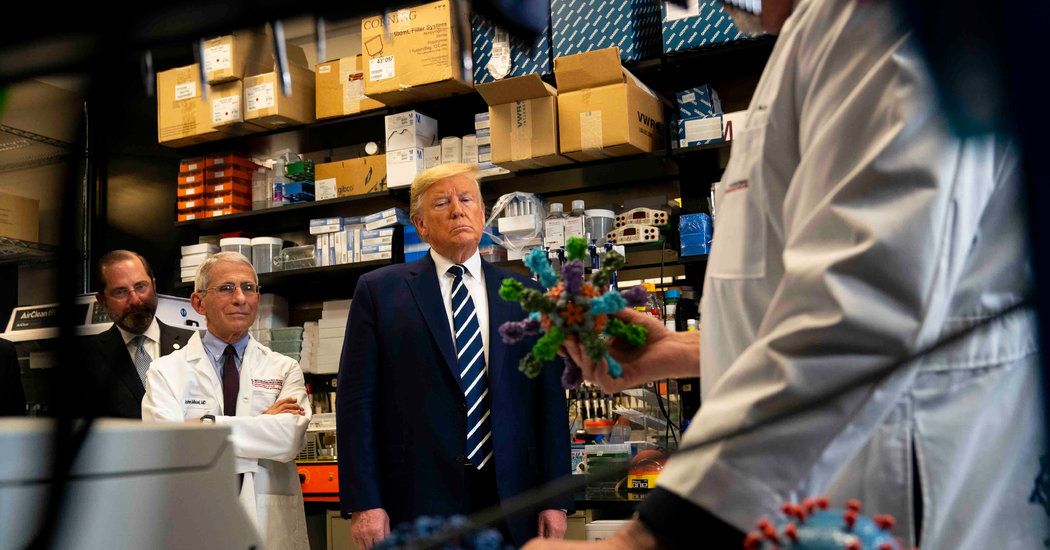 WASHINGTON — At a campaign rally this week in North Carolina, President Trump reassured the crowd that he had jawboned the nation’s pharmaceutical companies into quickly tackling the coronavirus.

“They’re going to have vaccines, I think, relatively soon,” he said.

Both health officials and drug industry executives have repeatedly told Mr. Trump that a vaccine was still a long way off. Yet by promising a vaccine “soon,” the president almost certainly misled at least some of the public into thinking a solution to the outbreak was just around the corner.

In confronting the first major health crisis of his presidency, Mr. Trump has made himself the primary source of information to the public with mixed results. Appearing before cameras sometimes multiple times a day to talk about the coronavirus, he has offered a consistently rosier assessment of the situation than health experts and has put forth unproven or even false assertions.

He originally claimed that his travel restrictions on China would “shut it down,” preventing the spread of the virus to the United States, and he has undercounted the number of infections as they have emerged. He has suggested that the virus would most likely “go away” by spring, a prediction born more of hope than knowledge. And he has minimized any economic effects.

“The market’s in great shape,” he said after stocks plummeted on Tuesday.

At times, Mr. Trump has been corrected, gently but unmistakably, by the health experts standing next to him at the microphones. On Tuesday, they brought him to the National Institutes of Health for a tour and a Virus 101 seminar of sorts, flashing slides on a screen to make points they wanted him to absorb and repeat to the public — including the timetable for a possible vaccine that, while fast for this sort of drug development, remains in the distance.

“This isn’t political, left-right, this is a scientific thing,” said Dr. Ezekiel J. Emanuel, the vice provost of global initiatives at the University of Pennsylvania and a health policy adviser to President Barack Obama. “The politicians are learning on the job. Let the experts talk about it. They’re the definitive ones and don’t make statements that have no basis in fact or are extrapolations of fact that aren’t reasonable.”

Over the past week, Mr. Trump at times has seemed to follow some of that advice, appearing with experts and inviting them to take the microphone. Dr. Anthony S. Fauci, the renowned director of the National Institute of Allergy and Infectious Diseases, has joined the president for public statements and denied that he has been muzzled.

But Mr. Trump has made clear he will be the main voice on the coronavirus. He addressed it publicly four times on Tuesday alone, while cameras were barred from the daily briefing by Vice President Mike Pence, who is managing the response along with Alex M. Azar II, the secretary of health and human services.

“I think it’s fair to say that President Trump has struggled, and that’s not surprising,” said Matthew Seeger, a dean at Wayne State University who has written extensively on crisis communications. “One of the real challenges we’ve seen is a tendency to over-reassure. There is a tendency for us to say, ‘Don’t worry, everything is going to be fine, don’t panic.’”

Mr. Trump and his allies said the problem was the other way around, that the president’s critics were too eager to proclaim doom and gloom for the purpose of hurting him politically as he headed into his re-election campaign. The president last week went so far as to call Democratic criticism the “new hoax,” although he later stressed that he did not mean that the outbreak itself was a hoax.

“Unfortunately, what we are seeing from the left and some in the media is a disgusting effort to distract and disturb the American people with fearful rhetoric and palace intrigue,” said Judd Deere, a White House spokesman. “The coronavirus is a serious situation that is changing hourly, which is exactly why Vice President Pence, Secretary Azar and the entire task force continue to lead a whole-of-government response.”

At the start of the crisis in China, Mr. Trump acted quickly and decisively to curb travel from there to the United States, a move that Dr. Fauci said on Tuesday had “really saved us a lot of hurt.”

But the president at first overstated how effective it would be, boasting to reporters last month that he had “pretty much shut it down coming in from China.”

It is unclear exactly how the virus entered the United States and whether it was carried from China, but Mr. Trump may have left the impression that he had successfully cut off its path into the United States.

Mr. Trump has also misstated the number of Americans with the virus. He said on Saturday that 22 people in the country were infected, but at that time, 70 cases had been reported. He also incorrectly described the first United States citizen to die of the virus as “a wonderful woman,” when the victim was actually a man. (The director of the Centers for Disease Control and Prevention later tweeted that Mr. Trump had been given inaccurate information.)

The president has theorized that the virus is likely to dissipate during warm weather. “A lot of people think that goes away in April with the heat — as the heat comes in,” he said. “Typically, that will go away in April.” Many health experts say that it is true of some strains of influenza and may be possible in this case, but that too little is known about the coronavirus for such predictions.

At a news conference last week, the president spoke with an optimism that even then appeared misguided. Asked whether schools should prepare for the virus’s wider spread, Mr. Trump played down the prospect. “I don’t think it’s going to come to that,” he said, “especially with the fact that we’re going down, not up. We’re going very substantially down, not up.”

“We have it so well under control,” he added.

But health officials caution that, even under the best circumstances, a vaccine would most likely not be available for widespread use before mid- to late-2021. Dr. Fauci made a point of emphasizing that more than once on Tuesday, using the slide show at the National Institutes of Health to demonstrate that while safety trials on a vaccine will begin soon and progress has been strikingly fast compared with past health crises, it will take considerable time to move to mass production if it proves safe.

“Very soon, we’ll be sticking the first person with the vaccine,” Dr. Fauci said at a later appearance with the president after landing by helicopter back at the White House. “But I want to caution everybody: That’s only the first stage of the development of the vaccine.” Over all, he said, “the whole process is going to take a year, a year and a half at least.”

Mr. Trump did not quarrel with that, but urged Dr. Fauci to tell reporters about the progress toward “therapeutics” that will combat the infection once a person has it.

Dr. Fauci noted that two large trials for such medication are underway in China and the United States that could move more quickly than a vaccine. “That may take three months. That may take five months. I don’t know,” he said. “When the trial is over and they evaluate the data, if the drug works, then you’ll be able to apply it.”

With fears of the coronavirus sending waves of concern through the country, Mr. Trump has focused as much on the economic consequences as the medical ones. He repeatedly demanded that the Federal Reserve cut interest rates to bolster the economy, but when the central bank did so on Tuesday, investors were unimpressed and markets tumbled another 3 percent.

Some critics have complained that the administration’s message on the markets has been ill considered. Larry Kudlow, the director of the White House National Economic Council, has urged Americans to “buy the dip,” saying that “stocks look pretty cheap to me.”

But some of his predecessors said such boosterism of markets from the White House set a dangerous precedent. “Making these kinds of confident assertions about the unknowable will always lead to substantial errors that undercut officials’ credibility,” said Larry Summers, who held Mr. Kudlow’s post under Mr. Obama and served as Treasury secretary under President Bill Clinton. “This is one kind of high-order blunder.”

The White House has bristled at the criticism, seeing it as insincere point scoring. Seeking to push back, Mr. Pence’s office has begun compiling praise for the administration’s handling of the crisis and sending it out to supporters and news organizations.

“Shame on Dems for trying to play politics with the Coronavirus,” Representative Steve Scalise of Louisiana, the second-ranking Republican in the House, wrote on Twitter in a message circulated by the White House. “The health and safety of Americans should be everyone’s top priority. Period.”