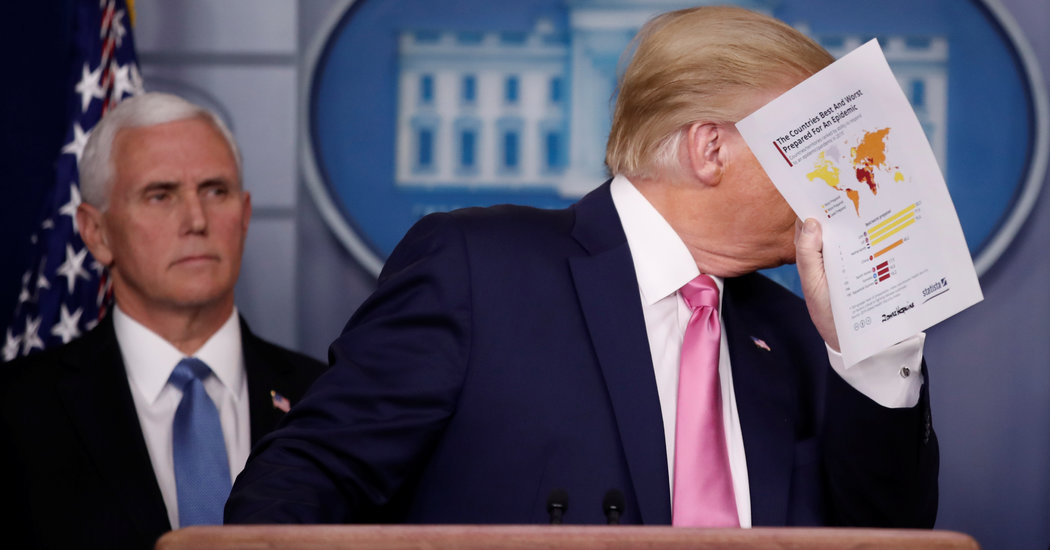 For three decades, I talked to Trump about his fear of germs. When I interviewed him at the Trump Tower restaurant during the 2016 race, the famous germophobe had a big hospital-strength bottle of hand sanitizer on the table, next to my salad, ready to squirt.

He told me about the nightmarish feeling he had when a man emerged from the bathroom in a restaurant with wet hands and shook his hand. He couldn’t eat afterward.

Today, in a stunning twist of fate, germs are infecting his presidency and threatening a bad prognosis for his re-election prospects.

Investors, who worried when Trump began to rise in politics, soon realized that he had their backs. He was just a corporate vessel pretending to be a populist; the stock market was his sugar high.

Now Trump is learning the hard way what my fatalistic Irish mother taught me: The thing you love most is the first to go. As Mike Bloomberg points out, investors have factored in Trump’s incompetence, and that is contributing to the market cratering.

The president urged the Fed to do something soon to mitigate the stock market losses. Socialism for the rich!

The scaremonger in chief has been downplaying the possibility of a coronavirus pandemic and joining Fox News hosts in accusing the “anti-Trump” media and “Do Nothing Democrats” of scaremongering about the virus.

At the CPAC convention, Mick Mulvaney told a cheering crowd that impeachment was the “hoax of the day” and now the press thinks the coronavirus “is going to be what brings down the president.” The media, he said, should spend more time on positive stories, like the president’s “caring” relationship with his teenage son, Barron, even though White Houses usually frown on stories about young presidential offspring.

Mike Huckabee went on the attack, asserting that Trump “could personally suck the virus out of every one of the 60,000 people in the world, suck it out of their lungs, swim to the bottom of the ocean and spit it out, and he would be accused of pollution for messing up the ocean.”

On Fox, Don Jr. said the Democrats “seemingly hope” the virus kills millions to stop Trump’s winning streak. Rush Limbaugh chimed in that the media “would love for the coronavirus to be this deadly strain that wipes everybody out so they could blame Trump for it.”

There are 2,800 dead worldwide and disturbing stories showing how federal criteria delayed the diagnosis of a California woman and how federal health employees interacted with Americans who had possibly been exposed to the virus in China without proper training or gear.

Yet Trump seems more consumed with how the Democrats might blame him for a coronavirus recession than with the virus itself.

Trump had tweet-shrieked at President Barack Obama about how he should handle Ebola. (“Obama should apologize to the American people & resign!”)

Yet he was so relaxed about the coronavirus threat that he spent 45 minutes Thursday chatting in the Oval with the authors of a little play called “FBI Lovebirds: Undercovers,” inspired by the texts of Peter Strzok and Lisa Page. The play’s leads, Dean Cain of “Superman” fame and the “Buffy the Vampire Slayer” actress Kristy Swanson, were also in the meeting. Trump joked that he’d be willing to be Cain’s understudy, the actor said. The president got together the same day with a group that included his social media boosters Diamond and Silk.

At the White House press conference, Trump preened: “Because of all we’ve done, the risk to the American people remains very low.” He later said that one day, like a miracle, the virus “will disappear.”

His top economic adviser, Larry Kudlow, pushed the crisis as an opportunity: “Stocks look pretty cheap to me.”

Trump won’t be able to deflect and project and create a daft alternative narrative. The virus won’t respond to conspiracy theories from Rush Limbaugh or nasty diatribes from Sean Hannity or nicknames from Donald Trump.

This will be a deus ex machina test of Trump’s authoritarian behavior. Epidemics are not well suited to authoritarian regimes and propaganda, as we saw this week when Beijing’s use of propaganda tactics to suppress information about the outbreak failed spectacularly and when Iran tamped down news about the virus for political reasons even as it ravaged top officials.

The reality of the coronavirus spreading will reflect poorly on Trump — his cavalier dismantling of vital government teams for health response and his disdain for experts and science.

Trump tried to make federal agencies complicit on his fabulist hogwash about the size of his inaugural crowd and the path of Hurricane Dorian. It is unlikely that he will be able to keep his insatiable and insecure ego in check long enough to give the nation the facts, reassurance and guidance it needs about the infection.

Trump is already doing his orange clown pufferfish routine, acting as though he knows more about viruses than anyone, just as he has bragged that he knows more about the military, taxes, trade, infrastructure, ISIS, renewables, visas, banking, debt and “the horror of nuclear.”

He appointed Mike Pence to be point man, even though, as the famously homophobic governor of Indiana, Pence helped make the H.I.V. epidemic there worse by substituting moral pronouncements for scientific knowledge. Coronavirus Czar Pence spent Friday at a $25,000-a-plate dinner in sunny Sarasota raising money to try to win back the House, The Tampa Bay Times reported.

Trump’s history in business — he makes people feel good for a while and then it ends badly — could presage a stock market crash before he exits.

And it’s conceivable that a crash — along with hospitals being overwhelmed by the uninsured — could lead to the election of a real populist promising Medicare for All.

And that would be a very Trumpian arc indeed.