WASHINGTON — President Trump named Vice President Mike Pence on Wednesday to coordinate the government’s response to the coronavirus, even as he repeatedly played down the danger to the United States of a widespread domestic outbreak.

The president’s announcement, at a White House news conference, followed mounting bipartisan criticism that the administration’s response had been sluggish and came after two days of contradictory messages about the virus, which has infected more than 81,000 people globally, killing nearly 3,000.

The announcement also came on a day when the Centers for Disease Control and Prevention reported a person with no known risk factors had been infected in Northern California.

“The risk to the American people remains very low,” said Mr. Trump, flanked by top health officials from several government agencies. “We have the greatest experts, really in the world, right here.”

The president said he would accept whatever amount of money congressional Democrats wanted to give for the virus response, adding, “We’re ready to adapt and we’re ready to do whatever we have to as the disease spreads, if it spreads.”

“We’ll spend whatever is appropriate,” he said.

Several top health care experts at the news conference echoed Mr. Trump’s optimism but also offered a more sober assessment of the future risks. Dr. Anne Schuchat, the principal deputy director of the C.D.C., warned Americans that there would be more infections.

“Our aggressive containment strategy here in the United States has been working and is responsible for the low levels of cases that we have so far. However, we do expect more cases,” she said as the president stood behind her. “The trajectory of what we’re looking at over the weeks and months ahead is very uncertain.”

About a half-hour later, Mr. Trump contradicted Ms. Schuchat’s assessment, telling reporters that “I don’t think it’s inevitable.” He left the door open to travel restrictions beyond China, to other hard-hit countries like South Korea and Italy, and said his early decision to stop flights from China had held the virus at bay.

But the C.D.C. confirmed minutes later that a new infection in California was contracted by a person who did not appear to have traveled to countries hard hit by the virus or been exposed to a known coronavirus patient. That raised the prospect that the virus was spreading through unknown means.

Health experts have questioned the C.D.C.’s decision to limit testing for the virus to people who have traveled in China or have come into contact with someone who has. Other countries are testing more broadly for the coronavirus among people from countries where outbreaks have been growing, including Italy, Iran and South Korea.

Earlier in the day, the president had accused journalists of making the situation “look as bad as possible” even as government health experts warned that the coronavirus threat in the United States was only beginning. Without offering any details on transmission, Alex M. Azar II, the health and human services secretary, confirmed the new case on Wednesday afternoon, bringing to 60 the total number of infections that have been counted in the United States. Mr. Azar said that health officials were still figuring out how the new person became infected.

The politics of coronavirus shifted drastically on Tuesday when Dr. Nancy Messonnier, the director of the C.D.C.’s National Center for Immunization and Respiratory Diseases, told reporters that “it’s not so much of a question of if this will happen anymore, but rather more of a question of exactly when this will happen.” She said that hospitals and schools should begin preparing for an outbreak, and that she had even spoken with her own family about “significant disruption of our lives.”

Mr. Trump sought on Wednesday to counter that message with a much less dire one, holding up a Johns Hopkins University study that he said showed the United States as the most prepared country in the world to confront a virus. He said he was “amazed” that tens of thousands of people died from the flu each year, contrasting that number with the several dozen currently infected with the coronavirus.

“We’re very, very ready for this, for anything, whether it’s going to be a breakout of larger proportions or whether or not, we’re, you know, we’re at that very low level,” Mr. Trump said.

The president, who is a well-known germophobe, urged Americans to be vigilant about covering their coughs and washing their hands, and he told the story of a man who recently came up to him and hugged him.

Mr. Trump has been reluctant to give in to what he considers an “alarmist” view about the virus, an administration official said. The president has repeatedly said that, like the flu, the new coronavirus will dissipate with warmer, more humid weather even though officials have warned him that relatively little is known about the virus, and it may not behave as others do.

The possibility of the virus spreading in the United States comes as the administration grapples with budget cuts and personnel moves that critics say have weakened the system for dealing with such health crises. In 2018, the White House eliminated a dedicated position on the National Security Council to coordinate pandemic response, the same year that the Trump administration narrowed its epidemiological work to 10 countries from 49.

In November, a task force at the Center for Strategic and International Studies, which included five current and former Republican senators and House members, warned that “the United States remains woefully ill prepared to respond to global health security threats” and recommended the reinstatement of an N.S.C. coordinator and a recommitment of funding and attention to global health programs.

Instead, the president’s budget request this month for the fiscal year that begins in October would cut the C.D.C.’s budget by almost 16 percent, and the Department of Health and Human Services’s by almost 10 percent. The proposal’s $3 billion in cuts to global health programs included a 53 percent cut to the World Health Organization and a 75 percent cut to the Pan American Health Organization.

And the president’s naming of Mr. Pence as his point person immediately drew partisan fire even as he vowed to ensure that the “full resources of the American government” were deployed to protect Americans from the coronavirus.

The Democratic National Committee immediately pointed out that as governor of Indiana, Mr. Pence was blamed for aggravating a severe AIDS outbreak among intravenous drug users in a rural Indiana county when he opposed calls for a clean needle exchange program on the grounds it would encourage more drug use.

It has fallen to Mr. Azar to make the case that the government is up to the task of containing the virus as anxiety grows around the world about vulnerability to a still-mysterious affliction that does not respect international borders.

New cases have popped up across Europe. Dozens of infections in Iran have raised fears of an unbridled spread in the Middle East. And the first confirmed case in Latin America has been reported — a Brazilian man who returned home from Italy just as Carnival is underway. 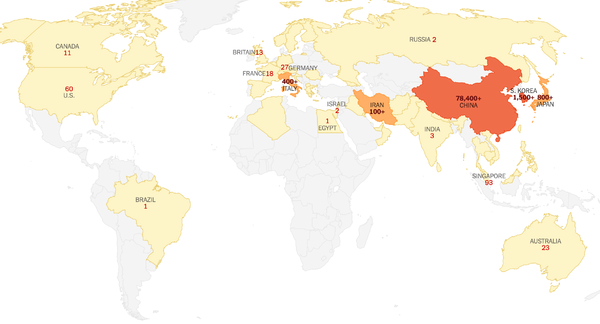 Coronavirus Map: Tracking the Spread of the Outbreak

The virus has infected more than 82,100 people in China and 44 other countries.

For the first time, more new cases were reported outside China — where the outbreak began two months ago — than inside, according to figures from the World Health Organization.

The Chinese authorities cautioned that the falling infection rate might be only temporary, while South Korean officials scrambled to contain the largest outbreak of cases outside China — including an American soldier deployed to South Korea. Across the United States, universities began bringing students home from abroad and canceling overseas study programs.

Mr. Trump has privately expressed frustration to numerous officials about his administration’s efforts confront the virus, according to someone familiar with his comments.

As recently as last weekend, the president grew furious that he had been sidelined from a decision to return some Americans infected with the virus to the United States, and he made his anger to Mr. Azar known. Officials in the White House have since wrestled with how best to present Mr. Trump with information during a fast-moving situation, one aide said.

The White House’s muscular internal messaging efforts kicked in on Wednesday. Supporters were pelted with multiple emails assuring them that Mr. Trump was overseeing an “aggressive coronavirus response,” and that the “full weight of the U.S. government” was working to safeguard Americans from illness, according to one message.

Mr. Trump’s attempts to calm the public have also occasionally been laced with a degree of alarm, with the president telling reporters on Tuesday at a news conference in India that “there’s a very good chance you’re not going to die.”

Some of Mr. Trump’s political allies tried to question the motivation of some of his top health officials for warning the public about the spread of the virus. On Wednesday, Rush Limbaugh, the conservative talk radio host, argued without foundation that Dr. Messonnier was being purposely alarmist to undermine the president because she is the sister of Rod J. Rosenstein, the former deputy attorney general who was a frequent target of Mr. Trump’s ire.

“In that town, I’m telling you, everything is incestuous,” Mr. Limbaugh said on his show. “Most of that town is establishment oriented or rooted, which means they despise Trump.”

Mr. Trump’s reassurances to the public appear at least in part aimed at calming global markets. On Tuesday, a day after its worst one-day slide in two years, the S&P 500 closed down 3 percent. The S&P 500 ended Wednesday down about 0.4 percent, bringing its losses for the week to close to more than 6 percent.

Moody’s Analytics predicted a 40 percent chance that the virus would grow into a global pandemic that would push the United States and the world into a recession. On Wednesday, Mr. Trump said he believed that “the stock market will recover; the economy is very strong.”

For a second day, Mr. Azar was on Capitol Hill on Wednesday defending his work, telling lawmakers that he was overseeing “the smoothest interagency process I’ve experienced in my 20 years of dealing with public health emergencies.”

He said that the C.D.C. had already exhausted the $105 million rapid-response fund that the federal government had been using in its initial response efforts. He has proposed shifting $136 million from other health programs to the coronavirus to replenish the government’s efforts.

A day earlier, he told a Senate panel that medical supplies were badly needed for the nation’s emergency stockpile, including 300 million masks for health care workers alone.

But on Wednesday, he faced bipartisan concern about the administration’s $2.5 billion request. Lawmakers from both parties have said the White House request is far short of what is needed and relies on the transfer of existing funds — including $535 million intended to counter the spread of the Ebola virus.

Senator Chuck Schumer of New York, the Democratic leader, proposed on Wednesday to increase the president’s emergency request drastically, to $8.5 billion in new funds, including$3 billion for a public health emergency fund, $1.5 billion for the C.D.C., $1 billion for vaccine development and $2 billion for reimbursing states and cities for efforts they have so far made to monitor and prepare for potential cases of the virus.

Mr. Trump said he would gladly accept the additional funds.