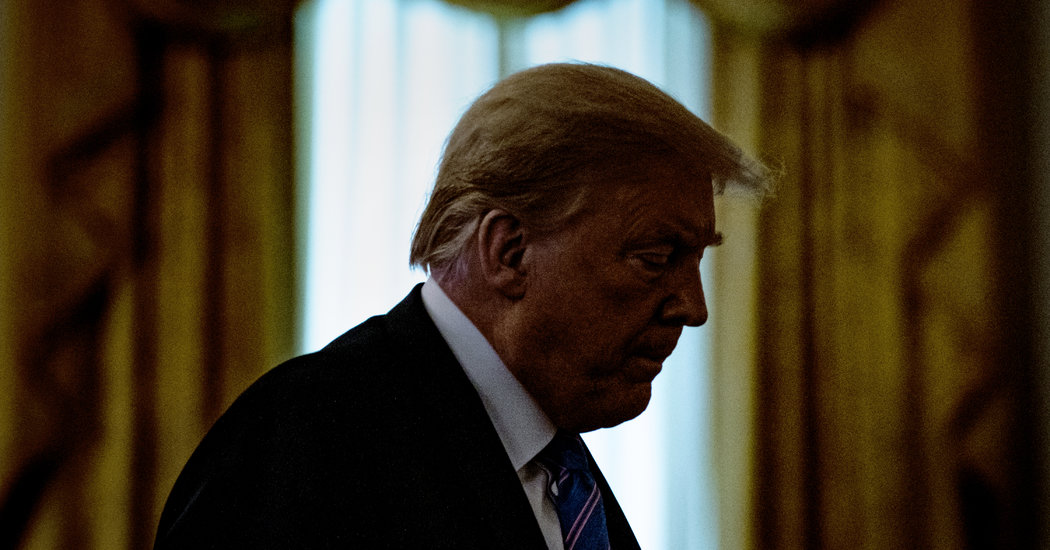 WASHINGTON — For a long time, Republicans have brandished the same old narrative to try to scare their way into the White House.

Their candidates were presented as the patriarchs, protecting the house from invaders with dark skin.

With Nixon, it was the Southern Strategy, raising alarms about the dismantling of Jim Crow laws.

With Reagan, it was launching his 1980 campaign on fairgrounds near where the Klan murdered three civil rights activists.

With Bush senior, it was Willie Horton coming to stab you and rape your girlfriend.

With W. and Cheney, it was Qaeda terrorists coming back to kill us.

With Donald Trump, it was Mexican rapists and the Obama birther lie.

For re-election, Trump is sifting through the embers of the Civil War, promising to protect America from “troublemakers” and “agitators” and “anarchists” rioting, looting and pulling down statues that they find racially offensive. “They said, ‘We want to get Jesus,’” Trump ominously told Sean Hannity Thursday night.

But Trump is badly out of step with the national psyche. The actual narrative gripping America is, at long last, about white men in uniforms targeting black and brown people.

In the last election, Trump milked white aggrievement to catapult himself into the White House. But even Republicans today recognize that we have to grapple with systemic racism and force some changes in police conduct — except for our president, who hailed stop-and-frisk in the Hannity interview.

The other scary narrative is about our “protean” enemy, as Tony Fauci calls Covid-19, which Trump pretends has disappeared, with lethal consequences. With no plan, he is reduced to more race-baiting, calling the virus “the China plague” and the “Kung Flu.” Nasty nicknames don’t work on diseases.

The pathogen is roaring back in the South and the West in places that buoyed Trump in 2016. Texas, Florida and Arizona are turning into Covid Calamity Land after many residents emulated their president and scorned masks and social distancing as a Commie hoax.

Is Trump’s perverse Southern Strategy to send the older men and women who are a large part of his base to the I.C.U.?

The president showed off his sociopathic flair by demanding the repeal of Obamacare — just because he can’t stand that it was done by Barack Obama. Millions losing their jobs and insurance during a plague and he wants to eliminate their alternative? Willful maliciousness.

And this at the same time he has been ensuring more infections by lowballing the virus, resisting more testing because the numbers would not be flattering to him, sidelining Dr. Fauci and setting a terrible example.

The Dow fell 700 points on the news that Texas and Florida are ordering a Covid-driven last call, closing their bars again, and the virus is revivifying in 30 states.

In 2016, the mood was against the status quo, represented by Hillary Clinton. But now the mood is against chaos, cruelty, deception and incompetence, represented by Trump. In light of our tempestuous, vertiginous times, Joe Biden’s status quo seems comforting.

It is a stunning twist in history that the former vice president was pushed aside in 2016 by the first black president and put back in the game this year by pragmatic black voters.

Bill Clinton was needy; he played a game with voters called “How much do you love me?” Do you love me enough to forgive me for this embarrassing personal transgression, or that one?

But Trump has taken that solipsism to the stratosphere, asking rallygoers in Tulsa to choose him over their health, possibly their lives, recklessly turning a medical necessity into a tribal signifier. I wasn’t surprised that so many seats there were empty, but that so many were filled.

In a rare moment of self-awareness, Trump whinged to Hannity about Biden: “The man can’t speak and he’s going to be your president ’cause some people don’t love me, maybe.”

It’s not only the virus that Trump is willfully blind about. A Times story that broke Friday evening was extremely disturbing about Trump’s love of Vladimir Putin. American intelligence briefed the president about a Russian military intelligence unit secretly offering bounties to Taliban-linked insurgents for killing coalition troops in Afghanistan, including Americans. Yet Trump has still been lobbying for Putin to rejoin the G7.

Trump had a chance, with twin existential crises, to be better after his abominable performance in his first three years. But then, we’ve known all along that he is not interested in science, racial harmony or leading the basest elements of his base out of Dixie and into the 21st century. Yes, the kid from Queens enjoys his newfound status as a son of the Confederacy.

A Wall Street Journal editorial Thursday warned that he could be defeated because he has no message beyond personal grievances and “four more years of himself.”

But Trump has always been about Trump. And the presidency was always going to distill him to his Trumpiest essence.

I asked Tim O’Brien, the Trump biographer, what to expect as the man obsessed with winning faces humiliating rejection.

“He will descend further into abuse, alienation and authoritarianism,” O’Brien said. “That’s what he’s stewing on most of the time, the triple A’s.”