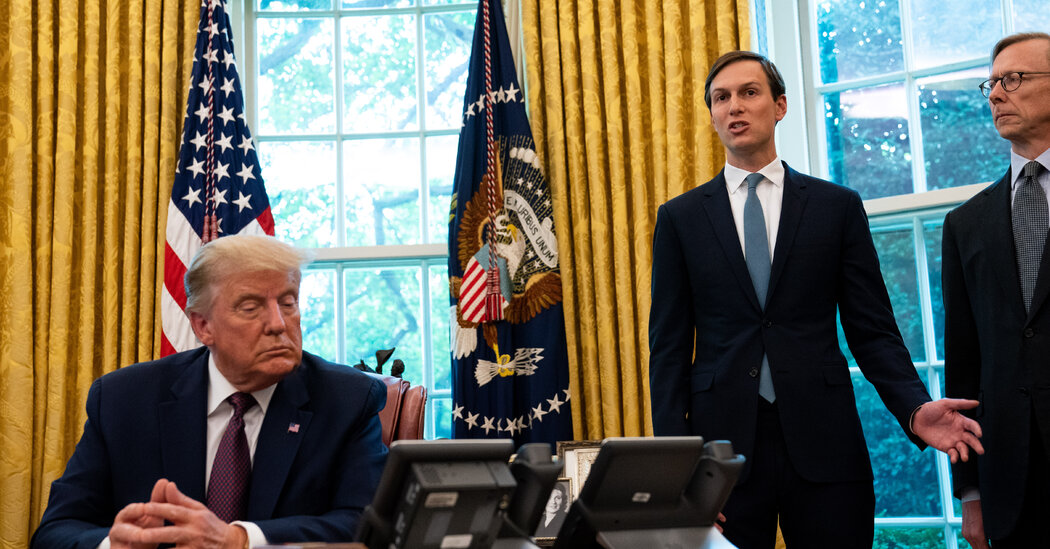 Mr. Trump’s son-in-law and his chief of staff are among those accused of violating a law designed to prevent federal employees from abusing their power.

WASHINGTON — Thirteen of President Donald J. Trump’s most senior aides — including his son-in-law and his chief of staff — campaigned illegally for Mr. Trump’s re-election in violation of a law designed to prevent federal employees from abusing the power of their offices on behalf of candidates, a government watchdog agency said Tuesday.

Henry Kerner, who heads the Office of Special Counsel, made the assertion in a withering report that followed a nearly yearlong investigation into “myriad” violations of the law, known as the Hatch Act.

“Senior Trump administration officials chose to use their official authority not for the legitimate functions of the government, but to promote the re-election of President Trump in violation of the law,” the report concluded.

Investigators in Mr. Kerner’s office said Trump administration officials purposely violated the law prohibiting political activity during the final few weeks of the administration, when they knew that the Office of Special Counsel would not have time to investigate and issue findings before Election Day.

“The administration’s willful disregard for the law was especially pernicious considering the timing of when many of these violations took place,” the report said.

Violations of the Hatch Act are not uncommon for any presidential administration. In October, Jen Psaki, the White House press secretary, apologized after an outside group accused her of violating the law by commenting in the White House press room on the pending governor’s race in Virginia.

But the Kerner report describes something more rare: a concerted, willful effort to violate the law by the most senior officials in the White House. The Washington Post disclosed the report’s release earlier on Tuesday.

The report said that Mr. Pompeo and Mr. Wolf violated the law through their actions during the Republican National Convention, which took place at the White House because of the pandemic.

It said Mr. Pompeo campaigned illegally “by changing U.S. Department of State (State Department) policy to allow himself to speak at the convention and then, when engaging in political activity by delivering that speech, using his official authority by repeatedly referencing the work of the State Department.”

Mr. Wolf “violated the Hatch Act by presiding over a naturalization ceremony that was orchestrated for the purpose of creating content for the convention,” the report said.

The rest of the officials broke the law by overtly campaigning “during official interviews or media appearances.”

“The administration’s attitude toward Hatch Act compliance was succinctly captured by then-Chief of Staff Mark Meadows, who said during an interview that ‘nobody outside of the Beltway really cares’ about Trump administration officials violating the Hatch Act,” the report said in its executive summary.

Noah Bookbinder, the president of Citizens for Responsibility & Ethics in Washington, which filed complaints about the actions of Trump administration officials, on Tuesday praised the report from the Office of Special Counsel.

“This report confirms that there was nothing less than a systematic co-opting of the powers of the federal government to keep Donald Trump in office,” Mr. Bookbinder said in a statement. “Senior Trump administration officials showed an open contempt for the law meant to protect the American people from the use of taxpayer resources and government power for partisan politics.”

The Office of Special Counsel report notes that none of the people named will face any punishment for their violations because it is up to the incumbent president to discipline his top employees.

“President Trump not only failed to do so, but he publicly defended an employee OSC found to have repeatedly violated the Hatch Act,” the report said. “This failure to impose discipline created the conditions for what appeared to be a taxpayer-funded campaign apparatus within the upper echelons of the executive branch.”

Emails to several representatives of Mr. Trump were not answered.