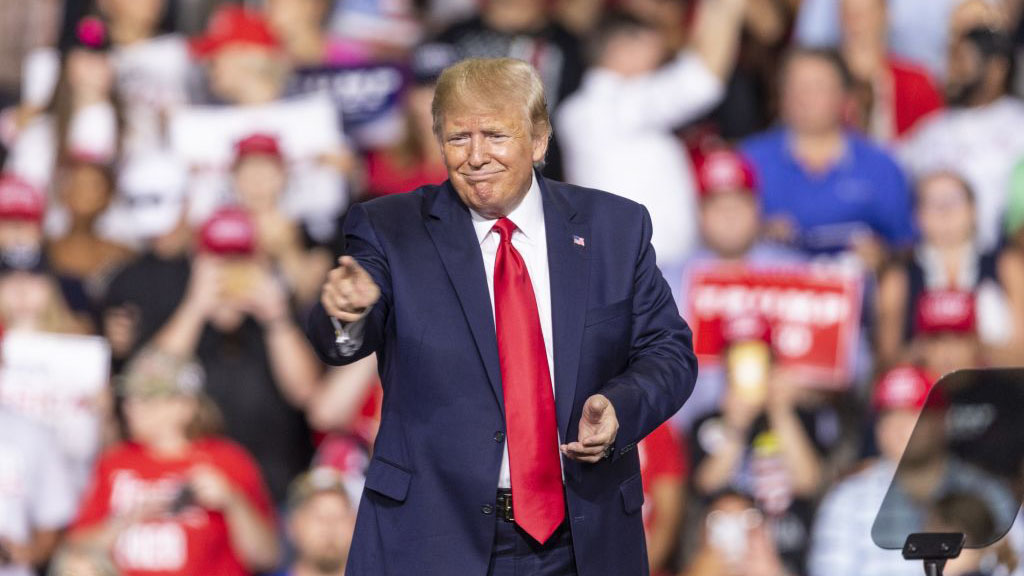 The postponement comes with Tropical Storm Fay heading for New England Friday and Saturday. McEnany cited the “big storm” when she announced that the rally would be delayed.

There are renewed concerns over President Trump’s rally scheduled this weekend in Portsmouth, New Hampshire, after the spike in cases following his visit to Tulsa, Oklahoma.

The Trump campaign confirmed the delay, its communications director releasing a statement that said, “The rally scheduled for Saturday in Portsmouth, New Hampshire has been postponed for safety reasons because of Tropical Storm Fay. It will be rescheduled and a new date will be announced soon.”

Two local Black Lives Matter groups said a protest they’d organized for Saturday afternoon was being postponed as well. “When his campaign reschedules this event, we’ll be there to protest it, rain or shine,” they said in a statement.

Trump flew to Florida Friday morning for his first in-person fundraiser in a month, and that was supposed to be followed by the rally Saturday night at Portsmouth International Airport — the first steps back out onto the road Friday after a multiweek hiatus caused by a nationwide surge in coronavirus cases and after his planned comeback in Oklahoma turned into a debacle

Trump, trailing in the polls, is eager to signal that normal life can resume despite a rampaging virus that has killed more than 130,000 Americans.

Trump’s rally in Portsmouth was scheduled after aides spent weeks studying what went wrong in Tulsa three weeks ago. The Tulsa event was billed as a massive, defiant return to the political stage but instead produced a humiliating sea of empty seats and questions about the campaign’s ability to attract people to large events in a pandemic.

It was unclear how many people planned to attend the New Hampshire rally, campaign officials had acknowledged. Conceding that another sparse crowd would raise questions about the future of Trump’s rallies, the campaign took additional steps to make attendees feel safe.

Unlike the one in Tulsa, which was held indoors where the virus more easily circulates, the rally in Portsmouth was scheduled to be partially outdoors, held in an airplane hangar open on one side with the crowd spilling out onto the tarmac before Air Force One.

With news that President Donald Trump is heading to the Granite State to hold a rally later in the week, some business owners in nearby Maine are worried about a potential coronavirus outbreak caused by people attending the event.

Moreover, while masks were distributed in Tulsa, few rallygoers wore them after weeks of Trump deriding their use. This time, the campaign had strongly encouraged their use.

The venue is significantly smaller than the cavernous Tulsa arena, and aides were deliberately setting lower expectations for crowd size. Before the Oklahoma event, which spurred days of protests, campaign manager Brad Parscale boasted that a million ticket requests had been received. The Tulsa fire marshal said 6,000 people attended.

New Hampshire has had a relatively low number of COVID-19 cases, while those in Oklahoma were rising before Trump arrived. Oklahoma health officials said the rally and accompanying protests “likely contributed” to a surge in infections in the city. Several campaign staffers and Secret Service agents tested positive for the virus.

But Tropical Storm Fay, which formed in the mid-Atlantic Thursday afternoon, is forecast to bring heavy rainfall and possible flooding to parts of New England, passing just west of New Hampshire on Saturday morning.

Trump’s Friday fundraiser takes him to terrain where COVID-19′s surge threatens his hold on a must-win state and raises questions about Republican aims to hold their nominating convention in Jacksonville next month. Trump will also hold a small event supporting the people of Venezuela and visit U.S. Southern Command in Miami to highlight a reduction in the flow of illegal drugs into the United States, though much of the credit belongs to the pandemic, which has paralyzed economies, closed borders and severed supply chains.

President Donald Trump will travel to New Hampshire for a Portsmouth rally.

Despite the risks, the Trump campaign believes it needs to return to the road, both to animate the president, who draws energy from his crowds, and to inject life into a campaign that’s facing a strong challenge from Democratic candidate Joe Biden.

“The campaign feels he needs to be out there, but every time he speaks in front of crowds, there is a chance the virus spreads,” said Julian Zelizer, a presidential historian at Princeton University. “But it’s just as bad if he comes out to an empty crowd, which could be a sign that people are not enthused or they are scared.”

The choice to hold the rally in New Hampshire, where the president is trailing significantly, in part reflected the current lack of options, said four campaign officials and Republicans close to the endeavor who spoke on condition of anonymity because they weren’t authorized to publicly discuss internal deliberations.

The New Hampshire Democratic Party slammed Trump for his response to the pandemic in a statement following the news of Saturday’s upcoming rally in Portsmouth.

Battleground states with Democratic governors, such as Michigan and Pennsylvania, have indicated they wouldn’t waive health regulations to allow large gatherings, though the campaign will be willing to legally contest that in time, according to the officials. New Hampshire Gov. Chris Sununu, a Republican, had said he would greet Trump at the tarmac on Saturday but wouldn’t attend the rally.

Advisers had said local officials in other states would be watching how Saturday’s event went. He has faced persistent questions over his handling of the pandemic and the acceleration of his use of racial tensions as a reelection weapon.

Part of Trump’s inflammatory appeal has been a defense of Confederate symbols, which he has twinned with a defense of the Founding Fathers. There has been talk of displaying statues of American heroes at the rally, two campaign officials said. Aides also previewed a renewed attempt in the coming days to link Biden to the liberal wing of his party, including Reps. Alexandria Ocasio-Cortez of New York and Ilhan Omar of Minnesota.

At a roundtable meetings about reopening schools, President Donald Trump praised the U.S. response to the coronavirus in limiting the number of Americans who have died, saying, “We saved of thousands of lives, hundreds of thousands of lives… we’re at [130,000 deaths] and we could be at way over a million right now and I think it could have been 2.5 or 3 million people.”

Trump narrowly lost New Hampshire in 2016. Before the pandemic, the state was on a short list along with Minnesota and New Mexico that the Trump campaign hoped to flip from blue to red. Advisers believe the states could be in play again if the economy rebounds.

The Trump campaign has also been eager to return to the road to draw a contrast with Biden, whom it’s painted as being marooned in the basement of his Delaware home.

Biden has been unapologetic about following recommendations from public health officials amid the pandemic. He’s conducted regular online fundraisers and campaign events from makeshift television studios at his house, while sitting for remote video interviews with national networks and local stations in battleground states. He holds regular telephone, video and some in-person meetings with advisers.

“For the over six months during which Donald Trump has atrociously mismanaged this unprecedented outbreak, the American people have been crying out, ‘where is our president?’ because Donald Trump has been anything but one,” said campaign spokesperson Andrew Bates.

Biden has traveled by car around Delaware or nearby Pennsylvania for a handful of events, and, in a contrast to Trump, wears a mask and observes social distancing guidelines.